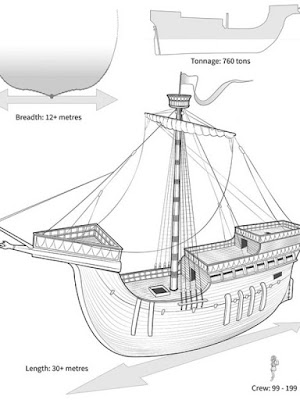 Holigost was rebuilt from a captured Spanish ship and named to reflect Henry V's personal devotion to the Holy Trinity.

A timber vessel believed to be one of Henry V's "great ships" has been found in a river in southern England, heritage group Historic England has announced.

Experts from Historic England believe the wreck that lies buried in mud in the River Hamble near Southampton is the Holigost (Holy Ghost).

A major part of Henry V's war machine, the ship played a key role in two sea battles that enabled him to conquer territory in France in the early 15th century.

"To investigate a ship from this period is immensely exciting," said Duncan Wilson, chief executive of Historic England.

"It holds the possibility of fascinating revelations in the months and years to come."

The announcement comes two weeks before events to mark the 600th anniversary of the Battle of Agincourt.

On October 25, 1415, Henry led his troops to a major English victory in the Hundred Years' War near what is now called Azincourt in northern France, a battle immortalised by William Shakespeare in Henry V.

The 600-year old ship was discovered next to the king's flagship, the Grace Dieu — itself found in the 1930s — by historian Ian Friel after examining aerial photographs of the "medieval breaker's yard".

"There is the real possibility that the remains of this ship still survive in the River Hamble," he told BBC Radio 4.

Historic England will conduct a sonar survey and timber sampling "to confirm or not if it's the Holigost", he added.

The Holigost joined the royal fleet on November 17, 1415 and suffered serious damage at the Battle of Harfleur in 1416.

It was rebuilt from a captured Spanish ship, the Santa Clara, and was named to reflect Henry V's personal devotion to the Holy Trinity.

It was deliberately docked after 11 years of service having sprung several leaks, according to Mr Friel.

One of Henry VIII's warships, the Mary Rose, which sank in 1545, was salvaged in 1982 in a feat of maritime archaeology that provided a wealth of detail about life in Tudor times.

The ship is due to be displayed dry in the Mary Rose Museum in Portsmouth after painstaking and expensive conservation work to preserve its timber hull.