Rome versus Carthage: the war for mastery of the Mediterranean 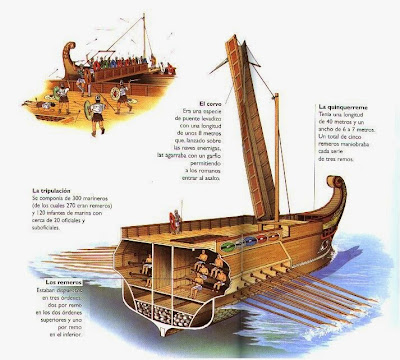 With the three Punic wars (264-241, 218-202 and 148-146 BC) Rome and Carthage became locked into a Hundred Years War. Control of the Mediterranean at once became the issue in a contest which would end only with the death of one of the adversaries. When Rome took Rhegium in 270, the Carthaginians placed a garrison across the water in Messina. The two political monsters – on one hand Italy, united from the Po valley to the Gulf of Tarentum; on the other North Africa, from northern Cyrenaica to present-day Morocco, backed up by southern Spain – eyed each other across the narrow straits. They were well-matched adversaries, capable in fact of coming to terms, as earlier treaties had demonstrated. It would, moreover, be inaccurate to describe their confrontation as one between a sort of gadfly (Carthage, the maritime power) and the heavy-footed soldier (the Roman legions). Carthage was no less expert than Rome at building roads and bridges, and its agriculture was well developed, while Rome had been interested in the Mediterranean since well before 264 b c. It had had dealings with the cities of Greater Greece, and merchant shipping was active along Italian coasts.

As for Rome’s fleet, the normal components, triremes and quinqueremes, long vessels with three or five stepped rows of oarsmen, took only a short time to build. In 260, at the outset of the wars, Rome launched a fleet of 100 quinqueremes and thirty triremes, plus some other ships, all in the space of sixty days; in 254, the Romans launched 220 vessels in six months. We need not take these figures quite literally perhaps, but the ships were certainly assembled very rapidly, probably too quickly for their quality not to suffer, as had already been the case in Greece. As a result, these navies did not last long, sometimes only the space of a single campaign.

Early in the war, some sources report, the Italian shipyards had copied a Carthaginian quinquereme which had fallen into Roman hands. That is not impossible. The quinquereme was a monstrous ship, developed in Cyprus or Phoenicia before Alexander’s campaigns. Of the western Greek cities, only Syracuse had built quinqueremes. But it was child’s play to copy the design. Supplies of timber were no problem for Rome: the peninsula still had many forests. The Greeks in the Gulf of Tarentum had timber for boatbuilding delivered from the Sila massif in Bruttium. The Romans had it floated down the Tiber to Ostia. In this respect, Carthage was at a disadvantage, since it had to look to Sardinia for timber supplies.

These longships might be easy to build but they were costly to operate, particularly since they could be used only on calm summer seas and over short distances, such as between Italy, Sicily, Malta, the Lipari Islands, the Egadi Islands and the nearest points on the North African coast. What was more, they required huge numbers of men: sailors, oarsmen, soldiers – as many as four hundred in each ship, according to Polybius. Overall, this was an extraordinarily expensive war: with both sides equally committed, it was bound to become a matter of attrition.

In 264 BC, Rome had effortlessly occupied Messina, having been called upon by the then rulers of the city, the Mamertines, a rather remarkable band of adventurers who had betrayed the Carthaginian garrison. After imposing a peace settlement on Hieron of Syracuse, the Romans began the siege of the western cities: Agrigentum fell during the winter of 263-262, and 25,000 captives were sold into slavery. In 254, almost ten years later, it was the turn of Panormus (Palermo), another Carthaginian stronghold: here 10,000 of the inhabitants were reduced to slavery. At sea, in 260, one Roman fleet was defeated off the Lipari Islands, but a second one, under the command of the consul C. Duilius Nepos, was victorious off Mylae (Milazzo), thanks to the grappling irons and boarding planks which the Roman sailors used against the enemy. The Carthaginian vessels, which were easier to manoeuvre, were thus cheated of their advantage and boarded by force: the naval battle became hand-to-hand combat, just as if it were being fought on land (and this was to be the rule for centuries to come, in encounters between galleys). From now on, Rome felt sufficiently confident to confront Carthaginian vessels along the African coast. In 256, an expeditionary force was landed on Cape Bon. It wintered in Tunis, but was crushed the following year: the unfortunate commander was the consul Atilius Regulus.

The tide did not yet turn in Carthage’s favour. However, the city had found in Hamilcar Barca a commander of genius, who had dug himself in on two fortified and impregnable mountain tops in Sicily: Mount Heircte, near Palermo and Mount Eryx near Drepanon (Trapani). His troops launched raid after raid, and the Punic ships also engaged in some fruitful piracy. This low-key war worked against Rome’s interests. The Republic lost 700 ships to storms, pirates and the enemy navy. Carthage now launched a massive fleet, but Romans and Greeks combined in a stupendous effort and crushed it in 240 off the Aegates Insulae (Egadi), off the western tip of Sicily.

The disaster brought Hanno and the peace party to power in Carthage. Rome was able to impose draconian peace terms. Sicily was now in Roman hands and Rome took immediate advantage of Carthage’s grave internal problems to lay hands on Sardinia and Corsica. Weakened by an uprising in Libya and a savage revolt by its own mercenaries (who were owed large sums in back pay), Carthage was obliged to accept Rome’s conditions; it managed to retain the rights only to levy soldiers and load grain in Italy.

After the Sicilian disaster, however, and the crushing of the mercenaries’ revolt in 238, Hamilcar Barca had gone to Spain with the remnants of his army in 237. Thus began the conquest of Spain, effected by the powerful and proud Barca dynasty. The operation meant capturing the Guadalquivir valley and the high plain of Castulo, forcing a passage to the Mediterranean (the later route of the Via Augusta) and establishing a stronghold in eastern Spain where New Carthage (Cartagena) was founded by Hamilcar’s son-in-law, Hasdrubal. In c. 225, Rome made the Carthaginians promise not to cross the Ebro or disturb the Roman colonies which had been settled from Marseille along what is now the littoral of Catalonia. But the occupation of the Iberian peninsula along its two major axes, the Guadalquivir and the eastern seaboard, gave Carthage direct access to the precious Spanish silver mines and the possibility of cornering their production. A few years later the mint in Cartagena was turning out 300 silver pounds a day. In Carthage itself, beautiful coins stamped with fine images of animals – horses and elephants – testify to this age of prosperity.

Hamilcar had, however, been killed in 231, in an encounter with local forces. Ten years later Hasdrubal was assassinated. His nephew Hannibal, son of Hamilcar, was acclaimed commander of the army: a breathtaking career was about to begin.

Neither Rome nor Carthage had in fact abandoned the struggle. Each side spied on the other, fearing its might. Rome had to deal with severe unrest in Sardinia and Corsica, where the local tribes were as recalcitrant as the Samnites. There was an even graver threat in northern Italy, where, after some inconclusive campaigning, Rome had struck at the Gauls in 225. Six years later, the Latin colonies of Piacenza and Cremona were founded, but these were fragile outposts. The colonies themselves provoked the uprising of the Boii. And all the while, war was once more brewing between Rome and Carthage.

Which would strike first? Hannibal, who had taken Saguntum and crossed the Ebro in April 218? Or the Roman fleet stationed at Lilybaeum, which, after a preemptive occupation of Malta, was preparing to sail to Africa? In September 218, Hannibal crossed the Alps – his exact route is still unknown – and descended with fewer than 30,000 men into the Po Valley. In December that year, he was victorious in the battle of the Ticino. In January 217, on a snowy day, he triumphed at Trebbia; on 23 June, he crushed a Roman army at Lake Trasimene in Etruria. Then, although delayed by the tactics of the dictator Fabius Cunctator, he had the good fortune to win his greatest victory yet, at the battle of Cannae on 2 August 216. But for reasons that remain obscure (not enough men, not enough siege equipment?) he failed to march on Rome, lingering among the fleshpots of Capua, that other Rome, which had ‘abandoned itself’ to him. The following years brought him some successes (he held Tarentum from 213 to 209), but once hemmed in in southern Italy, he was not well supported by Carthage. The defeat on the banks of the Metaurus in 207 of his brother Hasdrubal, who was bringing substantial reinforcements from Spain, sealed his fate.

Taking refuge in Bruttium (Upper Calabria) he remained there for years, his escape route cut off by Roman legions, just as his father had been cornered on the slopes of Mount Eryx. Rome meanwhile struck a series of telling blows: Cartagena was taken in 209 and Scipio landed in Africa. Hannibal was recalled and the battle of Zama (202) finally marked the end of the second Punic war.
Posted by Mitch Williamson at 12:31 AM