The Successors and Naval Competition 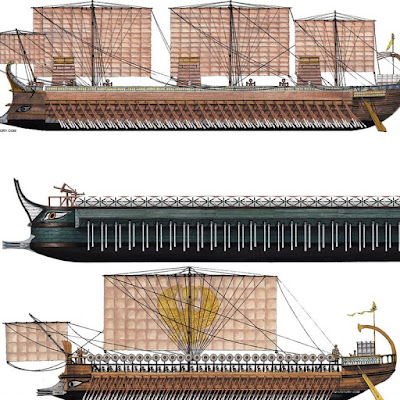 Hellenistic war galleys with a Trireme on bottom, Quinquereme in middle, and the top is a massive Polyreme with a crew of 4,000.


In the wake of the disastrous Athenian invasion noted above, Dionysus of Syracuse had seized power and built up the influence of Syracuse over eastern Sicily, working mainly against the increasing influence of Carthage, originally a Phoenician colony in North Africa, over the island. It was probably the maritime power of that opponent, rather than the experience of the war with Athens, that prompted him to use the increased resources of the city and its expanding possessions to build up his navy. Crucially, he did not simply build large numbers of triremes but began experimenting with tetreres and penteres-four-fitteds and five-fitteds-purportedly inventing the latter. What the arrangement of rowers in these larger ratings was is still a matter of some, but they were clearly larger, more powerful, ships than triremes, and they upped the ante still further in naval competition. By the time of the Battle of Amorgos, in 322 BCE, both the Athenian and Macedonian fleets had substantial numbers of fours and fives (50 fours and 7 fives for Athens) alongside their triremes, while Dionysus II, son of the inventor of fives, had introduced sixes into the Syracusan navy by the 340s.

After Alexander died, the competition among his generals resolved itself after two decades into a three-way competition between the Seleucid dynasty in Asia, the Antigonids in Macedon, and the Ptolemies in Egypt. The first remained exclusively a land power, but the latter two engaged in a fierce naval competition that stimulated further developments in the architecture of warships. Antigonus and his son Demetrius initially led the way, with Ptolemy and his successors playing catch-up, although eventually the largest ships were Ptolemaic.

Fours, fives, and sixes could have been created simply by adding an extra rower to the oars on one, two, or all three tiers-that is, by slight modifications to the trireme. But putting more than two men on an oar entails a significant change in the style of rowing. More than two men cannot row from a seated position but must, due to the length of the oar, stand to get the oar into the water at the start of the stroke and then fall back onto the bench. It seems to have been Demetrius who initially designed the new kind of ship that could accommodate this style of rowing when he introduced sevens into his navy.

The broader hulls required to accommodate extra rowers on the oars would have reduced maneuverability somewhat at the expense of raw power and size, but such ships had corresponding advantages. Putting multiple men on an oar provided extra power without demanding extra numbers of skilled rowers, for only the man at the head of the oar needed to be trained; the others simply supplied muscle. For the large kingdoms with abundant untrained manpower, such ships thus allowed expansion of naval manpower without the training- or indeed, political-issues raised by the skilled crews of triremes. Furthermore, while reduced maneuverability corresponded with a decrease in ramming tactics (though all warships retained rams for opportunistic use), broader hulls meant more deck area on which to carry marines for boarding tactics and catapults or other large missile weapons as anti-personal or possibly even ship-killing weaponry. Here, too, such navies favored large, autocratic states with abundant manpower.

The obvious advantages of size and numbers of marines for naval combat in this environment pushed designers to build ever-larger ratings. Tens and elevens became common, and from twelves to twenties not uncommon, and by the mid-200s, Ptolemy II was building thirties that performed well and saw action. But there is no arrangement of three tiers of oars with up to eight men to an oar that can produce a thirty, never mind the forty constructed by Ptolemy IV around 205. These two, the top ratings ever built, were clearly double-hulled ships-oared catamarans made of yoked together fifteens or twenties, connected by a broad deck that could have carried hundreds of marines.

The sight of these monsters, almost like oared aircraft carriers, clearly impressed contemporaries who wrote about them. And they were meant to. Ptolemy IV's forty never saw action and was probably designed from the start as a ceremonial ship meant to show off the monarch's wealth, power, and grandeur. In this respect, the Hellenistic naval competition was psychological as well as military and paralleled cultural and political developments in other areas of the Hellenistic world, which had moved a long way from the small, sometimes democratic city-states that had launched trireme fleets.

But the naval arms race between the Successor Kingdoms of the eastern Mediterranean had reached a sort of stalemate by the beginning of the second century BCE and would be brought to a conclusion not by any of the powers engaged in it, but by the winner of another naval competition going on at the same time in the western Mediterranean.
Posted by Mitch Williamson at 6:11 PM