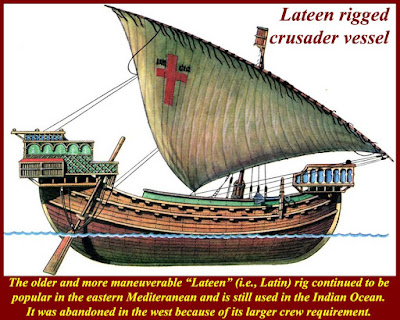 In sailing vessels, the manner in which masts and sails are carried. The two basic types of rig are square and fore-and-aft. When combined, a vessel is said to be square-rigged. The two basic types can be subdivided into more specific vessels such as cutter, barque, and brig. Toward the end of the commercial sailing-ship era, the tendency was to do away with square sails in favor of fore-and-aft rigs because of the lower labor costs.

The square sail, set on a transverse yard but without a boom to stiffen its lower edge, was probably still the commonest sailing rig, although it has been suggested that it was used in the manner of a fore-and-aft sail as much as for simply running before the wind. To suit wind conditions, sail area could be reduced by tying tucks in the canvas with reefing points, or increased by lacing on additional strips of canvas, later called bonnets. The triangular fore-and-aft lateen sail, familiar in the Mediterranean continuously from antiquity to the present day, was adopted in Europe for the carrack, the foremost trading vessel of the thirteenth and fourteenth centuries. This was square rigged on foremast and mainmast, with the lateen sail on the mizen (stern) mast, and with a cog hull.

Quite suddenly, and by a chain of development which it has not yet been possible to trace fully, the three-masted square-rigged ship succeeded the carrack in the mid-fifteenth century. The additional masts and increased sail area made them more manoeuvrable than their single-masted predecessors and better able to sail to windward, square sterns provided improved accommodation, and they became progressively larger. They offered the technical conditions for oceanic voyages, and opened up the great age of discovery.

The original form of the three-masted ship never changed fundamentally, although it was greatly modified over the course of time. It carried a fore- and mainmast set with square sails only, the fore usually slightly shorter than the main, and a much shorter mizen with one square sail (later more) and a fore-and-aft sail set aft of the mizen and later known as a spanker. Forward there was a bowsprit, inclined at about 30° and projecting beyond the stem, carrying headsails. Originally the headsails were square, set on a yard under the bowsprit and on a small mast rigged in a perilous-looking way at its end. Towards the end of the seventeenth century these were replaced by triangular fore-and-aft sails set on stays running from bowsprit to foremast, which did their work far more effectively; later, similar sails were set between the masts.

Other improvements came with the increasing size of ships, and with the need to carry more sails for greater speed; individual sails became larger and increased from one or two to three or four on each mast by 1800. The masts themselves, becoming loftier and more square in proportion, soon outran the average tree and had to be assembled from two or three sections, one above the other; often, too, the largest sections had to be ‘made’ from smaller timbers. Sails were cut better and set more tautly to obtain the best from the wind: blocks, containing pulleys to increase manual capacity when hauling on ropes, appeared at an early stage, and multiple blocks with metal sheaves and bearing made running rigging easier to work.
Posted by Mitch Williamson at 2:43 PM