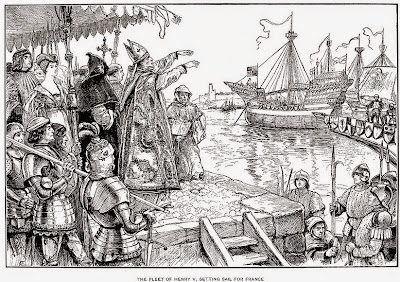 Naval forces played an important role in successive English invasions of Scotland, Ireland, and Wales, and in the defense of those lands by their Celtic populations. Ships were also essential to English fortunes in the Hundred Years’ War (1337–1453), which had a crucial naval component that is too often overlooked. English monarchs back to the 11th century purpose-built fleets of warships, but each time the effort to sustain a navy lapsed and the ships were sold off to private interests. Even the ‘‘Great Ships’’ commissioned by Henry V were left to rot by his successors, sold off after his death, or burned by accident. In the 14th century a rudimentary naval administration was set up under the ‘‘Clerk of the King’s Ships.’’ Naval financing was managed within the royal household through accounts in ‘‘The Chamber’’ and ‘‘The Wardrobe’’ (later, ‘‘Great Wardrobe’’), which eventually took responsibility for naval gunnery and small arms, delivery of ships and crew, repair and resupply. The state of ‘‘royal ships,’’ or warships owned directly by the crown, from the 14th to the 17th century reflected the state of the monarchy: the ‘‘navy royal’’ waxed under the vigorous later Tudors but waned under the maladroit early Stuarts. Upon the death of Henry VIII in 1547 the Royal Navy had 53 warships of all types and sizes. The fleet declined briefly under Edward VI and Mary Tudor but building and repair resumed under Elizabeth I, with special attention paid to galleon construction and cruising warfare. In J. R. Hill’s words, the Royal Navy finally arose ‘‘through a blend of fear, ambition, curiosity, and trial and error.’’ A consensus among naval historians assigns the pedigree of the modern Royal Navy to the fleet of warships assembled by Elizabeth. At its height the Elizabethan navy consisted of 34 royal ships, 13 of which exceeded 500 tons displacement, with many more privateers sailing under letters of marque, along with impressed and armed merchant ships.

The Royal Navy deteriorated spectacularly under the early Stuarts. James I and a tepid House of Commons laid up the royal ships or sold them off or allowed them to rot in port. Great corruption returned to naval administration and privateering was abolished by James (who actually beheaded Walter Raleigh for it), even though the English merchant marine was exposed to predations by Dunkirk and Barbary pirates operating from the Newfoundland and Iceland fisheries to the Narrow Seas. This shift surely came about in large part because, except for pirates, there was no continental threat to England during this period: Europe was exhausted by war, embraced the Twelve Years’ Truce (1609–1621), then plunged into the first years of the Thirty Years’ War (1618–1648) with indifference to England. Charles I and Buckingham did no better in terms of management and much worse in combat, bringing humiliation to English seamanship and England’s naval tradition.

Despite the Royal Navy’s Elizabethan heritage, most naval historians date England’s true permanent navy, and especially its conscious national policy of pursuit of sea power, to the English Civil Wars (1639–1651) and Commonwealth era. The victory by Parliament, which most navy men supported, put naval finance on a sound footing for the first time. From 1649 to 1660 Parliament built or purchased 207 new warships, adding these to an original fleet of just 39 ships. The Puritan revolution also raised to power men opposed to the monopoly charter companies favored by the monarchy. These new men wanted naval protection from Channel pirates and foreign privateers which the Stuart kings failed to provide. They were devoted to radical Protestantism, colonialism, and the self-conscious idea of England as a major sea and world power. They supported financing for a permanent navy to be used to block Catholic nations from overseas expansion while protecting their, and England’s, commercial and colonial interests. The Commonwealth navy subsequently demonstrated professionalism, seamanship, and martial superiority against a comparably fine Dutch navy during the Anglo-Dutch Wars. Reconstituted as the Royal Navy upon the Restoration, sea power took a special place in English national consciousness and policy ever after.

Cinque Ports.
Five strategically located English ports first listed in a Royal Charter in 1155: Dover, Hastings, Hythe, New Romney, and Sandwich. Rye and Winchelsea were added a few decades later, and seven more towns were associated with the Cinque Ports in the 15th century. In theory, these ports were obliged to provide 57 ships and supporting crew for a fortnight’s service upon notice from the crown, in exchange for special privileges amounting almost to self-governance. This was the only compulsory naval service in England before the introduction of demurrage and impressment. From time to time the Cinque Ports gave service to the crown when a war was in their own interest, notably in the 13th century. Thus, the majority of ships used to transport and supply Edward I in his conquest of Wales, 1277–1283, came from the Cinque Ports: 25 in 1277 and another 40 in 1282–1283. During the Hundred Years’ War (1337–1453), ships from the Cinque Ports accompanied numerous English expeditions, but so did ships from other coastal towns. The Black Death ravaged the Cinque Ports, as did major raids and burnings by the French and their allies. The move to a permanent navy in the 16th century eliminated any rationale for special privileges, in addition to which some of the harbors of the Cinque Ports silted badly.

‘‘sovereignty of the sea.’’
An English naval and political doctrine proclaimed in 1293 by Edward I, who had been summoned before a Paris court to explain why he had permitted his Gascon subjects to attack their liege lord, the king of France (the Gascons had burned part of La Rochelle). The doctrine held that English kings had ‘‘time out of mind . . . been in peaceable possession of the sovereign lordship of the English sea and the islands therein’’ (that is, the Channel). This was an effort to redefine a dangerous dispute with France as an internal English problem, and to elevate the English king to equal status with the king of France. On the water it was an idle boast: no one respected the English claim to jurisdiction, and England had no navy to enforce what, in Mahanian terms, today would be called ‘‘command of the sea.’’ The assertion’s most lasting effect was to sometimes embarrass the crown to pay compensation to foreign victims of English pirates. It was most often cited by foreign monarchs keen to embarrass their English counterpart, or by wily Flemish or Dutch merchants eager to recover goods lost to English piracy, or cynically by English pirates as an excuse to raid neutral shipping that ‘‘failed to honor’’ the claim. For two centuries English monarchs trotted out the claim to ‘‘sovereignty of the sea’’ but intermittently, only when it was enforceable or politic. Not even the staggering naval victory at Sluys (1340) permitted England to enforce this premature claim, which would have demanded a permanent navy to effect.
Posted by Mitch Williamson at 6:04 PM