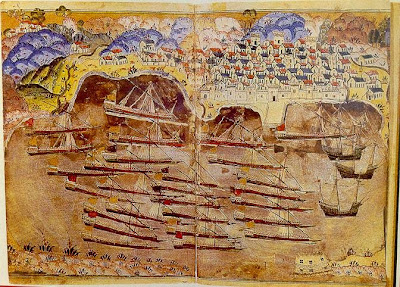 Ottoman fleet anchored at the French port of Toulon in 1543. Miniature by Matrakçı Nasuh who was travelling with the fleet. 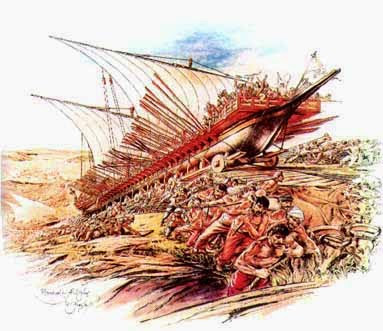 The Ottoman Turks transport their fleet overland into the Golden Horn.


In 1453 the Ottoman fleet participated in the historic conquests of Constantinople, Gökçeada, Lemnos and Thasos. The conquest of the Duchy of Athens in Morea was completed between 1458 and 1460, followed by the conquest of the Empire of Trebizond and the Genoese colony of Amasra in 1461, which brought an end to the final vestiges of the Byzantine Empire. In 1462 the Ottoman fleet conquered the Genoese islands of the northern Aegean Sea, including Lesbos. This was followed by the Ottoman-Venetian War of 1463-1479. In the following period the Ottoman fleet gained more territory in the Aegean Sea, and in 1475 set foot on Crimea on the northern shores of the Black Sea. Until 1499 this was followed by further expansion on the Black Sea coasts (such as the conquest of Georgia in 1479) and on the Balkan peninsula (such as the final reconquest of Albania in 1497, and the conquest of Montenegro in 1499). The loss of Venetian forts in Montenegro, near the strategic Castelnuovo, triggered the Ottoman-Venetian War of 1499-1503, during which the Turkish fleet of Kemal Reis defeated the Venetian forces at the Battle of Zonchio (1499) and the Battle of Modon (1500). By 1503 the Ottoman fleet raided the northeastern Adriatic coasts of Italy, and completely captured the Venetian lands on Morea, the Ionian Sea coast and the southeastern Adriatic Sea coast.

The restored Byzantine Empire was conquered by the Ottoman Empire in 1453 while the Empire of Trebizond managed to survive until 1461, when it too was conquered by the Ottoman Empire. Manuel III (1390–1417), the second son and successor of Alexios III, allied himself with Timur, and benefited from Timur's defeat of the Ottoman Turks at the Battle of Ankara in 1402. His son Alexios IV (1417–1429) married two of his daughters to Jihan Shah, khan of the Kara Koyunlu, and to Ali Beg, khan of the Ak Koyunlu, while his eldest daughter Maria became the third wife of the Byzantine Emperor John VIII Palaiologos. Pero Tafur, who visited the city in 1437, reported that Trebizond had fewer than 4,000 troops.

Alexios IV's eldest son, John IV (1429–1459), could not help but see that his Empire would soon share the same fate as Constantinople had suffered in 1453. The Ottoman Sultan Murad II first attempted to take the capital by sea in 1442, but high surf made the landings difficult and the attempt was repulsed. While Murad's son and successor, Mehmed II, was away laying siege to Belgrade in 1456, the Ottoman governor of Amasya attacked Trebizond, and although defeated, took many prisoners and extracted a heavy tribute.

John IV prepared for the eventual assault by forging alliances. He gave his daughter to the son of his brother-in-law, Uzun Hasan, khan of the Ak Koyunlu, in return for his promise to defend Trebizond. He also secured promises of help from the Turkish emirs of Sinope and Karamania, and from the king and princes of Georgia.

After John's death in 1459, his brother David came to power and misused these alliances. David intrigued with various European powers for help against the Ottomans, speaking of wild schemes that included the conquest of Jerusalem. Mehmed II eventually heard of these intrigues, and was further provoked to action by David's demand that Mehmed remit the tribute imposed on his brother.

Mehmed's response came in the summer of 1461. He led a sizeable army from Bursa, first to Sinope, whose emir quickly surrendered, then south across Armenia to neutralize Uzun Hasan. Having isolated Trebizond, Mehmed quickly swept down upon it before the inhabitants knew he was coming, and placed it under siege. The city held out for a month before David surrendered on August 15, 1461. With the fall of Trebizond, the last remnant of the Byzantine Empire, and thus also of the Roman Empire from which the Byzantine Empire sprang, was extinguished.
Posted by Mitch Williamson at 5:58 PM