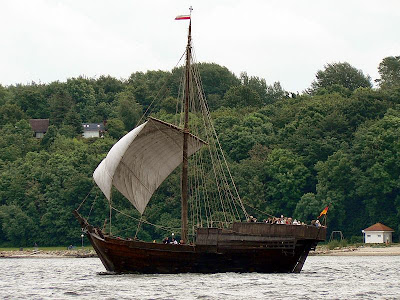 Balinger
During the 14th–16th centuries, a class of clinker-built, oared ship, with a single mast and sail. Originating in the Basque whaling industry, its design migrated to England where balingers were used in war and trade, displacing English galleys from local waters during the 14th century.

Birlin
A small oared warship used for raids and amphibious assaults in the isolated West Highlands and outer islands of Scotland. They were still in use into the 17th century.

Cocha
In the 14th–15th centuries, a mid-sized ship representing a redesign of the cog. It could be fitted for trade, war, or both (as an armed merchantman). It was first laid in the Mediterranean, where the skeleton-built system of the south blended with the clinker-built designs of the north to produce this hybrid. In northern waters it was called a carrack.

Cromster
A Dutch merchant ship developed as a coastal warship by the Sea Beggars. A shallow-draughted, wide-beamed cargo vessel, it was designed to carry trade in the shallow waters of the Netherlands coast and river estuaries. In wartime its sturdy hull accepted a heavy brace of guns. Cromsters also were popular with English allies of the Dutch.

drekkar/drekki
‘‘Dragon ship(s).’’ A generic term for any very large warship, but notably a longship. 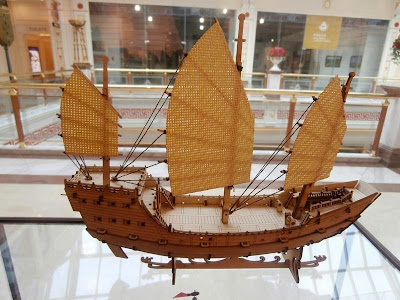 Fujian ships
Large, two-masted Chinese junks capable of blue water voyages. They carried a crew of about 100. While they sported numerous swivel guns, muskets, bows, fire lances, and other anti-personnel weapons, their weak planking could neither support nor withstand large-caliber broadside artillery.

Fusta
An oared warship smaller than a galliot and much smaller than a war galley. It had just 15 banks of oars in bireme formation, and 60 crew at two men per oar. Fustas carried 40 infantry sharpshooters and boarders.

Guangdong
A large Chinese junk, built tougher and stronger than the Fujian class and used for coastal and oceanic trade. They were well-armed with a variety of anti-personnel weapons, but given their weak hull design they could not support heavy, ship-killer broadside artillery. Some had long oars (‘‘sweeps’’).

Lymphad
A small oared warship descended from the Viking longship and in use for over 1,000 years, into the 17th century. Their main role was in lightning coastal raids and amphibious assaults in the isolated West Highlands and outer islands of Scotland. 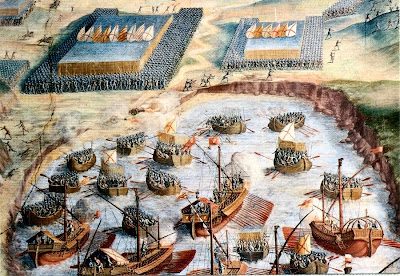 Spanish ships landing in the Battle of Ponta Delgada (Battle of Terceira Island) naval battle of 26 July 1582, between a Spanish fleet of 26 ships which included several pataches (tenders), commanded by Don Álvaro de Bazán, and a French fleet of 60, led by Admiral Philippe Strozzi, ending with a decisive victory for the Spanish

Patache
A small Spanish reconnaissance ship. They were an integral part of most treasure fleets. The type was closely related to the zabra.

Resfuerzo
A Spanish supply ship. They were used between colonies as well as between Spain and its overseas holdings. They also accompanied the great armadas and treasure fleets.

Shallop
Originally, a small sloop-like warship, predominantly a cruiser in shallow coastal water. In the 16th–17th centuries this term was used more often about a small class of ship’s boat.

Tarides.
A flat-bottomed, long-distance oared transport used to carry from 25 to 40 cavalry mounts. Their great advantage over round-bottomed sailing ships, which could carry 100 or more horses, was that they were amphibian: their horse cargo could be unloaded directly onto a beach where a round-bottomed ship needed a secure harbor.

Zabra.
A small (80–100 tons) two- or three-masted Spanish warship. The type was closely related to the patache. Most sported lateen sails and were fast ships. They were used in reconnaissance and for carrying messages or supplies between slower hulks and larger warships. The Spanish deployed a full squadron of zabras and pataches as part of the Invincible Armada.
Posted by Mitch Williamson at 6:18 PM