Incredible discovery of boat wreck in Croatia dated to 3,200 years 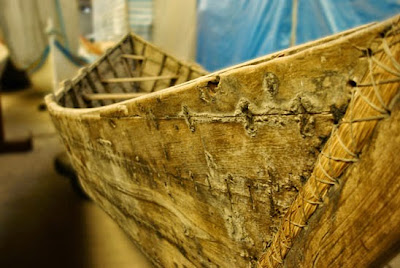 An example of a sewn boat. Photo credit: World of Boats.

Marine archaeologist and researcher at the Centre National de la Recherche Scientifique (CNRS) in France, Giulia Boetto, has announced the incredible discovery of a boat wreck in Zambratija Cove, Croatia, which has just been dated to 1,200 BC.  The unique and rare finding is a Bronze Age sewn boat, a type of wooden boat which is literally sewn together using ropes, roots, or willow branches.
The boat wreck was first seen by fishermen in 2008, just 600 metres from the beach and only two metres below the surface, however, they believed it to be a fairly recent wreck.  Giulia Boetto, and two of her Croatian colleagues, Ida Koncani from the Archaeological Museum of Istria, and her husband Marko Uhac from the Ministry of Culture, investigated the site and believed the boat to be quite old.  Initial dating led to the surprise discovery that the boat was from pre-Roman times.
The research team returned to the site in 2011 to take further samples and to conduct more rigorous analyses.  Finally, results of radiocarbon dating have revealed that the boat dates to a much earlier period – the 12th century BC.  Ms Boetto described the finding as “an extraordinary discovery [translated]”. She added, “It is extremely rare to find a wreck dating from the Bronze Age [translated]”

Posted by Mitch Williamson at 9:32 PM