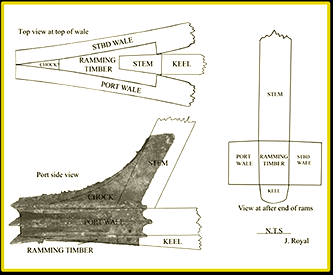 The Ancient Warship Archaeology Program (AWAP) was initiated after the discovery of numerous warship rams in the Egadi Islands, Sicily. Together with previous ram discoveries, this increase in the corpus of rams provides a signficant body of evidence for warships studies from an archaeological perspective. Having relied almost solely on literary, iconographic and indirect architectural evidence to date, it is now possible to bring archaeological evidence, direct evidence, to this study. Research objectives include warship construction, ram construction and function, warship tactics, warship deposition.

Is a bronze warship ram a weapon? The definition of weapon is really quite broad being anything used to cause harm, injury, or damage. Such a definition can include almost anything including a roof tile that killed an invading King Pyrrhus in Greece. More instructive for this discussion is to limit ‘weapons’ to those objects that were purposefully manufactured for use in warfare, and are a composite of several materials. In antiquity weapons can be broken into two main categories: ranged and melee. Ranged weapons are designed to shoot a projectile and inflict harm at a distance from the wielder of the weapon. These type weapons included javelins, bows, catapults, and slings. Melee weapons were used in a manner that the wielder maintained contact with the weapon as it inflicted harm. The most common weapons of this type were swords, spears, axes, daggers, clubs, maces, and hammers. A warship’s ram was part of a larger weapon, the warship, which falls within the broad category of melee weapons. The warship was powered and wielded by individuals who were required to stay with it and directly operate the vessel for it to function. Warships were not propelled forward to travel unmanned with intention to strike another warship, a case where they would be ranged weapons, rather the crew and officers directly propelled and steered them into their intended targets.

In addition to being a component of a weapon, the warship, a bronze ram also served in the capacity of armor. Armor is a covering of material that is designed to offset the penetration or impact force of projectile or melee weapons. Clear examples are the body armor worn by soldiers in antiquity that protected the soldiers’ skin, and in some cases helped to protect the bones. One of the key personal armor elements was the helmet that was typically constructed of bronze or iron and had an intervening padded section with the wearer’s head; this system helped to protect the skull from being easily penetrated or shattered. Not unlike the helmet, or the hilt guard on a sword, the ram had a protection role. As noted, a bronze ram on the bow of a warship helped to project the timbers that most often came into direct contact when delivering the weapon’s blow. Without a protective function as consideration, there is little need for the cowl and bottom plate/tailpiece. The important structural keel and stem timbers required protection as did the intricate scarfs at the bow; damage here could easily render the entire warship unserviceable.
Posted by Mitch Williamson at 9:27 PM