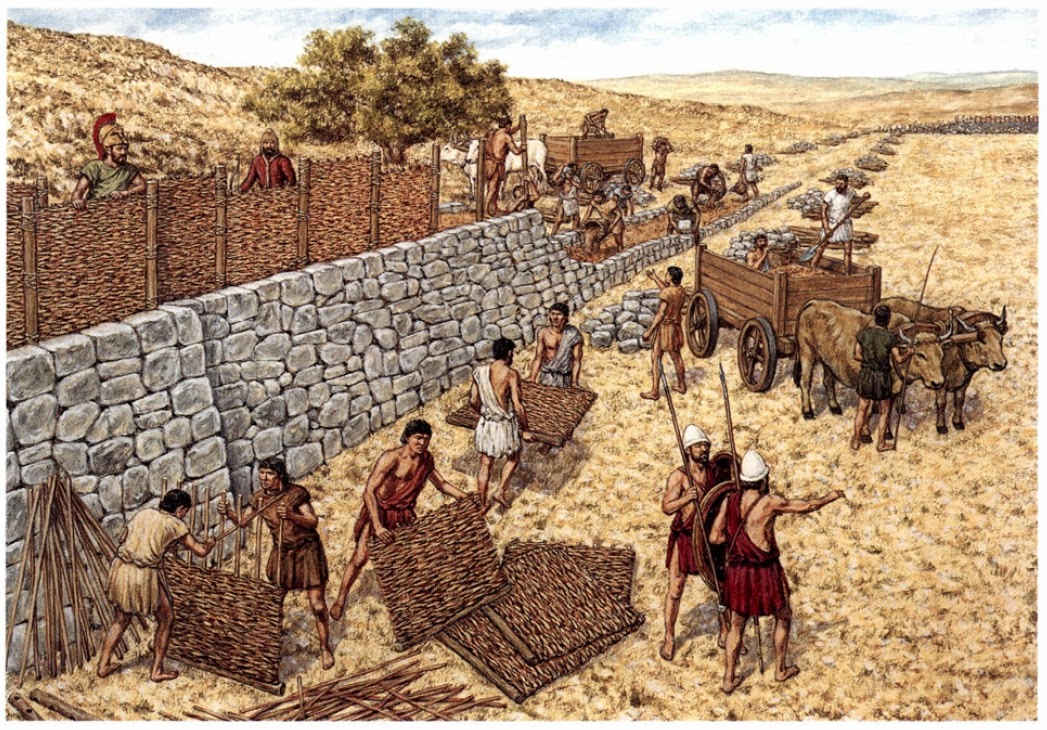 The Athenian siege of Syracuse, 415-413 BC. The scene is from 414 BC, when the Athenians bad established a fort at Syca ('the fig tree ') on the Epipolae plateau above Syracuse, and embarked upon their usual strategy of periteichismos [encirclement]. Specialist masons and carpenters appear to have accompanied the army to Sicily, and tools for construction work were a normal part of their equipment.

In the spring of 414 the Athenians renewed offensive operations at Syracuse. Despite Syracuse's work during the winter, the Athenians captured the fortifications at Euryalus close to Syracuse and drove the Syracusans behind their city's walls. The Athenians then constructed a fortification, known as the Circle, along with other protective walls. They also destroyed several Syracusan counterwalls. Unfortunately for the Athenians, Lamachus was killed in the fighting, and leadership devolved on the ineffective Nicias.

Syracuse was now in despair, with the city on the brink of defeat. At this point a Corinthian ship made its way into the harbor with news that help was coming. Fortified by this development, the leaders of Syracuse vowed to fight on. Gylippus's expeditionary force then landed in northern Sicily and marched to Syracuse; Nicias failed to challenge it en route. Gylippus's men strengthened the defenses of Syracuse and, in the spring of 413, won a stunning victory over the Athenian Navy, capturing its base.

Rather than lose prestige by abandoning the siege, the Athenians decided to send out a second expedition. Led by Demosthenes, one of Athens's most distinguished generals, it consisted of 73 triremes carrying 5,000 hoplites and 3,000 bowmen, slingers, and javelin throwers-in all some 15,000 men-and arrived at Syracuse in July 413.

Demosthenes attempted to destroy one of the Syracusan counterwalls; when this proved unsuccessful, he mounted a night attack. It caught the defenders by surprise, and the Athenians took Euryalus and much of the Epipolaen plateau. Enough of Gylippus's troops held fast, and the Syracusans mounted an immediate counterattack that caught the Athenians disorganized and inflicted heavy casualties. Cut off from supplies and prey to enemy cavalry, the Athenians attempted a breakout from the harbor of Syracuse in September 413 with 110 ships-both fit and unfit for action-but were contained by a great boom of block ships across the mouth of the Great Harbor as well as some 76 Corinthian and Syracuse ships. The naval battle ended in Athenian defeat, with Athens losing 50 ships to its enemy's 26.

The Athenians still had 60 triremes to their enemy's 50, and the generals wanted to try another breakout. The crews refused and demanded an overland retreat. Instead of setting out at once in the midst of Syracusan victory celebrations, the Athenians paused for 36 hours because of a false report (which had been spread to gain time until the victory celebrations had ended) that the retreat route was blocked.

Once the retreat was under way, 6,000 Athenian men under Demosthenes were offered freedom if they would desert. They refused and fought on until the situation was hopeless. On receiving a guarantee that his men's lives would be spared, however, the Athenian commander surrendered. Another group of 1,000 men was also forced to surrender. Nicias and Demosthenes were butchered, against the will of Gylippus. These 7,000 men-out of 45,000-50,000 who had taken part in the expedition on the Athenian side-were sent off to the stone quarries of Syracuse. The expedition also cost Athens some 200 triremes. Thucydides concluded, "This was the greatest Hellenic achievement of any in this war, or, in my opinion in, Hellenic history; at once most glorious to the victors, and most calamitous to the conquered" (Finley, The Greek Historians, 379).

The annihilation of the Athenian fleet and army in Sicily shook the Athenian Empire to its core. The islands of Euboea, Lesbos, and Chios now revolted against Athens. Sparta built 100 warships, and Persia set out to regain its lost Ionian dominions.

Athens might have had peace in 410, but its people were buoyed by a naval victory that year and rejected Spartan overtures. In 405 an Athenian fleet of 170 ships was taken while beached in the "Battle" of Aegospotami at the Hellespont while taking on supplies. Lysander, the Spartan naval commander, then captured the remaining Athenian garrisons at the Hellespont and severed Athenian access to Ukrainian wheat supplies. The Spartans permitted their Athenian prisoners to return to Athens in order to increase the strain on its scant food stocks. Pausanias, the second Spartan king, then brought a large land force to Athens and laid siege to the city by land, while Lysander arrived with 150 ships and blockaded it by sea. Starved into submission, Athens surrendered in 404. Corinth and Thebes urged that the city should be utterly destroyed and its people sold into slavery. To their credit the Spartans rejected these proposals, insisting that the city's Long Walls and fortifications all be demolished. Athens also had to give up all its foreign possessions and its fleet, and the city was forced to enter into alliance with Sparta and accept its leadership. The Peloponnesian Wars were over, and so too was the period of Athenian supremacy.