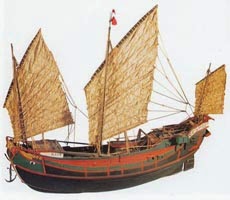 During the past 5,000 years the expansion of the Austronesians from Taiwan into Southeast Asia, and from there into the Pacific and to Madagascar, has always been carried out, out of necessity, across the seas and upstream along the rivers of the major islands. At the turn of the first millennium C.E., local and regional maritime exchange networks had expanded into long-distance overseas commerce that brought local ships and traders to harbors of the South China Sea and the Indian Ocean. Linguistic, ethnographic, archaeological, and historical research has all contributed to a considerable body of knowledge on Austronesian shipbuilding traditions. Other peoples of Southeast Asia, particularly the Mon, appear in time to have developed their own shipbuilding industries. However, for lack of proper studies, it is not clear how much of it was indigenous, or how much they owed to borrowings during interaction with the neighboring Austronesians (Austronesian nautical terms appear in Old Mon inscriptions).

The typical Austronesian vessel appears to have been developed from a dugout canoe. As its size grew, side-planks were added to the dugout hull, which progressively turned into a keel. In the early stages of seafaring, as in historical and modern smaller and narrower boats, outriggers were necessary stabilizing devices. As these smaller vessels grew into bulkier, high seas trading ships with rounded hulls, however, it appears that outriggers were not used: the earliest descriptions of Austronesian ships, in third- to eighth-century Chinese texts, do not mention stabilizing devices. What they do describe are very large ships, carrying hundreds of tons of cargo and passengers, propelled by multiple sails rigged on several masts. According to these early witnesses, no iron was ever used in fastening the planks of these ships, only strings made of vegetal fibers. Archaeological work carried out in Peninsular Malaysia, Sumatra, and the Philippines has indeed brought to light an indigenous tradition of shipbuilding that fully confirms these early texts. Sites from the third to the twelfth centuries C.E. have yielded remains of hulls made of planks fastened together by wooden dowels and stitches of palm-sugar fiber strings. Some of these shipwrecks were as much as 30 meters in length. These sites also yielded some side rudders, a feature described in later ships that survived in twentieth century Javanese and Bugis traders. Their sails and masts were reconstructed from iconography, as depicted on a few early seals and on the famous eighth-century relief of the Borobudur temple: they carried multiple tripod masts and canted square sails made of matting. This early stitched technique partly survived in seventeenth- century Philippines and Moluccan boats and in modern whaling boats of Lomblen.

By the fifteenth and sixteenth centuries, much of the local large-scale trade was carried out in ships known in Malay or Javanese as jong, a local term that gave birth to the word “junk” in European languages (later to be used only for Chinese ships). Their hulls were still being assembled without any iron fastenings: wooden dowels had by then completely replaced the earlier fiber lashings to keep the planks fastened together, and the shell was in turn dowelled to the sturdy frames. These were huge sailing vessels, even by European standards of the times: Malay and Javanese jong that hauled 500 tons of merchandise and a few hundred people were regularly described in Portuguese sources. Like earlier vessels, they were steered with a pair of side rudders and carried multiple masts, and as many lug sails of fiber matting, including a typical bowsprit sail.

The fleets of large indigenous jong were to disappear in the second half of the sixteenth century because of a combination of economic and political factors that laid considerable strain on the capacities of local powers to maintain their own trading fleets. As a result of increased warfare at sea, much of the local capital and energy was then spent on building and maintaining profusely armed war fleets of long craft. The largest were new ships for the region, galley-type craft built according to Mediterranean standards learned from Portuguese renegades and Turkish shipwrights, built in such a way as to allow them to carry and shoot the large cannon necessary for battles at sea.

Shipwreck archaeology has also proved that, by the fifteenth century, indigenous Malay and Javanese jong were no longer the only large trading ships built locally. Southern Chinese vessels had conquered their own share of the local shipping. However, the ban on shipbuilding and overseas shipping imposed by the Ming dynasty (1368–1644) appears to have prompted many Chinese to settle in Southeast Asia and to build their ships locally. This contributed to the birth of the so-called South China Sea shipbuilding tradition, a blend of two nautical traditions, Austronesian and southern Chinese.

In Indonesian seas, a significant fleet of lesser coasters (under 100 tons) survived the disappearance of the large oceangoing jong. The building of these vessels kept the local shipbuilding traditions alive until modern times. Together with the fishing boats, these fleets of small to medium-size Madurese, Butonese, and Bugis ships were the last to bear witness to the earlier grandeur of Malay world shippers.