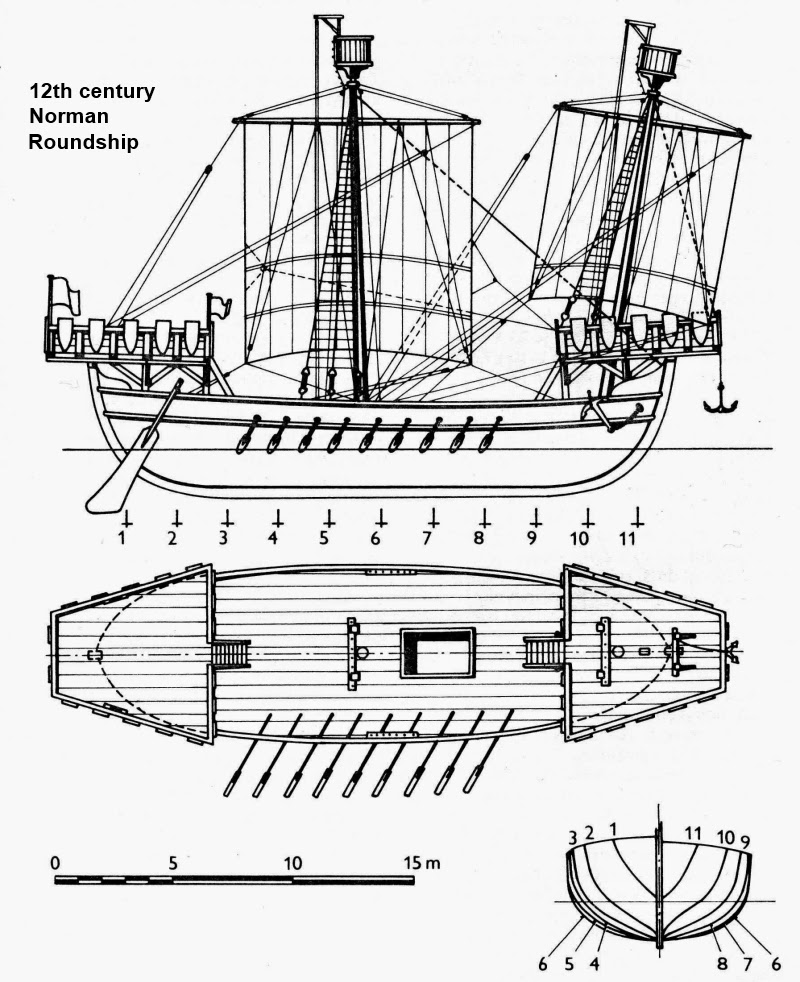 The round ships of the Mediterranean came from Roman ships with a 3:1 ratio of width to length. They were constructed with caravel-built hulls and no oars, but instead 1-3 masts often with lateen sails. They were used for transport and trade, and were know in the later 12th and 13th centuries to add castles, for and aft, to the ship, which later became part of the hull design. These were more decorative and helped hold more cargo and passengers; the aft castle often held the captain's quarters.

#
Medieval ship type popular in the eleventh through the thirteenth centuries and the Christian Crusaders’ transport of choice. Unlike the swift, more comfortable galleys that transported the wealthiest crusaders and pilgrims to the Holy Land, the round ship was ungainly and slow. Because of the need for large amounts of cargo space for retainers, equipment, and horses, it was, however, ideal.

Round ships had a length-to-beam ratio of three or even two to one, giving them a round appearance and their name. Most were single-masted and square-rigged vessels. The cog of northern Europe was a typical round ship.

Slow because of their hull shape, round ships had to await favorable winds before sailing from each port of call. However, the increase in carrying capacity made a slower passage economically feasible. In traveling to and from the Holy Land, round ships moved along the coasts, rarely venturing offshore. In their inevitable stops along the way, these ships opened up markets for the Italian merchants whose goods they carried. Over time these markets became regular trading ports for the maritime republics. The round ship began to disappear in the fifteenth century, replaced by the carrack and other ship designs.
Posted by Mitch Williamson at 5:03 AM