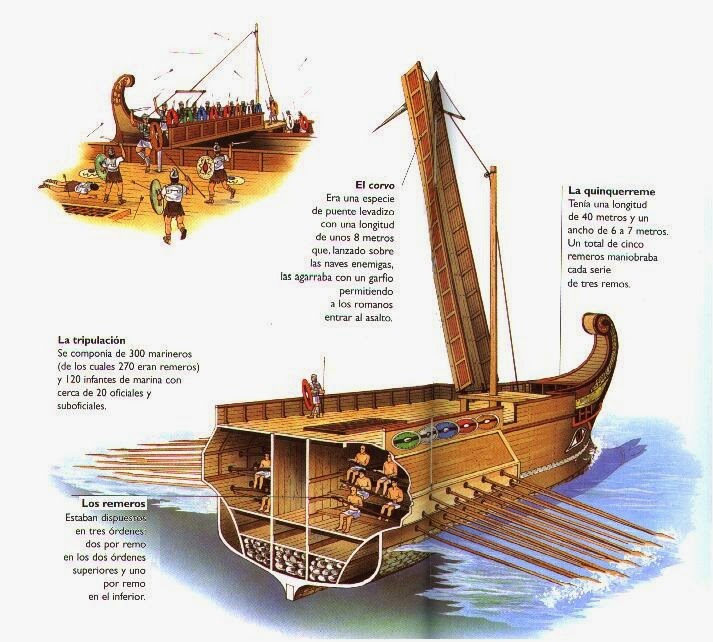 To compensate for their lack of nautical expertise, however, the Romans introduced a technical innovation that exploited their legionaries' aptitude for close-quarter fighting. A 12-foot pillar of wood with a pulley on the top was fitted to the prow of every vessel. To this pillar a boarding bridge was attached which could be hoisted up and swung around in the required direction. At the end of the bridge there was a large pointed spike called a COITUS which, when released, drove itself into the deck of the opposing vessel, locking the two ships together. Then the legionaries could storm aboard and slaughter the near-defenceless crews. As an example of a technical innovation which led to a precipitous reversal of battlefield superiority that had endured for centuries, the corvus outclassed all subsequent developments such as gunpowder, the tank, radar, submarines, air power and electronic warfare.

Like the Rhodians, the Carthaginians had a long tradition of naval warfare, and their experience in this area meant that in the First Punic War their main tactic was ramming, whereas the Romans preferred to grapple and board.152 Early in the First Punic War, the Romans introduced a new form of boarding involving the use of a special piece of equipment, a boarding-bridge called the ‘crow’(Latin corvus). The circumstances of this development are sketchy. The Romans had built a fleet in the latter part of 260, based on a captured Carthaginian vessel. The first proper voyage for this new fleet took it the along western coast of Italy towards the Straits of Messina. An advance force of seventeen ships, under the command of Gnaeus Cornelius Scipio, one of the consuls of 260/59, headed directly to Messana. Its aim was to arrange for supplies and other facilities for the main fleet (Polyb. 1.21.4). Scipio was diverted to the Lipari Islands, possibly by the promise that they would be betrayed to him, but he was captured by Boodes, a Carthaginian commander who sailed out with a large naval force from Panormus and caught Scipio off guard. He abandoned his small squadron of ships and surrendered, earning the nick-name ‘Asina’ (she-ass). It is most likely that the new Roman ships did not have the corvus fitted to them, otherwise the Carthaginians would have been better prepared for it in the battle at Mylae, which occurred soon afterwards. Similarly, when the Carthaginian admiral Hannibal went out to reconnoitre the approaching Roman fleet with fifty ships and lost most of them, having come upon the Romans unexpectedly, it was a straightforward naval encounter, again not featuring the corvus (Polyb. 1.21.9–11).

It was apparently after these two episodes that the Romans introduced the corvus, probably as a result of appraising their tactical performance in the recent clash with the fifty Carthaginian ships under Hannibal. It would certainly seem logical for them to have introduced such a tactical innovation in order to counter a perceived weakness in their combat methods. For a description of the corvus we are reliant upon Polybius (1.22). The key details are as follows. It consisted of a pole 7.3 m (24 feet) high and 22–5 cm (9–10 inches) thick, with a pulley on top, from which was suspended the boarding bridge itself. This was 11 m (36 feet) long and 1.2 m (4 feet) wide. It had a spike on the underside at the far end to fix it into the deck of an enemy ship. A slot 3.65 m (12 feet) from the lowest end enabled it to slide up the pole (probably less than all the way to the top) and to be swung around. Rings were used to attach ropes to the far end so that it could be raised and lowered via the pulley. Polybius says it was mounted on the prows of the Roman warships, but it must have been set some way back from the very end of the prow, as it seems to have been swivelled around to grapple with ships on either side of the Roman vessel. The device was designed for a dual function: it held enemy ships fast and provided a relatively easy means for the Roman marines to board them. It also offered an alternative naval combat tactic to ramming.

Polybius implies that the corvi were a late addition to the Roman ships, a last-minute modification in anticipation of imminent naval combat. It is not unlikely, therefore, that the Romans made as much use as possible of existing fixtures and fittings. They may even have incorporated the footings or tabernacle used for masts. The fact that they are described as being on the prows of the Roman ships and swivelled around to grapple ships approaching from the sides could indicate that they were positioned where the foremast would have been.
The invention of the corvus could be characterized as a typical Roman response to a military problem by engineering a technological solution. Alternatively, it could just be seen as a desperate gamble aimed at turning sea-battles into land-battles and relying on the training and determination of the Roman legionaries turned marines to succeed in close-quarter fighting. However it is viewed, this bold tactical innovation certainly worked. The ensuing battle of Mylae in 260 was the first major naval battle of the First PunicWar (Polyb. 1.23; Diod. Sic. 33.10). About 100 Roman ships defeated about 130 Carthaginians. The Carthaginians were puzzled by their first sight of the corvi, but attacked the Roman fleet with determination. They lost their thirty lead ships immediately, all having been grappled by corvi and boarded. This included the admiral Hannibal’s flagship, a ‘seven’, but he escaped in a skiff. The remaining Carthaginian ships tried to use their superior speed and manoeuvrability to get at the Romans from better angles to avoid the corvi, but the swivel mechanism allowed the Romans to grapple some of these as well. The Carthaginians retreated after losing about fifty ships, and the victorious Roman commander, the consul Gaius Duilius, was honoured with a column in the forum, decorated with the prows of the captured ships. 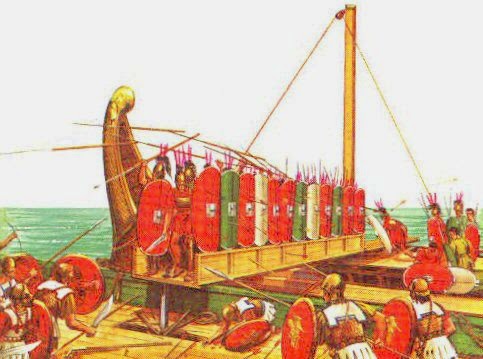 Four years later, another major sea-battle at Ecnomus also ended in defeat for the Carthaginians. This battle was a deliberate attempt by one large naval expeditionary force to intercept and destroy another. It produced a sprawling, multi-part confrontation which happened within sight of the land, and may have been partly influenced by the proximity of the shoreline, but it was essentially a battle at sea between two fleets of warships heavily laden with marines. The Romans won because their various squadrons were able to defeat and drive off the Carthaginian squadrons in direct confrontations and then come to the aid of their fellows. Polybius insists that Carthaginian ships were faster (1.26.10, 1.27.10), but that does not seem to have made a great deal of difference. Most of the Roman captains were able to avoid being rammed in their vulnerable stern quarters and either grapple with the enemy or keep them at bay. For all their speed, the Carthaginians seem to have been too intimidated by the corvi to engage the Romans properly on the open sea.
Posted by Mitch Williamson at 5:18 AM