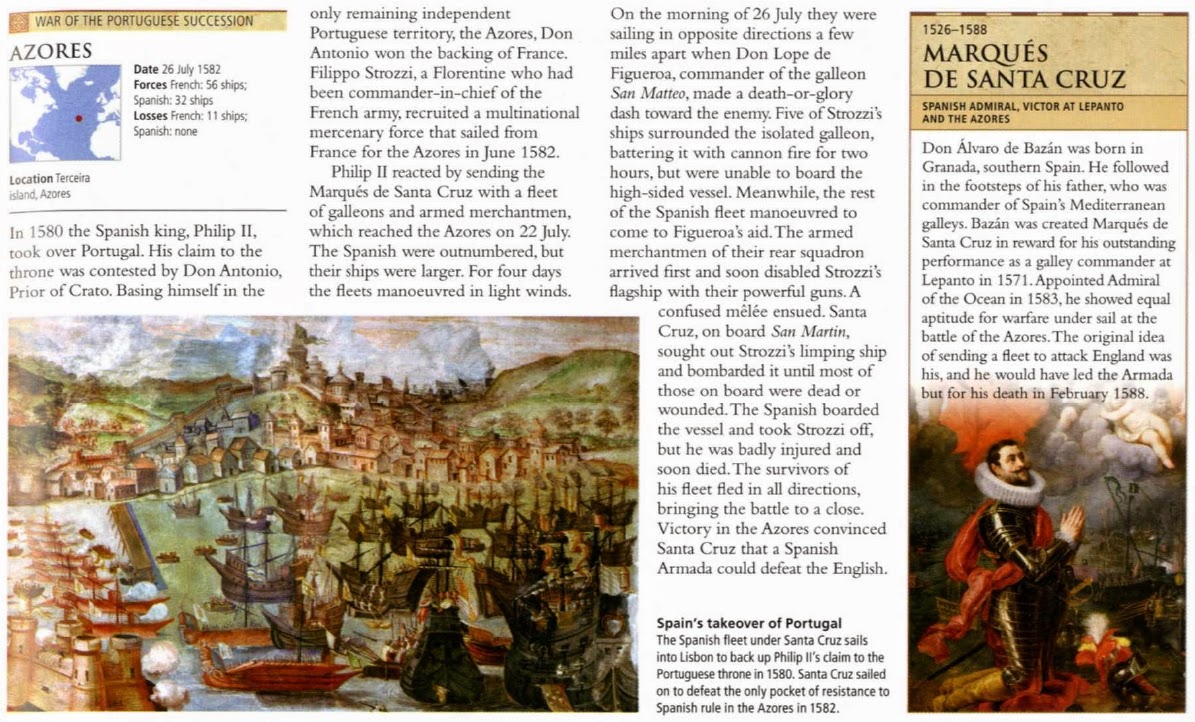 Naval battles between Spain and France, the first in the Central Atlantic. Although the death of King Sebastian of Portugal in 1578 had made Philip II of Spain the clear heir to the Portuguese throne, eight of Portugal’s nine strategic Azores islands opted to recognize as king Sebastian’s illegitimate son, Dom Antonio de Crato. Forced into exile as the Spanish occupied Portugal, Antonio nonetheless managed to secure aid for his cause from England and France, which were keen to disrupt the powerful Hispano-Portuguese union and saw the Azores as a prime base for attacks on Spanish treasure fleets returning from America. French regent Catherine de’ Medici also had laid claim to the Portuguese throne and had been promised Brazil by Dom Antonio in return for aid. She sent a fleet of 63 ships and some 5,800 troops under the command of her cousin, former army general Filippo Strozzi, to seize the only Azorean island loyal to Spain, São Miguel, and to protect the other islands from a large Spanish fleet that had sailed from Cádiz.

This fleet consisted of 28 ships under Spain’s greatest sailor, Álvaro de Bazán, Marqués de Santa Cruz, with some 6,700 veteran soldiers aboard. Strozzi arrived in the islands six days before Santa Cruz and, despite a successful amphibious landing on São Miguel, failed to carry the crucial fort of Ponta Delgada. The French were in the process of re-embarking their infantry when the Spanish fleet appeared. The ensuing battle on 26 June 1582 lasted some five hours, with the French trying to stand off and cannonade, and the Spaniards seeking to grapple and board.

The French tactic failed for lack of a sufficient number of heavy guns and the early departure of 30 ships. Santa Cruz’s fleet sank six French ships. Some 2,000 French soldiers and sailors died, including their commander, Filippo Strozzi; another 390 were taken prisoner. The Spaniards lost 224 dead and 533 wounded. Five days later, Santa Cruz had all the prisoners executed, a much-decried act he tried to justify by claiming that the victims were lawless pirates.

But Santa Cruz sailed back to Spain without forcing the surrender of the main rebel island of Terceira, and a second French expedition to safeguard the island was mounted in May 1583 under the command of Aymar de Chastes, governor of Dieppe. Eager to crush the Azores rebellion once and for all, Philip II ordered Santa Cruz to return to the islands in 1583 with an even larger armada of 98 ships carrying over 15,000 men. After defeating the French fleet, the marquis, in one of the early modern world’s classic amphibious landings, overwhelmed the rebel stronghold and put most of its French, English, and Portuguese garrison to the sword.

Santa Cruz’s victory was hugely acclaimed in Spain, since it sealed the union of two great world empires. He himself saw the Azores victory as the prologue to an invasion of England, which he thought might take place as early as 1584. He seems to have believed that the fleets he had so easily defeated were partly English and thus reckoned that defeating England would be less difficult than heretofore believed. Chosen to lead Spain’s Enterprise of England, Santa Cruz died before it set sail. The battles off the Azores also underlined for the powers concerned the necessity of maintaining fleets that could operate efficiently in the Atlantic, which meant accelerating construction of galleons.