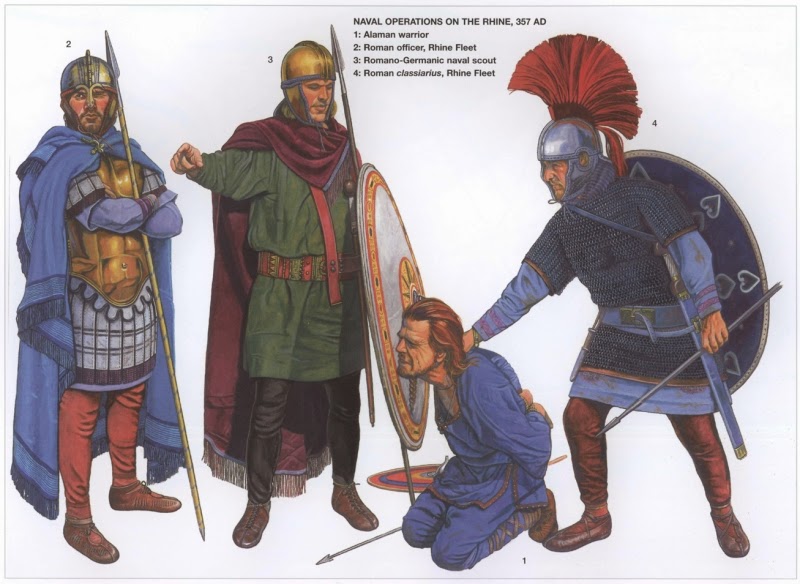 When assessing the overall effectiveness of Roman frontier defense, therefore, it is necessary to factor into the equation that substantial economic losses to outside raiding were also part of the picture, since it took a fair amount of raiding to trigger a response. How substantial that raiding might have been has emerged from an exciting archaeological find made while dredging in the Rhine near the old Roman frontier town of Speyer. Late in the third century, some Alamannic raiders had been trying to get their booty back home across the Rhine when their boats were ambushed and sunk by Roman river patrol ships. This booty consisted of an extraordinary 700 kg of goods packed into three or four carts, the entire looted contents of probably a single Roman villa, and the raiders were interested in every piece of metalwork they could find. The only items missing from the hoard were rich solid silver ware and high-value personal jewelry. Either the lord or lady of the house got away before the attack or else the very high-value loot was transported separately. In the carts, however, was a vast mound of silverplate from the dining room, the equipment from an entire kitchen (fifty-one cauldrons, twenty-five bowls and basins, and twenty iron ladles), enough agricultural implements to run a substantial farm, votive objects from the villa’s shrine, and thirty-nine good-quality silver coins. If this haul represents the proceeds of just one localized raid, the magnitude of the more sustained disturbances required to trigger an imperial campaign should not be underestimated. Nonetheless, the overall pattern of the evidence is unmistakable. Late Roman emperors did not leave their troops passively behind the frontier merely waiting for trouble. Periodically, the field armies were trundled out in force to establish an overwhelming level of immediate military dominance, which was then used to dictate an overall diplomatic settlement for the region that was in line with the empire’s priorities, to maximize the cost-value ratio of the original campaign.
Posted by Mitch Williamson at 5:21 AM