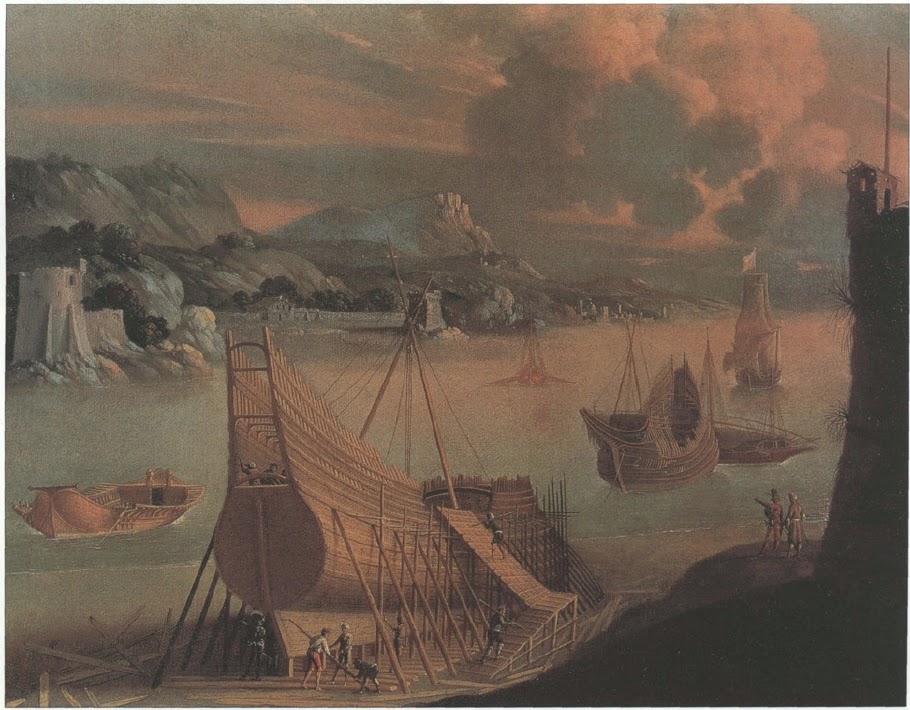 A painting by Agostino Tassi or Buonamico (1565-1644) shows a ship under construction at the leading Tuscan port of Livomo. The painting illustrates the large quantities of wood required for shipbuilding, and the immensity of the task posed by the construction of large warships using largely unmechanized processes. The capital investment required was formidable, but ships generally had a life of only twenty to thirty years.

Naval warfare entailed a commitment of resources which was often greater than that required for warfare on land. The failure of Philip II's huge and costly attempt to mount an invasion of England in the summer of 1588, and of subsequent expeditions, both Spanish and English, demonstrate the limits of sixteenth-century seapower.

THE LOGISTICS OF NAVAL WARFARE
The wooden warship equipped with cannon, whether driven by sails, muscle-power, or both, was the single most costly, powerful, and technologically advanced weapons system of the entire early modem period. The construction, equipment, manning, supply, and maintenance of a fleet required considerable financial and logistical efforts. Warships and equipment were durable, a heavy capital investment requiring maintenance; they therefore demanded not only technologically advanced yards for their construction, but also permanent institutions to manage them.

Warships provided effective mobile artillery platforms, and an individual vessel might carry the heavy firepower capacity comparable to that of an entire army. The trading wealth unlocked by the 'Age of Discoveries' encouraged the development of naval power to both protect and attack long-distance trade routes. Warships were also the most effective means of attacking distant hostile bases. In European waters, the strategic commitments of many powers involved maritime links, as for example between Spain and both Italy and the Low Countries, or Sweden and the eastern Baltic.

The sixteenth century saw the establishment and growth of state navies and the greatly increased use of heavy guns in sailing warships: heavy guns were carried in the Baltic from the early 1510s, and by English and French warships in the same period. Carvel building (the edge-joining of hull planks over frames) began to replace clinker (overlapped planks) construction in about 1500, contributing significantly to the development of hulls which were stronger and better able to carry heavy guns. Also, their sizes grew: there were warships of up to 2,000 tons (2,032 tonnes) displacement from early in the century. The English Henry Grace d Dieu (also known as Great Harry) had a 15 14 specification of 186 guns and 1,500 tons (1,524 tonnes) deadweight. The French, Scottish, Maltese, Danish, Swedish, Spanish, Lubeck, and Portuguese navies all included ships of comparable size during the course of the century.

Medieval naval warfare had been dominated by boarding, and this continued to play a role. The rising importance of firepower, however, led to a shift towards standoff tactics in which ships did not come into direct contact and boarding became impossible. The Portuguese were the first systematically to exploit heavy guns to fight standoff actions against superior enemies, a development often incorrectly claimed for the English at the time of the Armada. In northern Europe, the shift towards stand-off tactics can be seen by contrasting the Anglo-French war of 1512-14, in which the fleets fought in the Channel in the traditional fashion, with the gunnery duel in which they engaged off Portsmouth in 1545. This shift had important implications for naval battle tactics - though truly effective ways of deploying naval firepower were not found until the next century - and it further encouraged the development of warships primarily as artillery platforms. Forged-iron guns were dangerously unreliable, while the manufacture of large cast-iron weapons was beyond the technological scope of the period, but from mid-century firepower was increased by the development of large guns cast instead from lighter, more durable, and workable 'brass' (actually bronze). Simultaneously, improvements in gunpowder increased their range.
Posted by Mitch Williamson at 11:09 AM