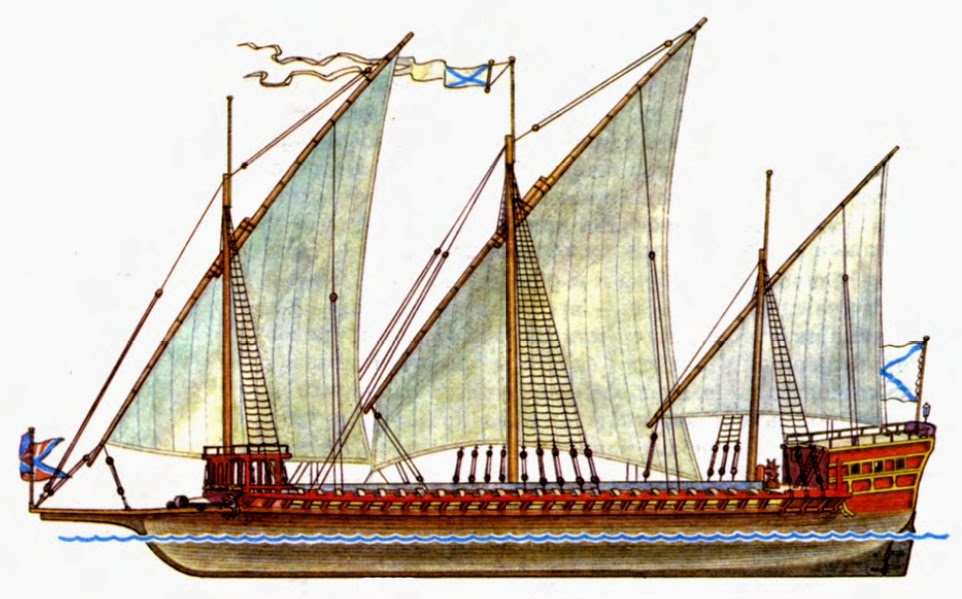 The history of medieval naval warfare is the history of the galley. Since ancient times, battles at sea have taken place largely on the decks of ships and were fought much like land battles, with hand-to-hand combat. Medieval naval battles usually followed a similar pattern. First, smaller, more maneuverable ships would pin down the enemy fleet. Then the larger, more heavily armed galleys would attack, initially firing missiles and then ramming or grappling the enemy vessel in order to board it. Blasts of lime were often fired to blind the enemy and were then followed by volleys of stones. One of the most dreaded tactics was to fling onto the enemy ship what was known as Greek fire, a substance that, once ignited, was inextinguishable in water. Crossbows, lances, bows and arrows, and, by the late Middle Ages, guns and cannons served as well at sea as on land. However, the ship itself was the most powerful weapon, often determining the outcome of a naval battle. The warship at sea was likened to the warhorse on land and, like the warhorse, the warship was bred for fighting.

Equipped with sails for distance and oars for maneuverability, the medieval galley was ideally suited for the purpose of war. Medieval variations on the classical galley were many. The dromon, developed by the Byzantines, was a large galley that utilized one or two tiers of oars, a square sail set on a single mast, and a stern-hung rudder. In times of war, the dromon could carry troops, weapons, supplies, and cavalry horses, as well as engage in sea battles when necessary. The beam of the dromon permitted mounted cannons in the bow of the ship, which could be fired directly ahead of the vessel. A variation on the dromon was the Italian galley, which had one level of oars with two or three oarsmen to each rowing bench, a total of approximately 120 oarsmen. The Italian galley was manned by about fifty soldiers and typically had a large catapult mounted on a platform on the front deck.

The galleas was another variation on the galley. Developed by the Venetians, the galleas had a gun deck, oars, and two to three masts. The triangular lateen sails, adopted from those of the Arab dhows, permitted the galleas to sail nearly straight into the wind, impossible with square sails. Sailors armed with crossbows and lances could fight on the ships’ decks.

The last major naval battle in which galleys were employed was the Battle of Lepanto II, fought off the coast of southwestern Greece on October 7, 1571, between the Ottoman Turks, under the command of Ali Pala (died 1616), and the Christian forces, under the command of Don Juan de Austria (1547-1578), half-brother of King Philip II of Spain (1527-1598). The Turks’ 273 ships (210 were galleys) and the Christians’ 276 ships (208 were galleys) faced off in long lines across from one another, with the Christian forces hemming in the Muslim forces. Don Juan skillfully placed his most heavily armed galleys in the center of the line and his smaller, more maneuverable galleys on the outside, where they could dominate the flanks. The massive and heavily armed Christian galleys eventually triumphed over the lighter and less armed Arab ships, giving naval supremacy to the Christian forces in the Eastern Mediterranean. The Battle of Lepanto was the last major naval battle in which galleys were employed, and it was the first major naval battle in which guns and gunpowder played the decisive role. From this point on, guns and cannons would be increasingly important in naval warfare.

Although the galley was the vessel of choice in the Mediterranean Sea for more than four millennia, it was a typically unstable ship, particularly in rough waters. Maneuverability during battle was provided by oars, rather than by the sails, which had to be lowered during battles to prevent the enemy from tearing or setting fire to them. Despite their shortcomings, however, various forms of galleys continued to be employed in the Mediterranean until 1717 and in the Baltic Sea until 1809. In an effort to produce a more seaworthy craft, medieval shipbuilders turned to other designs for seagoing vessels.
Posted by Mitch Williamson at 7:08 AM