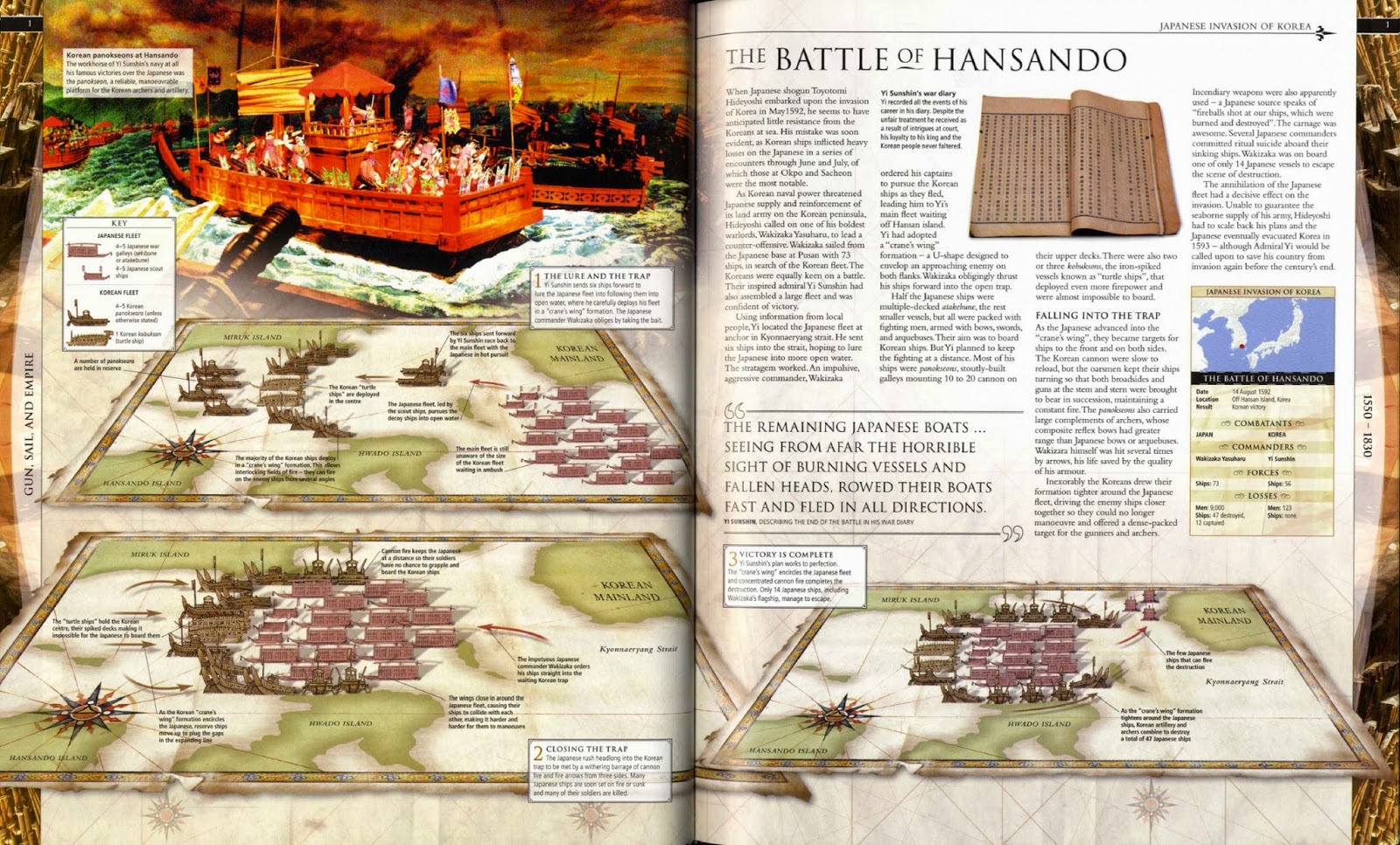 After the successful unification of Japan, Japanese warlord Toyotomi Hideyoshi made two attempts to seize Korea as the first step in a Japanese conquest of China. Japanese defeats at sea, however, made the maintenance of supply lines between Kyushu and Japanese bridgeheads in southern Korea increasingly difficult, and the campaigns were eventually abandoned.

In the first campaign Hideyoshi landed some 160,000 men in southern Korea, his army advancing north with relative ease. The Japanese suffered reverses at sea, however, under Korean naval units commanded by Yi Sun Sin. In the summer and autumn of 1592 Yi’s navy won some 10 engagements around the southern coast of Korea between Sach’on and Pusan. The largest of these were the 8 July Battle of Hansan-do and 10 July Battle of Angolp’o. At Hansan-do the Japanese had 36 large vessels and 14 medium-sized ships, as well as a large number of junks. Yi sent six ships to lure out the Japanese and then destroyed one of the three formations of the Japanese fleet. He then chased the Japanese to nearby Angolp’o, where he again got them to come out for a full attack and trapped them. In these two battles the Japanese lost some 59 ships. Yi’s fleet continued to blockade the Japanese base at Pusan until the end of the first campaign.

In the second campaign the Japanese navy gained an initial victory. In the 15 July 1597 Battle of Koje-do, the Koreans lost 160 ships and its commander Won Kyun was killed in action. The Koreans were forced to abandon their base on Hansan-do and pull back to the west.

This victory enabled the 140,000-strong Japanese landing force to advance, but it provoked a Chinese intervention and consequently a stalemate on land. In an attempt to support the land forces, the Japanese fleet sailed into the Yellow Sea through Myongnyang Strait, where the Koreans under Yi Sun Sin intercepted it. In the Battle of Myongnyang, 16 September 1597, Yi checked the Japanese advance at sea, and the campaign again reverted to a stalemate. Japanese land forces were besieged in coastal strongholds such as Sunch’on, Sach’on, Pusan, and Ulsan.

This strategic stalemate and Hideyoshi’s death on 18 August 1598 caused Japanese to withdraw its land forces from southern Korea. The last naval battle in the campaign took place during this process. The Japanese garrison at Sunch’on was under blockade by the Chinese squadron under Ch’en Lin and the Korean fleet led by Yi Sun Sin. The Battle of Noryang, 18 November 1598, occurred when a Japanese fleet led by the Shimazu clan tried to break through the blockade. Although the Shimazu fleet was severely damaged by the combined Chinese-Korean fleet, the Japanese Sunch’on garrison was evacuated. Yi Sun Sin was killed in the battle.

Throughout the two campaigns, in contrast to the fighting on land, the Korean navy was always superior. This was in part because of the splendid leadership of Admiral Yi Sun Sin, who nearly always led the entire Korean fleet. In contrast, the Japanese fleet lacked strong leadership and was little better than a combination of small coastal/inland water navies. The Koreans also enjoyed a technological advantage in the form of their armored Kobukson (turtle ships). These formed the core of the Korean fleet and inflicted serious damage on the Japanese fleet. The Korean victories at sea constantly threatened the Japanese supply lines and were one of the major causes of Japan’s abandonment of the campaign.