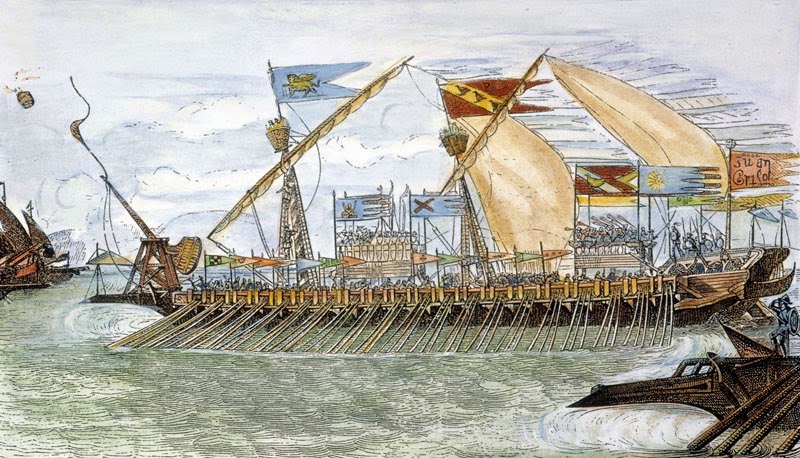 The greatest naval battle fought between Genoa and Venice. At war with Venice since 1294, the Genoese sent an armada of more than 90 galleys into the Adriatic in the summer of 1298 under the command of Lamba Doria. The armada was missing some galleys because of a storm, and most of the fleet proceeded up the Dalmatian coast to the island of Curzola (Korčula), then a feudal possession of the Venetian noble family Zorzi. The Genoese captured and burned the city of Curzola on 5 September 1298. Meanwhile, the Venetians, learning of the Genoese intrusion, had sent a fleet commanded by Andrea Dandolo. When the opposing fleets came into visual contact late on 6 September, the Venetian galleys probably outnumbered the Genoese 96 to 76.

The battle began early on Sunday, 7 September, and seems to have been fought in the channel between the island and the mainland, to the southeast of the city of Curzola. The Venetians, facing southeast, had the morning sun in their eyes. The battle lasted until the afternoon and was marked by heavy casualties on both sides. The Venetians had the advantage initially, capturing 10 Genoese galleys, but later the Genoese were able to take advantage of disorder in the Venetian line and gain a decisive victory. Nearly the entire Venetian fleet was captured or destroyed, except for a dozen galleys that escaped. Andrea Dandolo, the defeated commander, either died in the battle or afterwards as a prisoner (either of fever or suicide). The war ended with the peace treaty of 25 May 1299.

According to a tradition first recorded in 1553 and usually accepted, Marco Polo was taken prisoner in this battle; it was during his imprisonment in Genoa that he dictated his account of his travels.