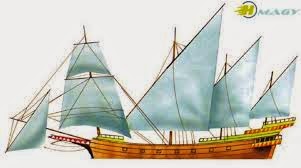 During the sixteenth century the Portuguese, with their large Brazilian possessions, were dominant in the transatlantic slave trade. Speed at sea was essential, as the mortality rate in the slave hold was very high.

Slave ships would moor in creeks on the West African coast in order to rendezvous with their agents in the grim trade. In turn these agents would acquire slaves inland, often from the winners of tribal conflicts where the losers were sold to the highest bidder. At this time there was no ban on slaving in Europe, but official licences were needed. Many captains did without them, as they were expensive to procure. This fast carrack was typical of the vessels involved in the trade, being longer and slimmer in line than a conventional cargo ship.