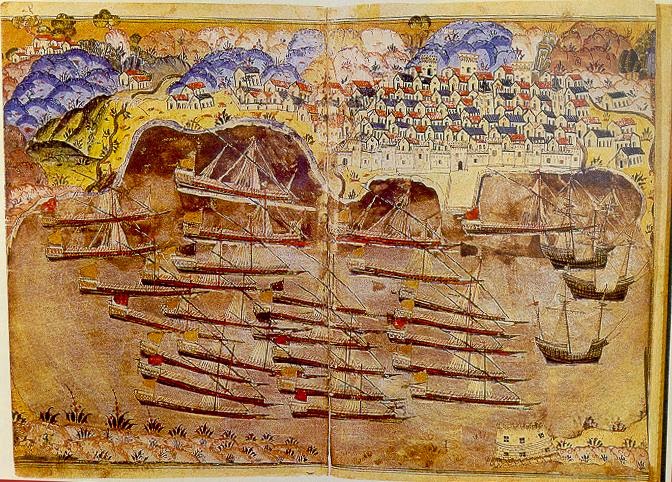 Barbarossa's fleet wintering in the French harbour of Toulon, 1543.

Sultan Süleyman the Magnificent had the good fortune of succeeding Selim I (1512–1520). In his short reign, Selim had thoroughly beaten a newly emergent foe, the Safevid state on the battlefield of C¸ aldýran in 1514. (The Safevids, a Turkish-speaking dynasty who had acquired an Islamic and Persian identity, became the major opponent on the Ottoman eastern frontiers during the fifteenth through the seventeenth centuries.) Selim then (1516–1517) conquered the Arab lands of the Mamluk sultanate based in Cairo, filling the treasury and bringing the Muslim Holy Cities of Mecca and Medina under the Ottoman rulers’ dominion. During the long reign of Süleyman the Magnificent (1520–1566) the Ottomans enjoyed considerable power and wealth. Under Süleyman’s leadership, the Ottomans fought a sixteenth-century world war. Sultan Süleyman supported Dutch rebels against their Spanish overlords while his navy battled in the western Mediterranean against the Spanish Habsburgs. At one point, Ottoman troops wintered on the modern-day Riviera at Toulon, by courtesy of King Francis I of France who also was fighting against the Habsburgs. On the other side of their world, Ottoman navies warred in the Red Sea and the Indian Ocean, as far east as modern-day Indonesia. There they fought because the global balance of power and wealth had been overturned by the Portuguese voyages of discovery around Africa, that opened all-water routes between India and south and southeast Asia. These new passages threatened to destroy a transit trade that Middle Eastern regimes for many centuries had dominated and profited from. To loosen the mounting Portuguese (and later Dutch and English) chokehold on this trade and break its growing dominance of the all-water routes, the Ottomans launched a series of offensives in the eastern seas. For example, they aided local rulers on the India coast who were fighting the Portuguese and sent fleets to aid the Moluccans (near modern Singapore) who were struggling to break mounting European maritime domination. On the Balkan fronts, Sultan Süleyman’s forces similarly moved to impose Ottoman domination over trade routes, rich mines and other economic resources. In an important series of victories, the Ottomans seized Belgrade in 1521, crushed the Hungarian state at the battle of Mohács in 1526 and later (in 1544) annexed part of it. In 1529, Ottoman troops stood outside the walls of Habsburg Vienna, which neither they nor their successors in 1683 were able effectively to breach. By this date the Istanbul-based state stood astride the rich trade routes linking the Aegean and Mediterranean seas to east and central Europe. Thus both Venice and Genoa suffered grievous blows, losing the wealth and power that the trade routes and colonies of these regions had brought them.

If the phrase “expansion” aptly depicts the overall Ottoman military and political experiences until the later sixteenth century, then “consolidation” likely best summarizes the situation during the subsequent century or so. Following Süleyman’s death, Ottoman victories continued but less frequently than before. The great island of Cyprus with its fertile lands became an Ottoman possession in 1571, bolstering Istanbul’s dominance over the sea routes of the eastern Mediterranean. The Europeans’ naval victory at Lepanto in 1571 and utter destruction of the Ottoman navy, one of the greatest in the Mediterranean at the time, proved ephemeral. The next year a new fleet re-established Ottoman dominion in the eastern Mediterranean, the locale of their recent defeat. On land, Ottoman armies captured Azerbaijan between 1578 and 1590 and regained Baghdad in 1638. Crete, the largest of the eastern Mediterranean islands after Cyprus, was incorporated into the state in 1669, followed by Podolia in 1676.
Posted by Mitch Williamson at 12:28 PM