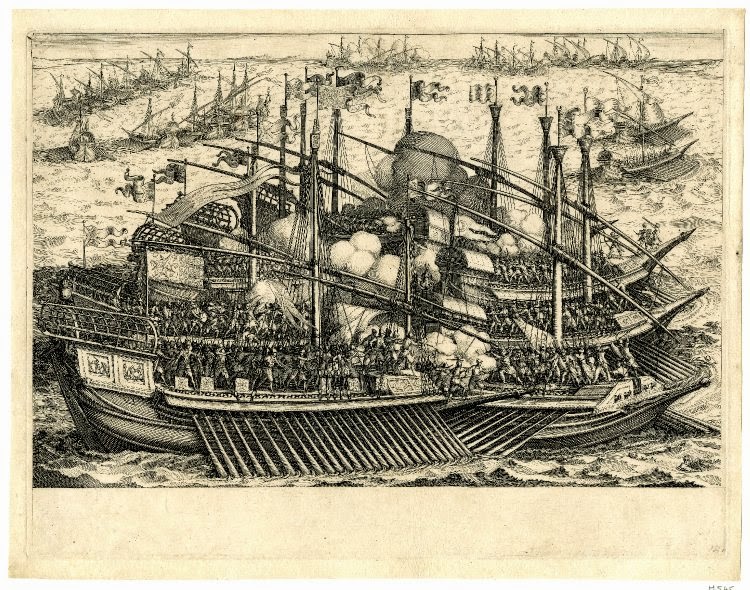 Later generations of Europeans, from the seventeenth century on, would grow increasingly confident, even complacent, regarding their military superiority over the East (excepting such scares as the 1683 siege of Vienna). There was no such confidence in the fifteenth and sixteenth centuries. Then, a long string of battlefield victories indicated that the Muslim world, particularly the wealthy, populous, militant and expanding Ottoman Empire, had every chance of stretching its grasp to seize first Sicily or Vienna, then Naples and Rome, and finally all of western Europe. This was by no means an improbable, or even unlikely scenario. The sultan planned for it, sending his armies and fleets west. In response, the European powers fretted, drew themselves together in a sequence of Holy Leagues and prepared for the sultan's blows. Only the most powerful of Christian princes, 'his most Catholic majesty' the King of Spain, could direct his own sustained offensive east to match and meet the Turk.

The battles of East versus West were of course fought along the shores of the Mediterranean and the banks of the Danube. But there were more exotic, farther flung points of conflict as well: the Renaissance struggle between Muslim and Christian European was the first truly global war. Portuguese exploration into the Indian Ocean in search of pepper, cloves and nutmeg (and also the fabled Eastern ally for the war against the Moors, 'Prester John', eventually identified as the black Christian king of the Ethiopian highlands) brought the age-old conflict of crusader and Ghazi to the monsoon-lands of Asia and East Africa. In 1498 Vasco da Gama made landfall in India. The Portuguese governors 'of India' (their brief actually included the whole of the Indian Ocean) who followed da Gama brought the customs of the Iberian Reconquista - fire and sword - to the work of carving out a maritime empire: this was no mere commercial creation. Afonso da Albuqerque seized Hormuz in 1509, Goa in 1510 and Malacca on the Malay Peninsula - gateway to the spice wealth of the East Indies - in 1511. These were all Muslim cities. Between 1503 and 1513 the Portuguese almost annually raided into the Red Sea; in 1517 they almost seized Jiddah, the very port of Mecca. The Mameluke sultan in Cairo (until 1517) and thereafter the Ottoman sultan had to respond to these provocations. In 1508 a Mameluke fleet co-operating with Indian Muslim rulers surprised the Portuguese at Chaul off the coast of India, but this Muslim-allied fleet was destroyed the following year. In 1538 a large Ottoman army landed at Diu in India, but failed to take the Portuguese city despite the support of a massive siege battery of 130 guns. In 1552 the Ottomans attacked but failed to retake Hormuz; Portuguese counter-raids reached Basra in southern Iraq. In 1567 as many as forty Ottoman ships arrived at Sumatra to aid the Muslim sultan of Atjeh. Significantly this expedition coincided exactly with a peak in Ottoman activity against the Christian powers in the Mediterranean. This was indeed a world war.

Posted by Mitch Williamson at 3:47 PM