Ships of the Crusade Era Part I 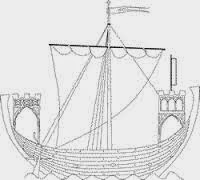 A stylised drawing of a Nef

The types of ships involved in the crusades at various times were referred to in contemporary sources by a wide variety of different names, and in most cases the types of vessels to which the terms corresponded are known reasonably well; however, there are exceptions that are sometimes difficult to categorize with certainty. This is particularly true of the Muslim world. Only a handful of scholars have addressed the issues, and none have examined the nature of the ships involved, their historical evolution, and their performance capabilities, issues that influenced, indeed governed profoundly the actual participation of naval forces in the crusades.


Terminology
The first Western fleet to sail to the East in the period of the crusades was probably that commanded by Guynemer of Boulogne, who anchored off Tarsos (mod. Tarsus, Turkey) in September 1097. His vessels are characterized merely as naves by the chronicler Albert of Aachen, who was undoubtedly using the term as a generic for ships. The Genoese fleet that sailed in summer 1097 reportedly consisted of 12 galee (galleys of a new Western design) and 1 sandanum. The term sandanum was a Latinization of the Greek chelandion, for a transport galley. The Pisan fleet that left in summer 1099 reportedly numbered 120 naves, while that of the Venetians that sailed in summer 1099 had at least 30 naves. The fleet of Sigurd Jorsalfar, which left Norway in 1107, was said by Thórarin Stuttfeld to have consisted of 60 ships (ON skip). In 1123 the Venetian fleet that sailed for Outremer reportedly numbered 120 naves plus some small boats (Lat. carabii).

During the Third Crusade (1189–1192), a Northern fleet of 50 ships referred to as cogas (cogs) reached Acre (mod. ‘Akko, Israel). The fleet of Richard I the Lionheart, king of England, consisted of ships variously called esneccas or enekes, galees, naves or nefs, dromonz, and bucee. For the Fourth Crusade (1202–1204) the Venetians supplied a battle fleet of 50 galeae (galleys) and a transport fleet consisting of naves for the men and uissiers for the horses. In 1217 Count William I of Holland led a fleet of coccones to Damietta in Egypt. For his Crusade of 1227–1229 the Holy Roman Emperor Frederick II prepared various fleets of ships described as naves, galee, usseria, chelandre, and taride. King Louis IX of France contracted with Marseilles and Genoa for squadrons of naves, taride, and galee for his Crusade of 1248–1254.

Byzantine sources of the crusade period mostly use classical Greek terms such as trieres (pl. triereis) or generic terms such as naus (pl. nees) or ploion (pl. ploia) for ships, although Anna Komnene and Niketas Choniates occasionally use dromon (pl. dromones), the term par excellence for Byzantine war galleys since the sixth century. From the late twelfth century a new term, katergon (pl. katerga), began to be used, displacing dromon and becoming the generic for war galleys during the late Byzantine Empire.

Such words were rarely used in a technical or technological sense. Most authors were unfamiliar with the sea, were not writing for maritime audiences, and used approved or literary terms for ships even if they did know what particular types ought to be called. Generic terms such as naves, nees, or ploia, and sufun/safā‘in or marākib were used for all types of ships in fleets. The Latin word naves was used for all ships of the Pisan and Venetian fleets in the First Crusade (1096–1099), even though they included galleys. But as well as its generic meaning, by the twelfth century the term navis/naves had acquired a specific reference in a Mediterranean context to lateen-rigged, round-hulled sailing ships.

Evolution of Ship Types
The historical evolution of ship types was continuous. A type could change in its fundamental technology and yet retain the same name, as in the case of the cog. Alternatively a name could become applied to a completely different type of ship, as occurred with dromon in its Latin and Arabic variants. By the twelfth century it was used for sailing ships that had nothing in common with Byzantine galleys.

In the centuries before the First Crusade, Mediterranean maritime commerce was carried on a cloud of small sailing ships. Judging from excavations of shipwrecks (the Yassý Ada ship of the seventh century, the Bozburun ship whose timbers were felled in 874, and the early eleventh-century Serçe Limani ship, all from within modern Turkey, and the thirteenth-century Contarina ship found near Venice), such ships averaged around 20 meters (c. 651/2 ft.) in overall length, around 5 meters (c. 161/2 ft.) maximum beam, and around 2–2.5 meters (c. 61/2–81/4 ft.) depth in hold. They probably had single masts and lateen sails, were steered by two stern-quarter rudders, and carried multiple anchors because of their inefficient design and light weight. Smaller versions had only half-decks at bow and stern. Larger ones were fully decked with a small, low cabin at the stern, such as was the case with the Yassý Ada ship.

There certainly were large ships, such as the fine one sailing up the Bosporus that reportedly incensed the Byzantine emperor Theophilos (d. 842) when he learned that its owner was his wife Theodora, or the three-masted “pirate” naus reported by Anna Komnene during the First Crusade. Three-masted sailing ships certainly existed in the eleventh century, as is proved by a depiction on glazed Pisan bacini, which were glazed pottery bowls from the Muslim world placed on the facades of churches at Pisa and elsewhere to reflect sunlight and give the churches a glittering aspect. However, such large ships have left no trace in the documentary record before the thirteenth century.

In the Mediterranean, ships had always been built with strakes edge-joined: that is, with the planks of the hull joined edge to edge and not overlapping as in clinker construction. In classical antiquity, hulls had been shell-constructed from the keel out by holding the strakes together with closely spaced mortise-and-tenon joints pegged with treenails (wooden pegs). Frames were inserted only when hulls had been built to a point where they could be usefully positioned. This produced light and strong hulls but was extremely expensive in terms of the labor and carpentry skills required. By the fourth century (as evidenced in another wreck found at Yassý Ada), tenons had become less tightly fitting, wider but shorter, and spaced more widely apart. The evolutionary process was yet more clearly apparent in the seventh century Yassý Ada wreck. The Bozburun wreck showed no signs of mortise-and-tenon edge-joining, and by the eleventh century, in the Serçe Limani wreck, skeleton construction over a framework of ribs and stringers had replaced shell construction.

Coating ships with a layer of pitch over the whole hull was replaced by driving caulking into the seams between the planks. The first usages of the Greek word for a caulker (kalaphates) occurred in sixth-century Egyptian papyri and appeared in Byzantium itself in the tenth century, in inventories for expeditions to Crete in the De cerimoniis attributed to Emperor Constantine VII Porphyrogennetos, which included linen for, and the cost of kalaphateseos: caulking. The first picture of caulkers working on a ship is in a manuscript of the De materia medica of Dioskorides Pedanios, probably made for Emperor Constantine VII (MS New York, Pierpont Morgan Library, 652 fol. 240r).

In northern Europe, ships were also shell-constructed, but there strakes were not edge-joined but rather clinker-overlapped. Up to the eleventh century, the sailing ship par excellence was the Norse knörr (ON, pl. knerrir). Two such ships, dated to around 1000, were among 5 ships excavated off Skuldelev in Roskilde Fjord (Denmark). The smaller was around 13.72 meters (45 ft.) long and around 3.20 meters (101/2 ft.) in beam, the larger around 14.94 meters (49 ft.) long and 4.57 meters (15 ft.) in the beam. Both had half decks forward and aft and an open hold amidships. The mast of the smaller was socketed into the kelson, with a stringer laid over the floor timbers and keel to provide fore-and-aft rigidity and to lock the floor timbers to the keel, while that of the larger was set in a complex mast-step. Both would have been steered by a starboard stern-quarter rudder. The larger may well have ventured out into the Atlantic Ocean, since it was heavily built with sturdy frames. Larger knerrir were primarily sailing ships, using what oars they carried only for entering and leaving harbor, for close maneuvering, and in emergencies.

The Skuldelev ships also included two long ships (ON langskip) like the famous ships excavated at Oseberg and Gokstad. The Oseberg ship (from around 800) and the Tune ship (from around 875) had dimensions of 21.4 meters (701/4 ft.) in length, 5.1 meters (163/4 ft.) in the beam, and 1.4 meters (41/2 ft.) depth in hold and around 20.0, 4.6, and an unknown depth in hold respectively (651/2 and 15 ft.). The Gokstad ship (of around 900) was 23.4 meters in length, 5.2 meters in the beam, and 1.9 meters depth in hold (763/4, 17, and 61/4 ft.). Those of the two Skuldelev ships were approximately 18, 2.6, and 1.1 meters (59, 81/2, and 31/2 ft.) and 30, 4.2 meters (981/2 and 133/4 ft.), and unknown depth in hold, respectively. The Oseberg ship carried 15 pairs of oars, the Tune and smaller Skuldelev ships 12 pairs. The Gokstad ship carried 16 pairs of oars and the larger Skuldelev ship between 20 and 30 pairs. In Norse literature the terms langskip and “snake” (ON snekkja, pl. snekkjur) were interchangeable, although snekkjur may have been larger. As the length of northern longships began to increase, the largest became known as drekar, “dragon ships” (sing. dreki). Those such as the Gokstad ship and the larger Skuldelev ship would certainly have been capable of voyages to Outremer; however, whether Norse langskip, snekkjur, or drekar actually made such voyages is debatable. Crews would have been much more comfortable in knerrir, and there would have been no reason to use longships unless naval combat was expected.

In England knerrir became known as céolas (OE sing. céol), that is keels, perhaps reflecting originally the pronounced keels of Norse ships as opposed to keel-less Frisian hulks and cogs. By the eleventh century the Old English term céol was used commonly for sailing ships in the lower North Sea and English Channel. Another name that appeared increasingly from the eleventh century was bussa/busse/bus/buza (Lat. bucia/bucius); however, whether the Mediterranean Latin bucia/bucius was adopted in the north or vice-versa is unclear. No descriptions of these terms permit attribution of particular characteristics to ships. Nor do illustrations name types until much later. By the thirteenth century ships like knerrir but with light and possibly demountable castles added at the stern, and sometimes the bow, appeared on town seals. Beam ends through the hull of some were probably deck beams. Such ships were probably the buciae in the English fleet of the Third Crusade, and according to Richard of Devizes, the naves of the English fleet, which were only half the size of the buciae, carried forty foot soldiers and forty horses as well as their supplies. The Norse snekkja was also imitated in England under the names esnecca or esneke. King Henry II had a sixty-oared esnecca that made the voyage to Outremer during the Third Crusade. Other flotillas of snekkjur and smaller oared ships from France, Flanders, and Denmark also participated.
Posted by Mitch Williamson at 11:32 PM