Book Review: Empires of the Sea: The Siege of Malta, the Battle of Lepanto, and the Contest for the Center of the World. 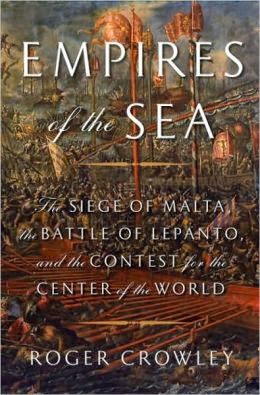 Exciting re-creation of the epic mid-16th-century struggle between the encroaching Ottoman Empire and the beleaguered Christian Europeans.

Crowley picks up where he left off in 1453: The Holy War for Constantinople and the Clash of Islam and the West (2005). After the fall of Constantinople to Mehmet the Conqueror and his army of Turks, the author writes, it was only a matter of time before Mehmet’s great-grandson Suleiman set out to achieve his own ambition to become “Padishah of the White Sea”—the Mediterranean. From the 1520s on, Suleiman and later his son Selim II clashed repeatedly with Charles V and then Philip II of Spain in a battle for holy ascendancy that stretched from Rhodes to Tunis, Cyprus to Lepanto. Suleiman unleashed his murderous corsairs, led by the Barbarossa brothers, to wreak havoc on the Barbary Coast (North Africa), while Charles employed the astute services of the valiant Genoese sea commander Andrea Doria. Radiating from Madrid and Istanbul across Europe, the engines of imperial power collided catastrophically in 1565 on the rugged island of Malta, a launch pad for the crusading Knights of Saint John headed by the zealous Jean Parisot de La Valette. Here Crowley lingers with chillingly detailed precision, depicting the armada of Turkish galleys bearing down on the island. Seventy-year-old La Valette and his 6,000 or so fighting men hastily prepared for defense against an Ottoman force exceeding 20,000. The Knights and the rest of Europe were convinced that this was the final redoubt, “the glorious last-ditch stand against impossible odds, massacre, martyrdom, and death.” What ensued was a four-month bloodbath, with the Christians routing the Turks and checking their advance into the White Sea.

A masterly narrative that captures the religious fervor, brutality and mayhem of this intensive contest for the “center of the world.”
Posted by Mitch Williamson at 8:08 AM