Navigation and Ships in China 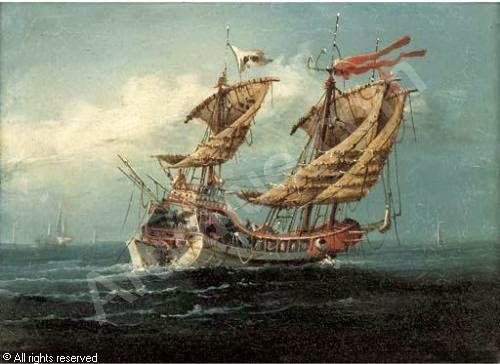 This picture of a medieval Chinese war junk distorts many of the key features to give a dramatic effect, but it does illustrate the multiple decks, the highly responsive rigging and steering systems, including a stern rudder controlled by a tiller and a lateral auxiliary steering oar.

It was the increasing number of guns on the European warships of the sixteenth, seventeenth and eighteenth centuries that were to make them particularly effective against the ships and coastal fortifications of the Orient. The Chinese, for example, had long used artillery in warfare, but they did not employ large guns on their ship.

The seas of the Far East are far more windswept than the Mediterranean, so the use of paddles and oars as methods of propulsion did not override the importance of sails. The earliest clear evidence of the use of fore and aft sails in China dates to the third century ad, but it seems likely that they were developed well before then, and simple, square sails may have been in use some two thousand years earlier. The long coastline of China, punctuated by several major river estuaries, of which the Yangtze is the longest and broadest, gave rise to a myriad of seafaring communities. By the end of the first millennium ad they had evolved a variety of ships for use in both coastal and long-distance seafaring. The fruits of their experience produced the characteristic Chinese sailing ship, usually called the junk (from the word jonq used by Arab sources), which was suitable for both high seas and broad rivers like the Yangtze.

From the thirteenth and fourteenth centuries ad we have vivid descriptions of harbours thronged with seagoing ships by the Venetian traveller Marco Polo (1254–1324) and the widely travelled Arab geographer Ibn Battuta (1304–77). By combining European and Chinese written accounts with artistic and archaeological evidence we can put together a picture of the typical large trading vessels of fourteenth century China. They were plank-built from pine or fir, using iron fastenings and a variety of caulkings, and they had internal, watertight bulkheads. They were equipped with from four to six masts and a complex set of sails made from both canvas and matting, stiffened with battens. The hull was gently curved, rather than entirely flat, but there was no keel and the stern ended in a broad vertical board, or transom, which easily accommodated a stern rudder, attached to a post. This latter invention seems to date from as early as the fourth century AD. The stern rudder, when combined with pivoted sails, which were much easier to adjust to the strength and direction of the wind than the standard riggings of the Arab and Western traditions, and other technical innovations, such as the drop-keel, or dagger board, enabled Chinese mariners to sail their junks very close to the wind and make very quick, precise changes in direction.

The political and economic efforts of two dynasties, the Sui (581–617) and the T’ang (618–907), laid the basis for an imperial expansion which resulted in Sung China (960–1279) emerging as the dominant power in the Far East on both land and sea. Chinese naval power was not primarily directed towards the high seas, however, and the expansion of commercial contacts was largely in the hands of enterprising private traders, who often had to contend with an imperial authority that was extremely wary of foreign contacts. To a large extent this can be blamed on the persistent problem of invasions from the steppes.

In the reign of the early Ming emperor Yung-le (1403–24), when China was recovering from the internal disruption and economic problems of Mongol rule, there was a brief period of maritime imperialism, exemplified by the voyages of Cheng Ho (1371–1433). Cheng Ho was a Muslim from southern China who was entrusted with a series of expeditions that were a combination of military and diplomatic missions, intended to assert the prestige and power of China in the Indian Ocean and South-east Asia. They involved some 200 large vessels crewed by nearly 30,000 men – sailors, soldiers, diplomats, scholars and traders. The impact of these voyages was dramatic. Chinese naval power was demonstrated at a time when piracy, particularly from Japan, was a growing problem. China’s economic position in the region was enhanced and the imperial court was inundated with rich gifts, embassies from distant peoples, all anxious to better their trading prospects. Yet the successors of Yung-le did not follow up his initiative and attempt to push the boundaries of political power outwards to the fringes of the commercial networks that China was linked into. Instead, again in response to the enormous pressure of incursions on their northern frontiers, they reverted to the defensive, inward-looking posture on both land and sea that had characterized earlier dynasties. External seafarers were still welcome at Chinese ports and there were many Chinese who traded overseas and settled in South-east Asia and India.
Posted by Mitch Williamson at 1:22 PM