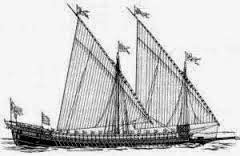 At the beginning of the eleventh century, one would have assumed the future naval power of the Iberian Peninsula would be the Caliphate of Cordoba. The Christian kingdoms of Castile, Aragon and the counties of Catalonia, were small entities restricted to the northern portion of the peninsula, while the kingdom of Portugal did not yet exist. The Caliphate of Cordoba on the other hand had a highly developed naval organisation, due in large part to the Viking raids of 844. In that year a fleet of approximately a hundred longships attacked and sacked Lisbon, Seville, Cadiz, Medina Sidonia, and Algeciras. They were eventually driven off, but the raids had made an impact on the Muslim government. The response was to establish permanent arsenals and squadrons at the coastal cities along with a series of coastal watchtowers. When the Vikings returned in 859 they found the Caliphate to be a much tougher opponent and, though able to sack Algeciras, they suffered a series of defeats that discouraged them from ever returning in force.

Compared to this centralised approach to naval warfare, the Christian kingdoms relied on a rather ad hoc system in which the defence of the northern coast was left to local ports. Part of the reason for this was that Castile and Aragon were occupied with expanding their kingdoms southward on the peninsula. However, by the twelfth century both kingdoms were beginning to augment their naval presence primarily in a response to their growing maritime commerce and the problem of endemic piracy. The line between piracy and commerce was often blurred and merchants often preferred to use galleys, which could quickly switch to an offensive posture when a target of opportunity presented itself.

Whereas the use of the galley for commerce and warfare had a long history in the Mediterranean, it was also the preferred warship in the Bay of Biscay at this time. In 1120 the bishop of Santiago de Compostella hired a Genoese shipwright to build two bireme galleys at the local arsenal to combat Muslim pirates. Muslim pirates operating on the north coast were a continuing problem in the tenth and eleventh centuries, but this was somewhat diminished by the establishment of the kingdom of Portugal and the fall of their base at Lisbon in 1147. The galley would remain the preferred warship in the Atlantic well into the fourteenth century. The most common warship in the major battles fought between Castile and Portugal in the thirteenth and fourteenth centuries was the galley, though by the thirteenth century the northern ports of Galicia and the Basque region were beginning to use armed keels, clinker-built ships based on Viking construction techniques. While primarily a merchant vessel, a keel could be quickly transformed into a warship with the addition of light castles fore and aft. In the siege of Seville in 1248 these northern vessels were used to blockade the Guadalquivir River to prevent Muslim vessels from relieving the city.

The twelfth century saw the expansion of the naval power of Castile, Aragon and Portugal, but these nascent naval powers were not dominant in any sense. Aragon was rapidly expanding its maritime presence in the Mediterranean following its merging with Catalonia in 1137. In an attempt to stamp out the endemic piracy emanating from the Balearic Islands, the count of Barcelona enlisted the help of Pisa in an expedition against the islands. Likewise the short-lived conquest of Almería in 1147 by a combined force from Castile and Aragon relied heavily on Genoese ships. The Portuguese, while having some success at sea against Muslim forces, still did not have a fleet sufficient to threaten them effectively. In 1182 the Portuguese attacked Ceuta with twenty-one galleys, but were overwhelmed by a defending Muslim fleet of fifty-four vessels. All of these states were relying heavily on private vessels for naval operations. While for specific undertakings the monarchies might build some vessels, none of them maintained a royal fleet. In large part this was due to the fact that the states had not consolidated their territories or authority, nor had they the fiscal mechanisms to maintain a permanent fleet.

The thirteenth century would see a number of profound changes in how naval warfare was conducted and organised. Much of the change was brought about by the consolidation of the territorial boundaries of Portugal, Castile and Aragon by the mid-thirteenth century. By 1251 Alfonso III of Portugal had expelled the Muslims from the Algarve, while Castile had captured Seville in 1248 and the mouth of the Guadalquivir River. The result of this expansion was that Castile found itself in possession of two significant coastlines separated by the sometimes hostile kingdom of Portugal. Aragon had expanded rapidly also, first by capturing Mallorca in 1229 and then by the complete conquest of Valencia in 1245. By 1250 the Crown of Aragon controlled the eastern seaboard of the Iberian Peninsula as well as the strategic island of Mallorca. The rapid expansion of all the kingdoms and decreasing open territory also meant that they would soon be involved in naval operations against each other as well as against the Muslims. By the second half of the thirteenth century these monarchies began to solidify their power and authority with attempts to regulate maritime trade and to control and monopolise maritime violence along their coasts. It is no coincidence then that the first state naval organisations began to appear at this time and while they had much in common, they also differed substantially. In a sense, the problems with financing and political authority encountered by these nascent organisations were precursors of the difficulties that would bedevil the Spanish monarchy in the sixteenth and seventeenth centuries.

Aragon by the second half of the thirteenth century had expanded its interests to North Africa, and in doing so had come into direct conflict with Angevin pretensions for control of the Mediterranean. When the Aragonese invaded and captured Sicily in 1282 they obtained a strategic location and, more importantly, absorbed a naval administration dating back to the Norman period. For a period of thirteen years Aragon was able to operate a permanent royal fleet on a year-round basis. The reason this was sustainable was that the Crown of Aragon was able to establish a centralised naval organisation under the control of the office of the admiral. The old Norman and Hohenstaufen administrations provided an organisation and network of arsenals capable of maintaining a fleet. More importantly, Sicily had an established system of taxes for supporting the fleet so that the crown did not have rely on Iberian sources for funding, which would have been problematic at best. The result was that, until the Aragonese left Sicily by treaty in 1295, the Catalan-Aragonese fleet was one of the most effective naval units in the Mediterranean.

The Crown of Aragon also had the additional asset of an established maritime community in Catalonia that designed and built warships for the fleet. The result was the design of galleys with particularly high forecastles and poops to accommodate and protect the deadly accurate Catalan crossbowmen. This enabled the fleet to engage the much larger Angevin fleet, which used galleys with low bulwarks, and to defeat it on a consistent basis. The Catalan community also provided experienced commanders to the fleet. The combination of the Sicilian and Catalan maritime communities, organised under the control of a central naval authority, proved highly effective and was one factor contributing to the collapse of French ambitions in the Mediterranean during the thirteenth and fourteenth centuries. However, when the Catalan-Aragonese fleet left in 1295, the system essentially collapsed. The Sicilians lost most of the officer corps and the amphibious units. For the Crown of Aragon it was an issue of finances. From 1285 until 1348 the Crown was constrained by the union of Aragon and Valencia, which restricted the king’s ability to impose any new taxes. This political fragmentation ensured that the Crown would not be able to introduce fleet taxes in any form. Without consistent funding for the fleet, the centralised organisation developed in Sicily could not be maintained in Aragon. The office of the admiral would remain, but it only controlled the Arsenal and ships at Barcelona and did not have the overarching control of the other ports of the kingdom as it had in Sicily. The Catalan fleet was still a force to be reckoned with as the Genoese discovered in the loss of their fleet while fighting for the control of Sardinia in 1353. In 1382 the Catalans would defeat a Milanese fleet, ensuring that Sicily stayed in the Aragonese sphere of influence. However, the inability to impose a fleet tax and a small population base would constrict Catalan-Aragonese naval power.
Posted by Mitch Williamson at 7:35 PM