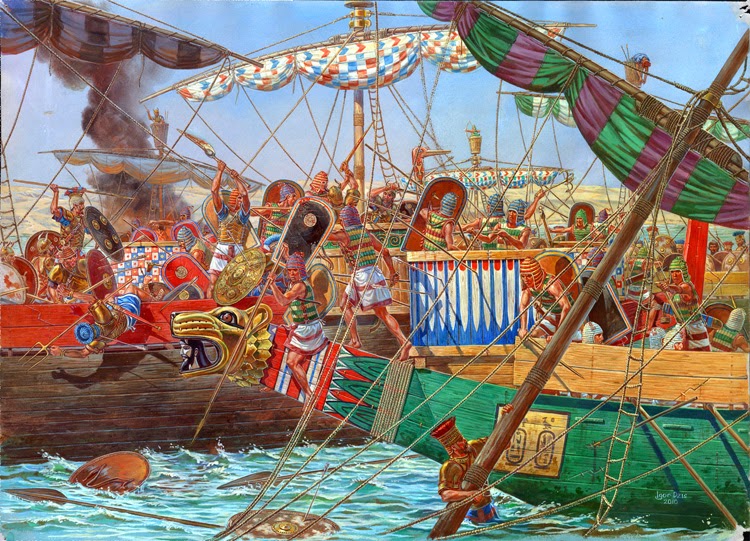 From earliest times the Egyptians engaged in naval conflict. The famous Gebel el-Arak knife, which was found in Egypt and dates to the Predynastic Period, has scenes carved on its ivory handle that depict some kind of armed conflict in which a sea battle is fought out between two different types of ships. This may represent an attempt to invade Egypt, or one stage in a conflict for which one possible entry route would have been across the Red Sea and into the Eastern Desert before passing into the upper part of the Nile Valley.

There were later naval conflicts between vessels and their crews, for example, when the Egyptians captured two Syrian ships during the fifth campaign of Tuthmosis III. In the later years of the New Kingdom, however, the Egyptians fought classic sea battles against an enemy referred to as the “Sea Peoples” in the inscribed records of the conflicts preserved on the temple walls at Karnak and Medinet Habu. They were a confederation of peoples or tribes who attacked Egypt during the reigns of Merenptah and Ramesses III. They probably came from several different homelands, but after the turn of the thirteenth century they were apparently driven southward, perhaps by hunger and displacement. Some groups, however, were known in earlier times, and one— the Sherden—fought as Egyptian mercenaries in the reign of Amenhotep III.

Some Sea Peoples fought as allies of the Hittites against Ramesses II and his troops at the Battle of Kadesh. It was their increased and repeated pressure, however, together with Assyrian attacks, that eventually overthrew the Hittite kingdom. The Sea Peoples then attacked Cyprus and the coastal cities of Syria before moving down through Palestine and joining Libyan tribes to form a coalition that attacked Egypt from the west. They intended to invade the Egyptian coast and then to establish a new homeland in Palestine and the Egyptian Delta. They brought their families and possessions with them, transported in oxdrawn carts. Ramesses III finally defeated them when he blocked their entry by land into Egypt by deploying his garrisons in Palestine; simultaneously, he destroyed their fleet in a sea battle fought in one of the mouths of the Nile.

During the earlier reign of Ramesses II the Sea Peoples had been pressing down into Asia, the Aegean area, and Libya, while a coalition of Libyan tribes—the Tjemehu, Tjehenu, Meshwesh, and Libu—were possibly driven by hunger to invade and settle in Egypt. Ramesses II dealt with these incursions by building a series of forts along the western coast road, but the threat was renewed during the reign of his son Merenptah.

After the long reign of Ramesses II, his thirteenth son Merenptah was faced with several major crises. In year 5 of his reign (c.1231 BC) there was an attempted Libyan invasion. Driven by hunger to raid the western Delta, a coalition of Libyan tribes (the Libu, Kehek, and Meshwesh) joined forces with the Sea Peoples who now approached Egypt from the Aegean Islands and the eastern Mediterranean seeking new homes. They included the Sherden, Sheklesh, Lukka, Tursha, and Akawasha, and they brought their families, cattle, and personal possessions with them.

This coalition, led by a Libyan prince, engaged the Egyptians just northwest of Memphis. Merenptah mobilized his army and after a six-hour battle achieved complete victory. The Egyptians recorded that they took over 9,000 prisoners and large quantities of booty; they also killed many of their enemies, and the Libyan prince fled back to his own people in disgrace.

This conflict is recorded in several Egyptian sources, including inscriptions in the Temple of Karnak and on a stela from Athribis and the famous Israel Stela. This granite stela usurped from Amenhotep III was set up in Merenptah’s funerary temple at Thebes.

The danger posed by the Sea Peoples was temporarily halted, but under Ramesses III it reached a climax. He was the last great warrior king of Egypt although he was forced to pursue a defensive rather than an active policy. In year 5 of his reign he faced a coalition including the Libyan tribes of Sped, Libu, and Meshwesh who were again seeking land in the Delta. The king completely defeated them and took captives who were forced to become laborers in Egypt.

In year 8, however, there was an even greater threat when a confederation of Sea Peoples (including the Sheklesh, Sherden, and Weshwesh, who all occur in earlier records, and the new groups known as Peleset, Tjekker, and Denen) attacked Egypt. They planned to settle in Syria, Palestine, and the Egyptian Delta and once again brought their families, possessions, and ox carts.

This time the action involved a double attack mounted from the sea and land; one group marched down the Syrian coast, accompanied by their families, while a considerable fleet escorted them offshore. Ramesses III mobilized his garrisons in Palestine to hold off the land attack while he prepared his main troops in Egypt. At the same time the Egyptian fleet trapped the enemy ships in one of the mouths of the Nile and destroyed them. In the mortuary temple of Ramesses III at Medinet Habu there is an important record, preserved in wall reliefs and inscriptions, of his conflict with these enemies. Details of this victory are recorded in the scenes rather than the inscriptions, providing a unique depiction of a naval battle. Various stages of the engagement are shown in one picture: Egyptian soldiers attack the enemy from the deck of their ship while opposite them an enemy vessel is held in the vice of grappling irons. Its crew is in disarray, and two fall into the water. Another enemy ship is attacked by a shower of arrows shot from the land. The inscriptions record that a net was prepared to trap the enemy. When they entered the river mouths they were caught in it and butchered to death.

These pictorial representations show the Egyptian fleet returning home with numerous bound captives; one seeks to escape but is taken by a soldier on the bank. Thus, the invaders were utterly defeated and the incursions of the Sea Peoples were arrested. Some of the attackers such as the Meshwesh managed to remain in Egypt, however, and became soldiers for the Egyptians. Eventually they were rewarded for their services with gifts of land, and a descendant of this group became the founder of Dynasty 22. Other tribes—the Peleset and Tjekker—remained and settled in Palestine where they eventually supplanted Egyptian sovereignty.

Ramesses III faced a final conflict in year 11 when he again defeated a Libyan coalition of Libu, Meshwesh, and five other unnamed tribes who tried to overrun the Delta. Supported by his forces at the frontier forts, the king engaged in a land battle and expelled the coalition, killing more than 2,000 and taking many prisoners and much booty. The commander of the Meshwesh was captured and killed. The danger of direct invasion by these people was thus eliminated, but their arrival in the region had a profound effect on Egypt and her neighbors.
Posted by Mitch Williamson at 5:37 PM