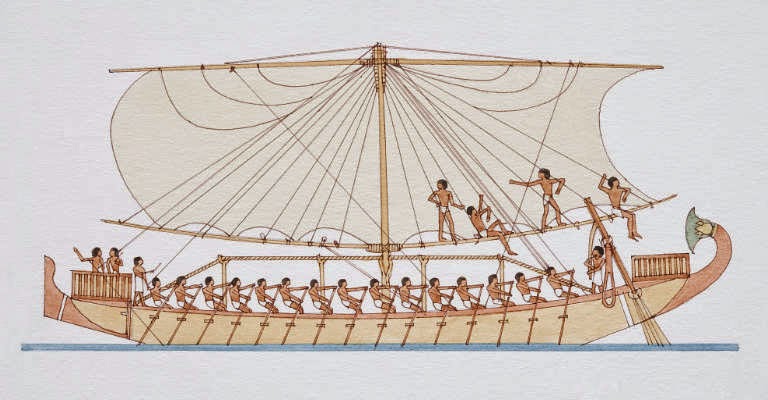 Most information about the organization of the royal navy comes from the Nauri Decree and various biographies of officials. These indicate that the recruits (w’w) were professional sailors, often the sons of military families. They usually served on warships. At first they were assigned to training crews directed by a standard-bearer of a training crew of rowers, and then they progressed to join the crew of a ship. No exact information is available about the number in each crew, but this appears to have varied from ship to ship. Scenes in some tombs at Thebes show the sailors clothed in special leather loin cloths (two kinds apparently existed).

On board the sailors were responsible to the commander of rowers; his superior was the standard-bearer. Navigation, however, was under the control of the ship’s captain and the captain’s mates. Their overseer, the chief of ship’s captains, probably commanded several ships. Above the standard-bearer was the commander of troops, a title usually held by older men; this seems to have been an appointment with land-based duties rather than active seagoing duties. At the pinnacle of the naval hierarchy were the admirals, responsible to the commander in chief (the crown prince), who in turn answered directly to the king. Promotion could be either to a higher rank or to a larger ship, and sometimes a man was transferred from a ship to an army regiment. In some inscriptions it is not always clear if the text refers to a ship or to a regiment.

Conditions of service for soldiers and sailors must have varied greatly, and some literary texts describe the miseries of their lives. In contrast to the tough physical conditions they often had to endure, however, there were compensations. In the New Kingdom they enjoyed many rewards including access to booty from campaigns, income from their estates, exemption from taxes, and in some cases royal rewards of gold for their bravery.

The army and navy eventually included both Egyptian professional fighters and foreign mercenaries such as Nubians, Syro-Palestinians, and, toward the end of the New Kingdom, Libyans and Sea Peoples.
Posted by Mitch Williamson at 5:34 PM