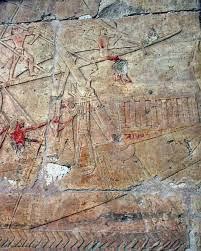 A stone relief from Hatshepsut's temple shows the quarter rudder of an ancient Egyptian Punt ship. Archaeologists and ship designers based their replica ship design on historical images as well as artifacts from the caves at Wadi Gawasis.


The navy was an extension of the army. Its main role was to transport troops and supplies over long distances, although on rare occasions it engaged in active warfare. The sailors were not actually a separate force but acted as soldiers at sea. The two services were so closely associated that an individual could be promoted from the army to the navy and vice versa. During Dynasty 18 the navy played an important role in the Syrian campaigns, when Egypt was establishing and consolidating an empire, and again in Dynasty 20 when the Egyptians repelled the Sea Peoples and their allies. Essentially, however, in wartime the navy was regarded as a transport service for the army and a means of maintaining the bases that the army had set up; in peacetime it made a significant contribution to the development of trading links.

Inscriptional evidence provides useful details about the navy. The record left by Kamose, the Theban prince who helped to expel the Hyksos, relates that vessels were used as mobile bases for military operations in driving out the Hyksos. A wall relief in the Temple of Ramesses III at Medinet Habu also indicates that ships were used for fighting as well as for transport. There is also the personal account of Ahmose, son of Ebana, in his tomb at el-Kab, describing his service in the navy during the early part of Dynasty 18. Reliefs in Hatshepsut’s mortuary temple at Deir el-Bahri, Thebes, provide a vivid, illustrated account of the great expedition to Punt via the Red Sea, which occurred during this queen’s reign. The Gebel Barkal stela is inscribed with the information that ships were built every year at Byblos on the Syrian coast and sent with other tribute to Egypt. Thus, the Egyptians were able to take possession of a regular supply of excellent vessels even though their own country was deficient in building timber.

Byblos also played an important part in supplying the boats that Tuthmosis III took overland to cross the river Euphrates in his campaigns against the Mitannians. He also used ships during his sixth campaign to Syria/Palestine to transport some of his troops to the coastal area, and in his next campaign he sailed along the coastal cities of Phoenicia where he proceeded from one harbor to the next, subduing them and demanding supplies for his troops for their next onslaught. Subsequently, these harbors were regularly inspected and equipped to ensure that they would provide support for the king when he marched inland to extend his attacks against the Mitannians. Even when Egypt’s power declined in the late Dynasty 18, these Syrian ports still apparently flourished.

In addition to these coastal bases, the Egyptians also developed their naval center at home. One dockyard called Perw-nefer was built near Memphis and was probably the chief port and naval base during the reigns of Tuthmosis III and Amenhotep II in Dynasty 18. Ships sailed to Palestine and Syria from this port. There is also inscriptional information (the Edict of Horemheb, Nauri Decree of Sethos I, and Elephantine Decree of Ramesses III) regarding the legal rights possessed by fleets belonging to temples or private individuals.
Posted by Mitch Williamson at 5:32 PM