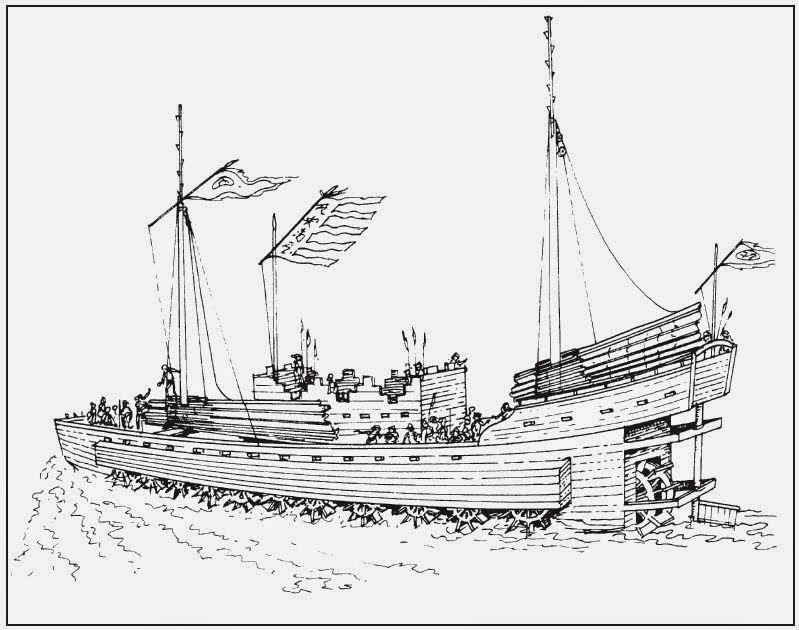 A Chinese naval paddleboat of the twelfth century, propelled by muscle power rather than steam. This kind of vessel was for use on the inland waterways and lakes of China. The attention of the Chinese authorities was generally directed towards maintaining the vast internal economic and military networks. The concept of the paddleboat was known in the Roman Empire, but it was impractical for general use in the Mediterranean.

During the Song Dynasty there was also great amount of attention given to the building of efficient automotive vessels known as paddle wheel craft. The latter had been known in China perhaps since the 5th century, and certainly by the Tang Dynasty in 784 with the successful paddle wheel warship design of Li Gao. In 1134 the Deputy Transport Commissioner of Zhejiang, Wu Ge, had paddle wheel warships constructed with a total of nine wheels and others with thirteen wheels. However, there were paddle wheel ships in the Song that were so large that 12 wheels were featured on each side of the vessel. In 1135 the famous general Yue Fei (1103–1142) ambushed a force of rebels under Yang Yao, entangling their paddle wheel craft by filling a lake with floating weeds and rotting logs, thus allowing them to board their ships and gain a strategic victory. In 1161, gunpowder bombs and paddle wheel crafts were used effectively by the Song Chinese in the Battle of Tangdao and the Battle of Caishi against the Jurchen Jin Dynasty, who made an unsuccessful invasion of the Southern Song along the Yangtze River. In 1183 the Nanjing naval commander Chen Tang was given a reward for constructing ninety paddle wheel craft and other warships. In 1176, Emperor Xiaozong of Song (r. 1162–1189) issued an imperial order to the Nanjing official Guo Gang (who desired to convert damaged paddle wheel craft into junk ships and galleys) not to limit the number of paddle wheel craft in the navy's dockyards, since he had high esteem for the fast assault craft that won the Chinese victory at Caishi. However, paddle wheel craft found other uses besides effective assaults in warfare. The Arab or Persian Commissioner of Merchant Shipping for Quanzhou, the Muslim Pu Shougeng (who served from 1250–1275) noted that paddle wheel ships were also used by the Chinese as tugboats for towing.
Posted by Mitch Williamson at 1:23 PM