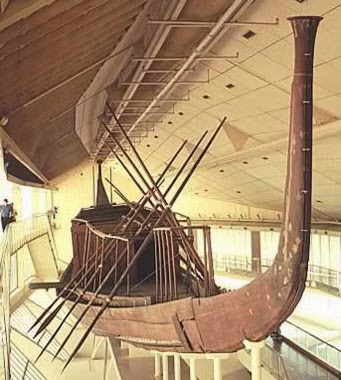 The Cheops ship, the oldest preserved ship from antiquity, was found in 1954 close to the Great Pyramid in Egypt. It is built almost entirely of imported cedar. The ship was clearly a ceremonial vessel, yet compression marks of rope show that it was definitely used in the water.

Dating from 2500 Be, the 'shell-first' design of the Cheops ship shows that the hull was shaped before the internal members were added. It has no keel, and the side planking is lashed with rope for security. Built as a ceremonial vessel, rope compression marks show that it was used on water. Two cabins stand on the ship's deck, the two-roomed main one covered by a canopy for added coolness. The ship was equipped with oars plus steering oars. Contemporary Egyptian warships were of similar construction.

In 1954 two intact Egyptian ships were found at the foot of the Great Pyramid.

Around 2600 BC, during the Old Kingdom, the two planked ships were dismantled and buried in two pits, just outside the great pyramid of Pharaoh Cheops (Khufu). Each pit is 30 m long, carved in the rock and covered with a lid of large stone blocks.

Cheops 1 was assembled 1969-71 and is on public display at the Cheops pyramid outside Cairo, where a museum building was created for the ship in 1982.

The pit believed to contain the second ship, Cheops 2, is still not excavated, but there are plans to open the pit and assemble that ship in the future, when there is enough experience from the treatment of the first ship.

The pits were found intact and all pieces of the first ship carefully recovered. The ships are nowdays known as the "Cheops ships", "Khufu ships", "Solar ships" or "Cheops boats". They may have been the private ships of the pharaoh, buried in the pyramid.