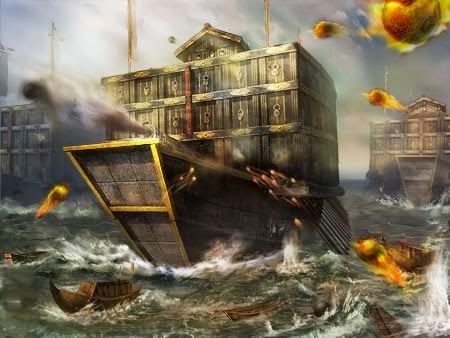 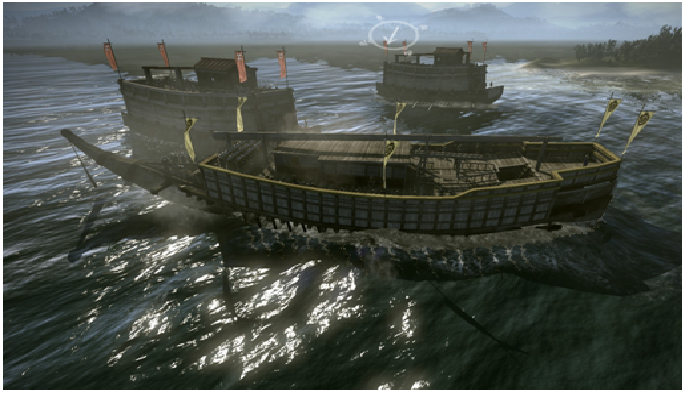 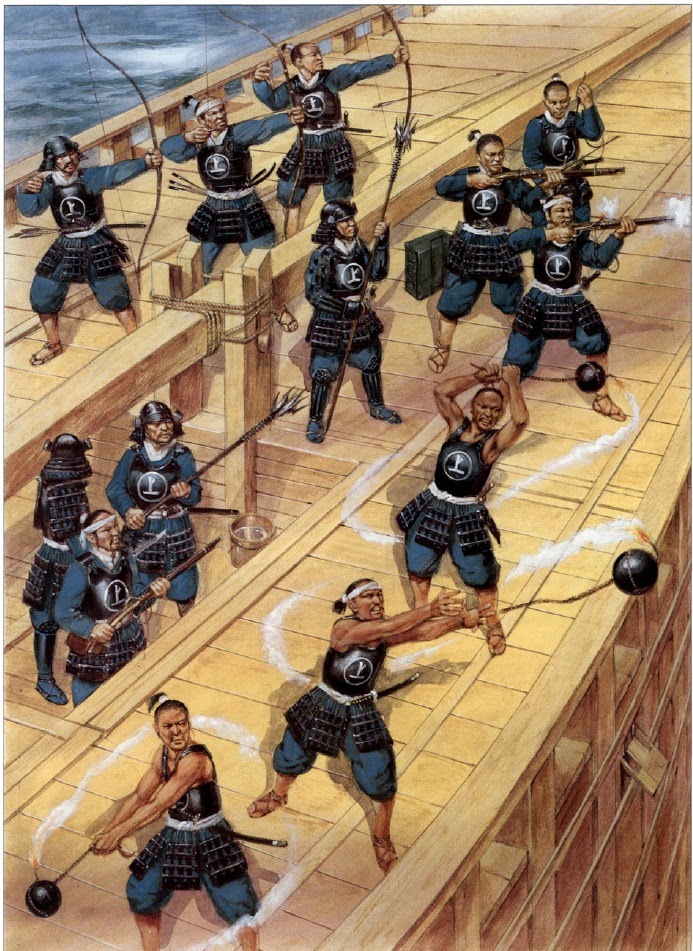 KAIZOKU OF THE MURAKAMI NAVY WITH FULL EQUIPMENT FOR SEA FIGHTING, 1576
This plate shows the kaizoku pirates of the Murakami navy at the height of their powers when they were in action against Oda Nobunaga at the first battle of Kizugawaguchi in 1576. They are more substantially dressed and armed than the wako who raid China and Korea. Their bodies are protected by simple okegawa-do-style armours as worn by the ashigaru (footsoldiers). The mon (family badge) of the Murakami is lacquered on to the breastplates and they also wear simple shirts and trousers, bare feet in straw sandals, although the energetic bomb hurlers have stripped right down. They are flinging horoku, which consisted of two iron hemispheres fastened together and wrapped round with layers of washi (Japanese paper) glued on to the outside surface. Gunpowder and numerous iron shards were held inside, reached by a fuse timed by its length, while a rope or cord was attached to the outside for throwing in the manner of an Olympic hammer thrower. The weapons used by their comrades include arquebuses and bows, together with the 'sleeve entangler', associated with the police of the Edo Period; a mass of spikes constituted the head of this polearm, and about 20cm (8in.) of its upper shaft was also covered with spikes.

The two Battles of Kizugawaguchi were fought during Oda Nobunaga's attempted sieges of the Ishiyama Hongan-ji in Osaka. The Hongan-ji was the primary fortress of the Ikkō-ikki, mobs of warrior monks, priests, and farmers who opposed Oda's rule. He ordered one of his admirals, Kuki Yoshitaka, to organize a blockade against the fleets of the Ikki's allies, who sought to supply the fortress and break the siege. Many of the ruling families of the neighboring provinces opposed Oda, chief among them the Mōri clan.

The first battle
In the first battle, in 1576, the Mōri defeated Kuki Yoshitaka's fleet, breaking the blockade and supplying the fortress. Both sides fought with firearms, a rather new development in Japanese warfare; but Mōri's experience and knowledge of naval tactics was ultimately the deciding factor.

The second battle
Two years later, the Ishiyama Hongan-ji was still under siege, and Oda's fleet, commanded once again by Kuki Yoshitaka, made another attempt to break the Mōri supply lines. Going against convention, Yoshitaka fought with six very large ō-adakebune ships, rather than a combination of small (kobaya), medium (sekibune), and large (adakebune) craft. Normally, adakebune were essentially wooden floating fortresses, covered in gun and bow emplacements. According to some accounts, it may be believed that these six were the first ironclads, and were built such that guns could not penetrate them. However, rather than true ironclads, made primarily or entirely of metal, these craft probably simply had limited iron plating in key locations.

Several Mōri vessels were burned and sunk, and Oda's fleet ultimately achieved victory. The supply lines were broken, and the Hongan-ji fell soon afterwards. However, during this battle an interesting flaw was discovered in the ō-adakebune design. As Mōri samurai rushed to board the large ship, all the defending warriors ran to that side of the deck, to defend themselves, and the ship capsized as its center of gravity shifted.

Yoshitaka went on to defeat the Mōri once more the following year.

Second Battle of Kizugawaguchi Part of the Sengoku period
Belligerents
Fleet loyal to Oda Nobunaga
Fleet of allies of Ikkō-ikki
Commanders
Kuki Yoshitaka
Unknown, most likely a member of the Mōri clan
Strength
Six ships
Unknown
Posted by Mitch Williamson at 12:19 AM