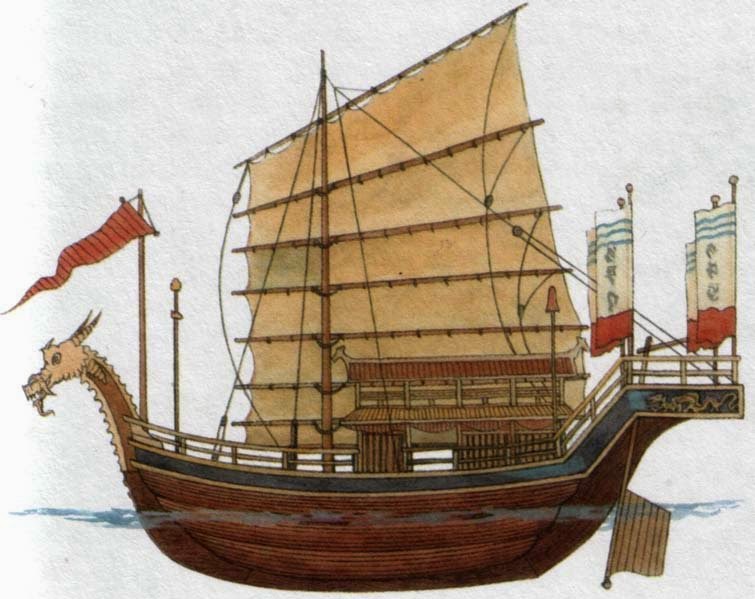 Japanese Junk
Japanese junks differed somewhat from the junks of China, since it was necessary to sail among the islands of Japanese archipelago where the large flat-bottomed Chinese vessels would find it difficult to maneuver in the rough seas. Similar ships to this one were equipped as warships and composed the fleet of the Mongol emperor of China Kublai-Khan. So in the 13th century a 1000 sea junks with 100 000 soldiers aboard were sent to invade the Japanese archipelago. If this fleet had not been destroyed by a powerful typhoons (Kamikaze-Divine Wind), then the history of these countries would have changed dramatically.

The Kamikaze (Japanese for divine wind), were a pair or series of typhoons that are said to have saved Japan from two Mongol fleets under Kublai Khan that attacked Japan in 1274 and again in 1281. The latter is said to have been the largest attempted naval invasion in history whose scale was only recently eclipsed in modern times by the D-Day invasion of allied forces into Normandy in 1944.

The first invasion devastated the Japanese. The battle took place on the beaches where the two forces met. The Mongols had several advantages; The Japanese were overwhelmed and began to retreat. Not knowing they had won, the Mongols feared the Japanese were coming back with reinforcements and also retreated.

During the time period between the first and second invasion, the Japanese built walls to protect themselves from future invaders.

Seven years later, the Mongols returned. They found themselves unable to find any suitable landing beaches due to the walls. The fleet stayed afloat for months as they depleted their supplies and searched for an area to land. After months of being exposed to the elements, the fleet was destroyed by a great typhoon. The Japanese called it Kamikaze. The Mongols never returned. The Japanese were saved by the walls they had built and nature's fury.

In popular Japanese myths at the time, the god Raijin was the god who turned the storms against the Mongols. Other variations say that the god Fūjin or Ryūjin caused the destructive kamikaze.

Recent research has found that other causes contributing to the invasion's failure included:
* Many of the ships were requisitioned river craft with flat bottoms and wobbly masts, and thus unstable in rough sea.
* Some of the ships had been poorly made, perhaps as the result of deliberate sabotage by Chinese shipbuilders who resented their Mongol conquerors.
Posted by Mitch Williamson at 10:10 PM