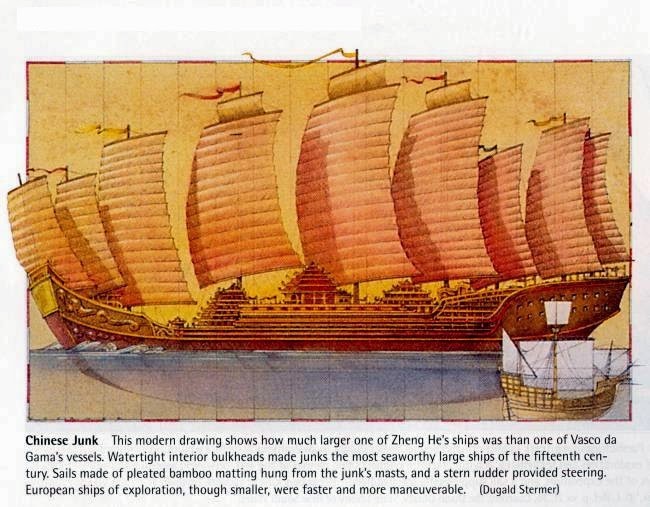 The Chinese sphere stretched from the Sea of Japan to the Straits of Malacca. China was culturally and economically dominant in the region and had the potential for naval mastery, a potential that was actually realized under the southern Sung dynasty (1127-1279), although we know little about the details. By the thirteenth century, as travellers Marco Polo and ibn- Battutah attested and nautical archaeologists have confirmed, junks engaged in long-distance trade were as stoutly built and as seaworthy as any ocean- going vessel afloat. But with few exceptions, after the Sung dynasty, China's rulers focused their attention on terrestrial affairs. Of critical importance, the mandarins (the Confucian literati responsible for day-to-day governance) were at best ambivalent about overseas trade, particularly when conducted by Chinese. After overthrowing the Sung dynasty, the Mongol Yuan dynasty (1260-1368) mobilized Chinese and Korean shipyards and mariners to mount massive invasions of Japan in 1274 and 1281. Both invasions failed, and in the ensuing years the Yuan became increasingly sinicized and turned their backs to the sea. Mandarin attitudes prevailed thereafter, save for a brief interlude under the first emperors of the Ming dynasty (1368-1644).

The Ming were an anomaly, a native dynasty founded by warrior kings who sought actively to expand China's boundaries by land and suzerainty by sea. They did so at sea by means of treasure fleets, so called because one of their main functions was to collect tribute in the form of ambassadors, precious metals, gems, exotic animals and other esoterica. Enormous in scope and competent in execution, these fleets sailed seven times between 1405 and 1434, under the eunuch admiral Cheng Ho, visiting Java and destinations as far afield as Ceylon, the Persian Gulf, the Red Sea and the Madagascar Channel. These fleets have acquired semi-legendary status and must therefore be put in perspective. The dimensions commonly given for the largest of Cheng Ho's ships, 450 feet long and 184 feet in breadth, are not only implausibly broad relative to length, but physically impossible, the result of erroneous interpolations by later Chinese authors and uncritical acceptance by western scholars. Still, they were impressive enough, sporting nine masts, measuring some 204 feet by 37 feet and displacing 1,000 to 1,100 tons.

Some contemporary European vessels were larger, for example Henry V of England's 'great ships' Jesus (1,500 tons) and Grace Dieu (2,100 tons), but whereas these ships were exceptional, dozens of treasure ships were produced to a standardized design. The 1405 fleet consisted of 62 large and 255 small vessels and carried 27,870 men. Except for the smaller 1407 to 1409 expedition, the rest were of similar magnitude. The administrative and logistical competence required to outfit, man and provision such fleets speaks for itself. Moreover, the treasure fleets were not pure exercises in peaceful diplomacy, but suppressed piracy in the Straits of Malacca ,and intervened militarily in dynastic struggles in Java and Ceylon. We know little about the armament of Cheng Ho's ships, but Ming warships of the 1390s are known to have carried cannon that were at least equal in size and power to contemporary European naval ordnance. More importantly, seagoing junks, in contrast to Arab dhows and Malay jukungs, had hulls that could have been modified to support batteries of heavy ordnance.

The treasure fleets were successful in expanding Chinese suzerainty for a time, but behind their success lay a dark reality, for the Ming emperors who launched them proclaimed a ban on private seaborne trade that forced the vast majority of Chinese deep-sea mariners into poverty, smuggling or piracy. The last loophole was closed in 1435, when the treasure fleets were banned. The ban was partially lifted in 1567, but by then the design of large, ocean-going war junks had been lost, a victim of the mandarins' suspicion of outside cultural influence. The Ming war fleet had wasted away and Japanese wako pirates, sailing in ships that were far inferior to those of Cheng Ho's fleets, had filled the vacuum, turning China's coastal districts into a depopulated wasteland.
Posted by Mitch Williamson at 4:40 PM