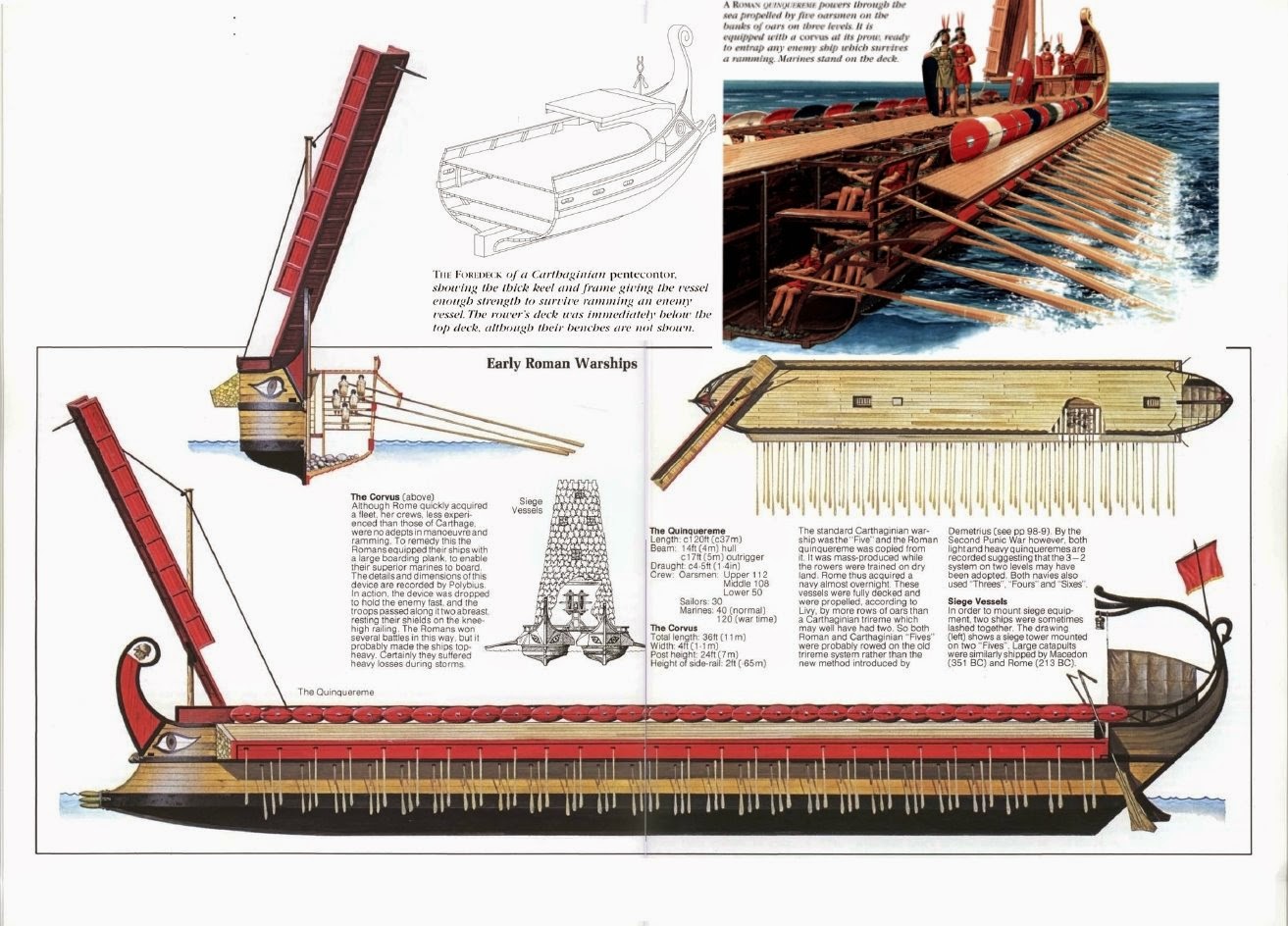 The First Punic War began when both Rome and Carthage answered a call for assistance from different factions within the same Sicilian community. Throughout the resulting twentythree- year conflict the fighting was to focus overwhelmingly on Sicily as each side attacked the other's allies and strongholds on the island. Although there was much land fighting, this was overwhelmingly a naval war, and all the decisive moves occurred at sea. Rome's first military expedition outside the Italian peninsula was also to be her first large-scale experience of war at sea.

The great naval battles of Greek history had been fought principally by triremes, galleys with three banks of oars with a single rower to each oar. By the third century the trireme (a 'three') had been outclassed by the quinquereme (a 'five'), but the precise nature of this ship remains obscure. Clearly it had something, probably rowers, at a ratio of five to three compared to the trireme, but it is not clear how these were deployed. There were two basic tactical options for all sizes of ancient warships. Either they attempted to grapple with an enemy ship and board it, relying on the crew's numbers or fighting quality to capture the ship in melee, or they tried to ram the enemy and pierce his hull or shear off his oars. Although galleys were usually fitted with a mast and sail, the wind was too uncertain an agent of motion to allow them to fight when they did not possess missile weapons capable of inflicting serious harm on the enemy. Mobility depended on a ship's rowers, and galleys were effectively constructed around these. In proportion to their size, galleys carried far larger crews than later sailing ships and nearly all of these men were rowers. Space was highly limited, especially so on a quinquereme which, despite their 40 per cent increase in crew, do not seem to have been much larger than triremes. The weight of the rowers provided much of a galley's ballast, making it unwise for any great number of them to leave their seats at the same time. There was also very little space available on a ship to carry provisions of food and water. The result was that not only was travel by sea uncomfortable, but very long, continuous journeys were simply impossible. A voyage of more than a few days between friendly ports was risky: If possible the galley was beached each night and the crew allowed to rest, but this was only practical when the shore was not hostile. Most naval battles throughout history have tended to occur relatively close to the shore, largely as a result of the real difficulty fleets had in locating each other in the vast expanse of ocean. In the ancient world this was an absolute necessity, simply because the fleets could not risk moving too far from the shore. Sicily provided the ideal theatre for a naval conflict because its numerous anchorages were within practical range of the fleets operating from home bases in Italy and North Africa.

Geography and the might of the Carthaginian navy meant that the conflict was likely to be dominated by sea-power, but at the beginning of the war Rome was not a naval power, largely because she had never needed to be in the past. She may have possessed a small number of ships, and some of her Italian allies certainly had their own navies, but they could not have hoped to form a serious rival to the Punic fleet, especially since it is possible that no state in Italy at that time possessed any quinqueremes. When in 261-260 BC the Romans decided to build a hundred quinqueremes, Polybius claims that they copied the design of a Carthaginian ship which had run aground and been captured earlier in the war. The story is one example of the pride the Romans took in their ability to copy the best weapons and tactics of their enemies, but may still be genuine. Polybius states that they trained the ships' crews while the fleet was under construction, building tiered benches on land to practise rowing. Yet even with this training, the new Roman fleet lacked the experience and skill of the well-drilled Carthaginian crews and the naval war did not start well for the Romans. The fleet's commander was surprised in harbour and all the seventeen ships with him were captured by a Punic squadron.

The tactics of ramming required skilful handling of a ship and the Romans may have realized that they could not match their opponents in this, as from the beginning of the war they were to rely on boarding the enem~ With this in mind they designed the 'Crow' (corvus), a boarding ramp fitted with a spike which stuck fast in an opponent's deck, locking the two ships together. Once grappled in this way no amount of skill on the part of the Carthaginian crew could break their ship free and the Roman legionaries swarmed across the bridge and settled the affair with their ferocity in hand-to-hand combat. The new device was tested when the massed fleets clashed off Mylae in north-eastern Sicily, 130 Carthaginian ships facing a slightly smaller number of Roman ones. The Carthaginian admiral, commanding the fleet in a ship that had once belonged to Pyrrhus, was confident in his 'crews' superiority and attacked aggressively. The Carthaginians did not realize the purpose of the corvi until they began to drop, the beaks spearing into their decks and grappling them fast. Thirty ships, including the flagship, were captured by the Roman infantry, who flooded over the ramps. Attempts to swing round and outflank the Romans were foiled when the Romans turned to face or swung their corvi round to drop over either side of the ship. The battle was a total success for the Romans with between thirty and fifty ships captured by the end of the da~ The prows (rostrata) of these prizes were cut off and sent to decorate the Speaker's platform in Rome, which in time gave it a new name.

In 256 BC the Romans repeated their success at the battle of Ecnomus, at which each side probably mustered well over 200 ships (Polybius gives the Carthaginian strength as 350 and the Roman as 330 which, if correct, would make this one of the largest naval battles in history). The Carthaginians had found no counter to the corvi, but in the next years few years the weather dealt Rome a series of severe blows when three fleets were wrecked in storms. Hundreds of ships were lost and the drowned numbered tens of thousands. Poor Roman seamanship may have been to blame, but it is also possible that the corvi's weight made the ships less seaworthy. Then at Drepana in 249 BC the Romans suffered their only defeat in a fleet action, a disaster blamed on impiety when the consul, Publius Claudius Pulcher, ignored the unfavourable auspices. When the chickens refused to eat (and so signify divine favour), he is said to have hurled them over the side, proclaiming that if they would not eat, then they would drink. These Roman disasters and Carthaginian exhaustion brought a lull, but in 242 BC the war was decided at sea when the Romans, having risked the creation of another fleet, smashed the last Punic fleet near the Aegates Islands. In the resulting peace treaty Carthage gave up both her fleet and all her possessions in Sicily.
Posted by Mitch Williamson at 11:03 PM