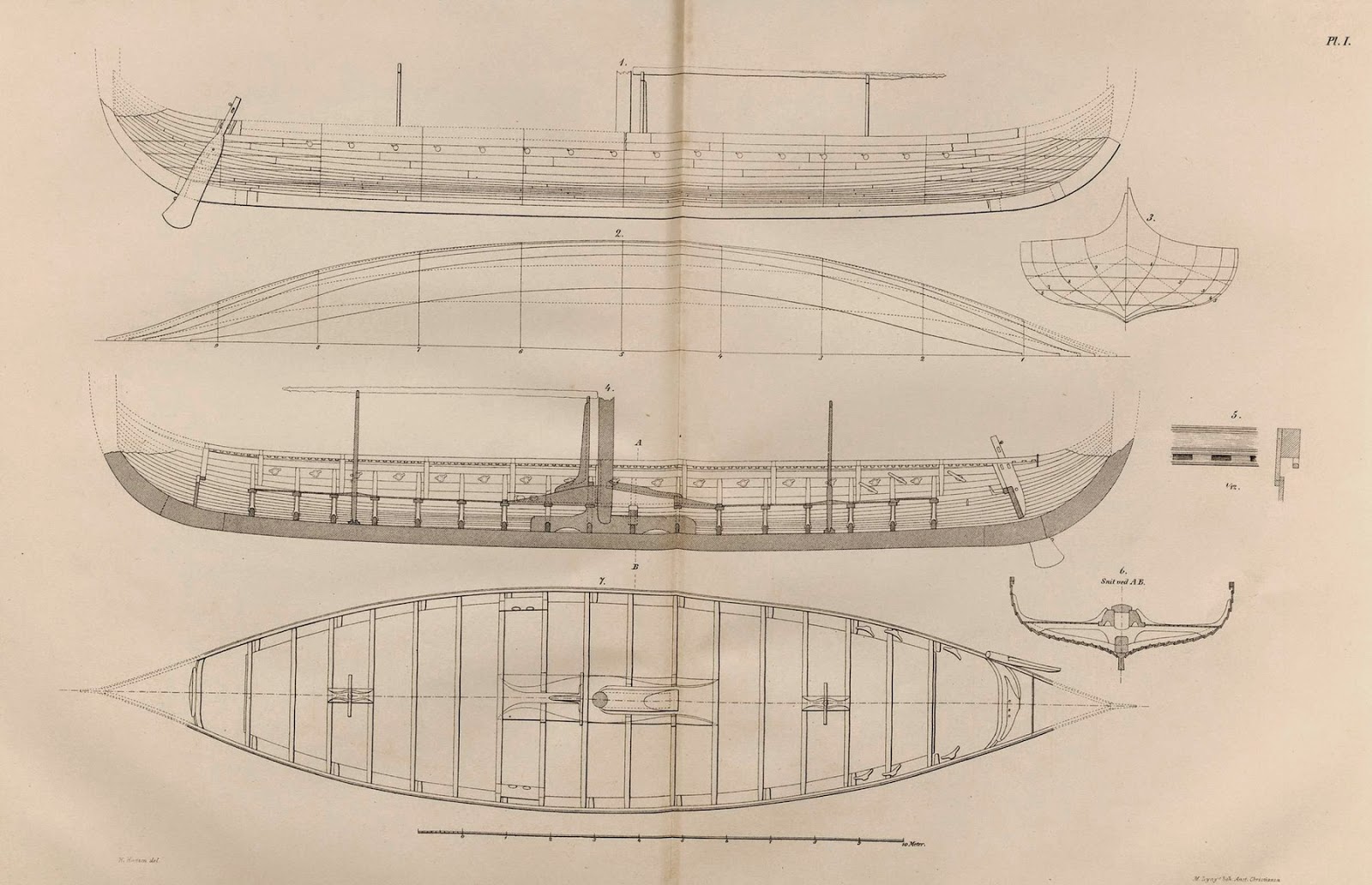 "So great, also, was the ornamentation of the ships, that the eyes of the beholders were dazzled, and to those looking from afar they seemed of flame rather than of wood. For if at any time the sun cast the splendour of its rays among them, the flashing of arms shone in one place, in another the flame of suspended shields. Gold shone on the prows, silver also flashed on the variously shaped ships. So great, in fact, was the magnificence of the fleet, that if its lord [Cnut] had desired to conquer any people, the ships alone would have terrified the enemy, before the warriors whom they carried joined battle at all. For who could look upon the lions of the foe, terrible with the brightness of gold, who upon the men of metal, menacing with golden face, who upon the dragons burning with pure gold, who upon the bulls on the ships threatening death, their horns shining with gold, without feeling any fear for the king of such a force?"


More representative of the Viking longship, at least in its number of oars, is the Gokstad Ship, with sixteen on a side. The finest and best preserved of the longships, it was excavated at Gokstad, near Oslo, in 1880. A thousand years before, the ship had served as a burial chamber, preserved under a barrow of impermeable blue clay. Seventy-six and a half feet long, seventeen and a half feet wide, and less than six and a half feet deep from the keel to the gunwale at midship, the keel, itself, was almost fifty-eight feet long. It is the length of the keel, in fact, that determined the size of such a ship. Constructed of a single piece of oak to ensure strength, there cannot have been too many trees that would have yielded straight timber much longer than that.


The remnants of thirty-two shields, alternately painted yellow and black, were found along each side, two for each oarport, which seems to indicate a crew of approximately the same number or possibly twice that if they rowed in shifts. Overlapping one another, the shields hung from a batten on the uppermost strake. Such a display presumably was ceremonial and decorative. Once under sail, the shields were at risk of being washed away and, while the ship was being rowed, they would have covered the oarports. The oarports were cut at the second strake of the ship, which permitted a higher freeboard than if the oars had been secured by oar locks on the gunwale and an advantage over the enemy.


There also were oars and spars, tubs and kegs for food and water, and even remnants of the woolen sail cloth, which often was interwoven to give a checkered or striped pattern. A rudder or steering board was affixed to the right side of the ship, its name providing the origin of the word "starboard." Curiously, there were no benches (thwarts) for the oarsmen, who probably sat on their sea-chests. There were found, however, the bones of a peacock, which must have seemed exotic indeed to these Norsemen.


The Gokstad ship was built around AD 900 and represents the finest expression of a technical achievement that already had been attained by the mid-eighth century and had begun long before. Writing eight hundred years earlier, Tacitus describes in Germania the Suiones (Svear), a tribe in Sweden, as being known for their love of wealth and the strength of their fleet. "The shape of their ships differs from the normal in having a prow at both ends, which is always ready to be put in to shore." (Much of this wealth was in gold solidi, one-ounce coins that were used by the Romans to pay mercenaries and from which the word "soldier" is derived.)


As the Gokstad ship is representative of the langskip, so the sturdy knörr (knarr) represents the hafskip (ocean ship). A merchant vessel, built for the transportation of cargo and livestock, it was shorter and broader in the beam than the longship (about fifty feet long and fifteen feet wide), with a deeper draft, and a higher freeboard to keep waves from washing over the side. Unlike the longship, which quickly could lower its mast, the knörr had a fixed mast and relied primarily on its sail. With ships such as these, the Vikings were the dominate sea power in the ninth and tenth centuries.