ROMAN CONTROL OF THE MEDITERRANEAN 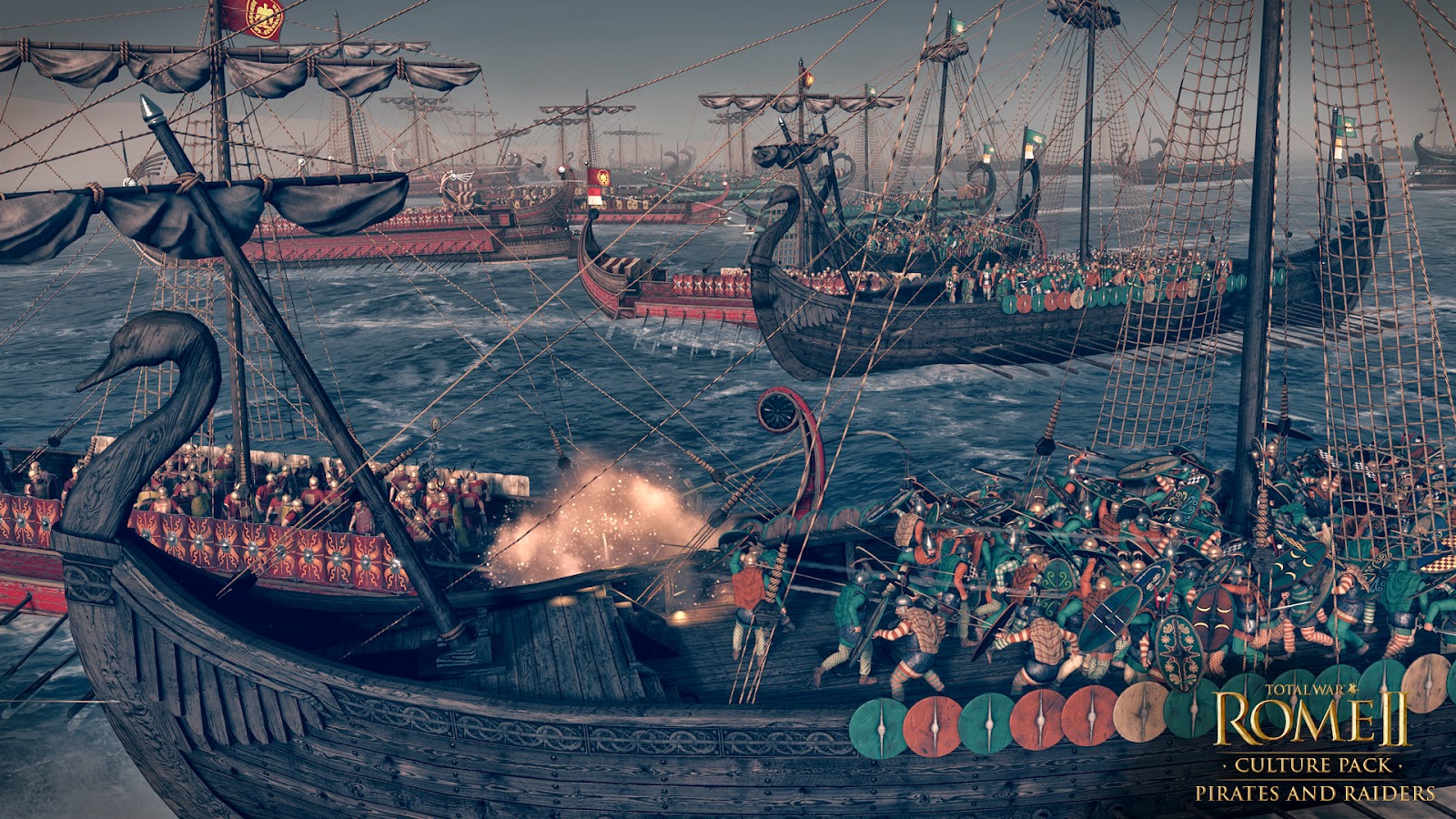 Pompey, ordered to clear the seas of pirates, had full authority over the entire Mediterranean and Black Seas, and all land within 80km (50 miles) of the sea. He raised 500 ships, 120,000 soldiers and 5000 cavalry. He then divided this force into 13 commands. The only area left (deliberately) unguarded was Cilicia. Pompey took a squadron of 60 ships and drove the pirates from Sicily, into the arms of another squadron. Then he swept down to North Africa, and completed the triangle by linking up with another legate off the coast of Sardinia, thus securing the three main grain-producing areas that served Rome. Pompey then swept across the Mediterranean from Spain to the east, defeating or driving pirates before him. The remnants duly gathered in Cilicia, where Pompey had planned a full assault by both land and sea. A few pirate strongholds were destroyed, and there was a final sea battle in the bay of Coracesium, but thanks to Pompey's clemency, most pirates surrendered easily.

The Romans used their fleet to good advantage in the conquest of Macedon in 168, then let it fall into decay. Instead, the senate relied on Greek subject states of the eastern Mediterranean for naval matters. Unfortunately for security in the Mediterranean, the decision to abandon the Roman fleet coincided with a Roman decision in 167 BC to curb the independence of Rhodes, an island city-state in the eastern Mediterranean. For over a century Rhodes had been a great mercantile centre, and trade was so important to her economy that she had equipped a major fleet to combat Mediterranean pirates. The Rhodians had played a widely-recognized role as the official policemen of the eastern Mediterranean; after Rhodes was devastated by an earthquake in 226 BC, all the Hellenistic kings had contributed timber to help them restore their ships; one ruler even gave 10 fully equipped quinqueremes to the city. But Roman policy undermined the Rhodian economy, and Rhodes no longer had money for an anti-pirate fleet.

Piracy was a plague. It was not simply a matter of individual ships preying on sea traffic. Instead, whole fleets of pirates were common again by the first century BC, raiding the coasts and often lending support to land forces in war. With the decline of Rhodes, the problem grew to mammoth proportions. Worst were the Cilician pirates, whose bases were on the rugged southern coast of Asia Minor. They eventually attracted so many fighters and ships that they organized themselves on naval lines with flotillas and whole fleets under the command of admirals. They also added warships, even triremes, to the smaller, swift ships – liburnians, which had two banks of oars, and hemiolas - that were handiest for piracy. It has been estimated that by the early first century BC, there were more than 1000 pirate ships operating all over the Mediterranean and the Black Sea. The pirates became bolder all the time. By the 70s BC, they were raiding Italy, carrying off noble Roman women for ransom. One pirate squadron even carried off two high Roman officials, along with their staffs. Another squadron attacked Rome's own port of Ostia, and sacked other cities. Cilician pirates also aided Rome's inveterate enemy Mithridates VI of Pontus (120-63) and, according to one later account, even made a treaty with Spartacus, the leader of the slave rebellion that shook Italy in the 70s. Although that deal, if it ever really existed, was betrayed by the pirates, clearly they were an enemy force which gravely affected the Roman Republic and its growing overseas empire. The last straw was when pirates started interfering with the grain fleet of Rome itself.

Finally, early in the year 67 BC, the Roman tribune Aulus Gabinius proposed a comprehensive campaign to sweep pirates from the sea. The senate opposed such an action almost unanimously, fearing the power that such a special command would give to a single individual in Rome's unstable political environment, especially since they knew that the likely candidate was the ambitious Gnaeus Pompeius Magnus, or Pompey the Great. Pompey was well on the way to achieving political dominance over Rome through his reputation as a military hero, and the threat of force from the soldiers who had served under him. He needed a spectacular role as 'saviour of Rome', and that is precisely what Gabinius arranged for him. The tribune bypassed the senate by presenting his anti-pirate proposal directly to the Roman popular assembly. The lex Gabinia (Gabinius' law), when passed, gave massive power to the person appointed: Pompey. He was granted a three-year appointment to clear the seas of pirates, with power to raise troops in all Roman provinces. He was allowed up to 25 legates working under him, and had full authority over the entire Mediterranean and Black Seas, as well as all land within 80km (50 miles) of the sea, along with a large budget to outfit a huge army and fleet.

Pompey had clearly begun planning well before passage of the lex Gabinia, and was able to jump immediately into action. According to Plutarch, Pompey raised 500 ships (from subject allies), 120,000 soldiers and 5000 cavalry. He then divided this force between himself and 15 legates, political appointees rather than his trusted military allies; obviously Pompey was using his naval command to increase his political capital. Pompey then divided the Mediterranean and Black Seas into 13 commands (keeping 2 legates serving directly under him), assigning a legate to each area with orders to patrol his own command by both sea and land, attack strong points, and prevent pirates· from entering or leaving his sector. The only area left unguarded was Cilicia. This was left as a gathering point for escaping pirates, so they could all be dealt with in a full-scale assault. Pompey himself started operations early in the spring, before the time considered safe for shipping. He took a squadron of 60 ships and drove the pirates from Sicily, into the arms of another squadron led by one of his legates. Then Pompey swept down to North Africa, and completed the triangle by linking up with another legate off the coast of Sardinia, driving or fighting pirates as they went. Thus he secured the three main grain-producing areas that served Rome, the justification for the campaign in the first place. It is clear that he wanted to look good in Italy.

With the grain supply secure and all legates in place, Pompey himself swept across the Mediterranean from Spain to the east with part of the fleet, defeating or driving pirates before him. The remnants duly gathered in Cilicia, where Pompey had planned a full assault by both land 244 and sea. He equipped his land forces with an elaborate siege train, which in the event was not needed. A few pirate strongholds were destroyed, and there was a final sea battle in the bay of Coracesium. But even that was not a hard fight. The pirates had nothing to fight for, since word had already spread of Pompey's clemency; instead of executing captured pirates, he offered them land in exchange for their ships. Pompey, for political reasons, needed quick victories. Most pirates had been driven to the profession by need and, hearing of Pompey's generous treatment, surrendered without a fight.
Posted by Mitch Williamson at 10:43 PM