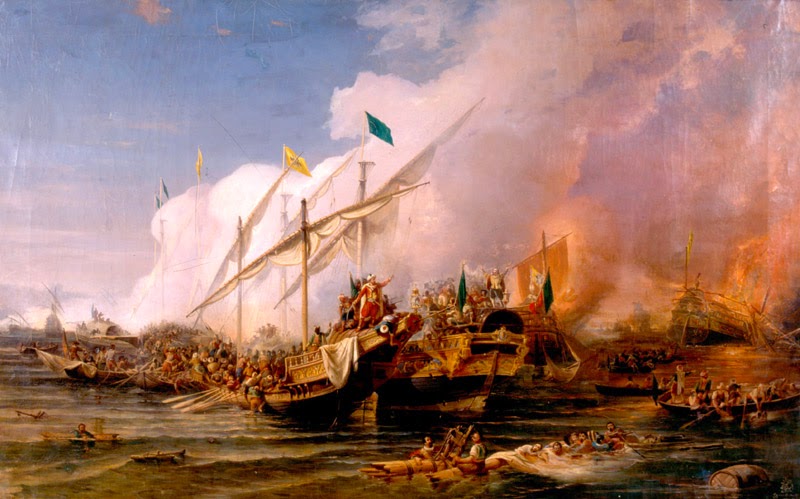 One formula for limiting military expenditure that had been successfully applied in the sixteenth century was to restrict central Ottoman treasury disbursements for the navy to a small proportion of general defence expenditure. Figures supplied by Ayn-i Ali for 1609 indicate that naval personnel accounted for only three per cent of manpower and four per cent of salary payments for the armed services borne by the central treasury. For a contemporary European context we learn that the cost to France of waging land wars against the Protestants in the 1620s represented roughly one-half of all state revenues from direct taxation. Because of the greater cost of equipment in naval wars, even apart from personnel considerations, land wars always represented the smaller burden. The French example, furthermore, represents an underestimation of real costs, since in foreign wars transport and provisioning costs were at much higher levels. That the Ottomans were able through much of the sixteenth century to wage a semi-continuous series of land wars without heavy reliance on exceptional levies and campaign contributions was due in part to the absence of competing resource commitments within the central fisc for the waging of sea battles. In the sixteenth century cost-containment in the naval sphere was achieved through the cooptation by the imperial fleet based in Istanbul of corsair freelancers whose fleets operated out of Algiers, Tunis and Tripoli.

The large armadas mobilized on both sides of the Mediterranean in the sixteenth century were the result of multi-party collaborative effort representing the combined capacity of privately-operated and state-subsidized fleets. By contrast, in the seventeenth century a growing share of the burden and expense of activism in the naval sphere was being borne by the state and taxpayers in the core provinces, especially western Anatolia. Under exceptional circumstances the sixteenth-century fleet mobilizations of strategic importance for the Ottomans warranted treasury subsidy, but the short-term effect of such subsidies was to annihilate all surpluses accumulated by the treasury and curtail the Ottomans’ readiness to mobilize quickly for land campaigns. As an example, it is estimated in contemporary Western sources that the cost to the Ottomans of outfitting the fleet sent to aid their French allies in 1543 was 1.2 million ducats, equivalent at current rates of exchange to 72 million akçes. Ottoman treasury figures for that period show regular income of 198.9 million akçes against expenditure of 112 millions, leaving a positive balance of 86.9 million akçes. But even under such comfortable balance of payments conditions as this, naval activity on any scale in successive years represented an unsustainable burden to the treasury. In the mid-seventeenth century a significant proportion of fleet expenses was met from off-budget sources and extraordinary levies.

Another dimension of state military expenditure which, like the maintaining of a credible naval deterrent, formed an indispensable part of overall provision, involved both initial and ongoing costs for fortress construction and repair.

A dispassionate assessment of the Ottomans’ situation – whether in the spheres of naval activism and military construction reviewed above or in terms of their general strategic position – reveals that even in the sixteenth and seventeenth centuries, regarded as an unsurpassed era of prosperity and imperial success, the Ottomans had to prioritize, make choices and use their resources carefully.

Both distance and other geographical conditions strongly favoured a pattern of Ottoman military involvement oriented to the Balkans and Trans-Danubia in preference to the zone beyond the Euphrates. The limits to Ottoman expansion overland followed a similar logic to that which limited the Ottomans’ involvement in wars on the sea in the sixteenth century. A study by Pryor focusing on the Ottomans’ presence in the Mediterranean and contingent factors influencing the level of their naval activity has shown conclusively how physical, geographical and environmental constraints imposed by tides, prevailing winds and other natural forces defined the role they were able to play. Although Ottoman intentions in the Mediterranean had been signalled by the conquest of Rhodes in 1522, it was only through a patient and gradual building up of supply bases, especially in the Aegean – a process continued in phases over the course of an entire century between the late 1460s and the fall of Chios in 1566 – that they were able to position themselves to give adequate support to fleet operations in the mid- Mediterranean. According to Pryor’s study, position was of equal importance to advanced technology and seamanship in determining the limits of the possible on the sea.

The supply challenge in land wars, because of the exponentially expanded scale of operations, was orders of magnitude greater. According to calculations recorded by Katib Chelebi, a typical Ottoman fleet in the mid-seventeenth century consisted of only 46 vessels (40 galleys and 6 maonas), whose crew complement was 15,800 men, of whom roughly two-thirds (10,500) were oarsmen, and the remainder (5,300) fighters. The numbers of armed soldiers and support staff committed to land wars needed to be in the order of four to five times greater than this. In addition, while at sea each ship tended to operate as a self-contained unit, whereas on land army forces shared a collective destiny. Stormy weather at sea affected the opposing fleets equally, and in extreme conditions forced both sides to retreat to their home bases without giving battle.
Posted by Mitch Williamson at 1:44 PM