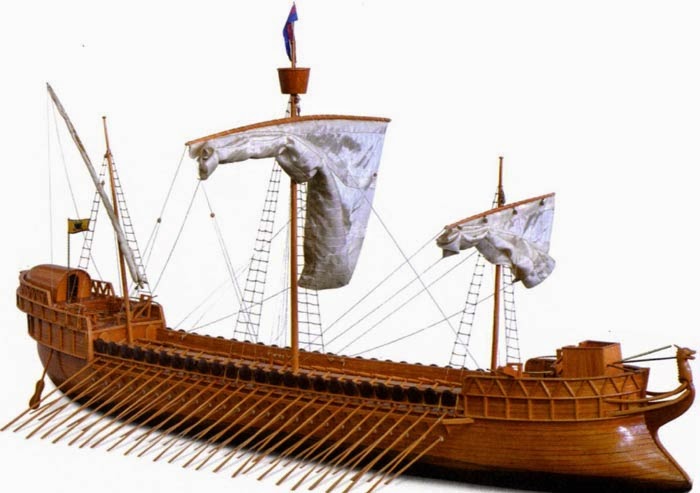 Land troops were supported by the Roman navy which was part of the army and not a separate service. Standing fleets of warships (for fighting) and merchantmen (for supply and transport of troops) were based throughout the empire. Individual squadrons were commanded by praefecti. In the west the major fleet was based at Ravenna, though there were other fleets in Italy, Gaul, Africa and Britain. In the east Constantinople became the major fleet base, while other smaller fleets were based in Egypt, Antioch and the Crete–Rhodes region. As part of the army naval expeditions were commanded by generals. In 324 Constantine’s fleet was commanded by his son Crispus, while Licinius’ was under an otherwise unknown Amandus. Later in the sixth century Belisarius reconquered Africa as the magister militum per Orientem.

Although fleets made a significant contribution to Roman military power, through defence of the Rhine and Danube frontiers by river flotillas and logistical support, there were very few campaigns which could be characterized as naval, primarily because Roman enemies rarely possessed significant fleets of their own. By far the most important naval encounters occurred in civil wars, the defeat of Licinius in the Bosphorus in 324 and the failure of Vitalian’s attempt on Constantinople in 515 when Greek fire was used to destroy his ships (Malalas 16.6 Thurn=403.5–406.8Dindorf ). In the 250s and 260s Gothic groups north of the Black Sea gained control of local fleets and rapidly became proficient at raiding, but their motley collection of fishing vessels, merchantmen, rafts and naval boats was always vulnerable to challenge by a proper fleet. Carausius and Allectus in Britain were a more formidable threat, since they had taken over the imperial Saxon shore fleet, and their suppression by Constantius in 293– 6 entailed a substantial naval expedition (Pan. Lat. 8.11–19). The Vandal capture of Carthage gave them control of Roman shipping and led to the first serious challenge to imperial domination of the Mediterranean since the PunicWars of the Republic, but their main activity was ravaging; even the massive expeditions dispatched from Constantinople in 468 and 533 passed off without confrontation at sea, the former being disrupted by fire ships at Syracuse and the latter arriving when the Vandal ships were busy off Sardinia. In the east it was feared that Persian access to the Black Sea would permit them to develop a fleet and threaten Constantinople (Procop. Wars 2.28.23), but when the Persians did eventually capture Phoenicia and Egypt in the seventh century they did not exploit what maritime resources fell into their hands: at Constantinople in 626 the Persians relied on Slav canoes to ferry them across the Bosphorus (Chron. Pasch. 722.14–723.12). The Slavs were effective raiders, but their light ships were no match for proper Roman vessels, as the engagement in the Golden Horn in 626 demonstrated (Theodore Syncellus 311.7–312.5; Georg. Pis. Bellum Avaricum 441–74). It was left to the Arabs to create a powerful fleet, in spite of the reluctance of the Caliph ‘Umar and their inexperience of maritime matters; the development was as striking as the emergence of the Roman navy during the First Punic War.

Posted by Mitch Williamson at 1:34 PM