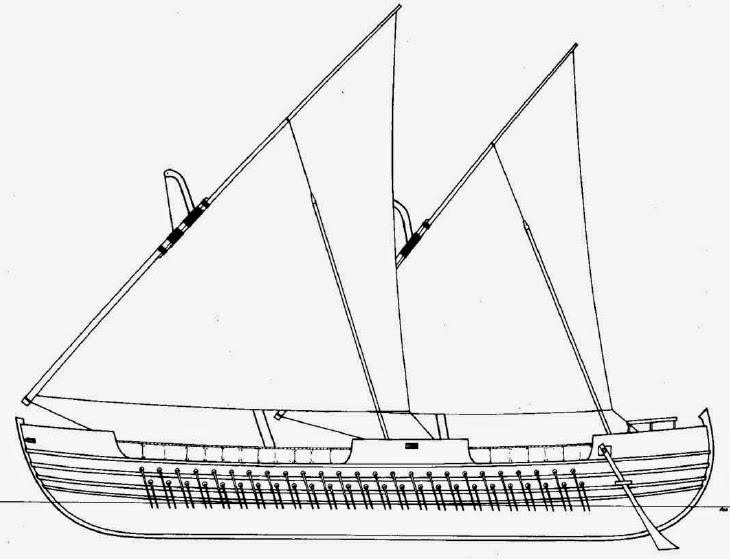 It is commonly believed that Mu‘awiya Ibn Abi Sufyan was the first planner and establisher of the Islamic navy. A careful examination of primary sources reveals that the first Islamic naval expedition in history took place in AH 17/638 CE during the caliphate of ‘Umar Ibn al-Khattab and was led by al-‘Ala Ibn al-Hadrami, governor of Bahrain, against Persia; it ended with a trapped Islamic army nearby Istakhr. Three years later, in 20/641, with the permission of ‘Umar, ‘Alqama Ibn Mujazziz crossed the Red Sea toward Abyssinia. The expedition was disastrous, and only a few ships returned safely to their home port. In view of these facts, one may justifiably feel that the reluctance of ‘Umar Ibn al-Khattab to permit his generals to embark on naval adventures did not result from religious considerations but from his unsuccessful and disastrous attempt against Abyssinia. However, the establishment of the Islamic navy in the Mediterranean Sea occurred during the reign of Uthman Ibn ‘Affan. It was through the joint efforts of ‘Abd Allah Ibn Abi Sarh, governor of Egypt, and Mu‘awiya of Syria that the first maritime expedition on Cyprus in 28/648–649 was launched.

The Islamic expansions in the East and the West were not destructive. Muslim authorities not only preserved all dockyards, naval bases, and systems in the former Byzantine and Persian provinces, but they also founded new maritime installations—arsenals and naval centers—along their maritime possessions. Along the Syro-Palestinian coast were Tarsus, Laodicea, Tripoli, Beirut, Tyre, ‘Asqalan, and, most importantly, ‘Akka (Acre), from which the first Islamic naval expedition was launched against Cyprus; Egypt had Alexandria, Rosetta, Damietta, Tinnis, Babylon, and Clysma on the Red Sea. As for North Africa and Spain, their most important naval centers were Barqa, al-Mahdiyya, Tunis, Bougie, Ténès, Badis, Ceuta, Cádiz, Algeciras, Seville, Málaga, Almuñécar, Pechina/Almeria, Cartagena, Alicante, Denia, Valancia, and Tortosa. Likewise, they maintained and developed several naval centers in strategic Mediterranean islands, such as the Balearic Islands, Sicily, Crete, and Pantelleria. As a protective measure and until Muslims had acquired supremacy over the sea, the headquarters of their fleets were located in inland waters; the Egyptian navy was in Babylon, whereas the Andalusian one was in Seville.

Amir al-bahr (admiral) was the supreme commander of the maritime frontiers and naval forces. The duties of the construction of warships and the selection of appropriate materials—timber for keels, planking, masts, yards, oars, oakum, metals, skins, cables, pitch and tar, and other fittings—were laid upon him and a team of inspectors, who had to ensure that shipwrights observed technical standards and did not use inferior or inadequate raw materials. Every ship passed a comprehensive technical inspection while it was still in the yard and during the journey to avoid unpleasant consequences. Among the types of warships built in the arsenals for the fighting fleets in the eastern and western basins of the Islamic Mediterranean were dromon, fattash, ghurab, harraqa, jafn, jariya, qarib, qarqur, qishr, shalandi, shini, tarida, and zawraq.

The responsibility of recruiting highly skilled sailors, patient artisans, brave warriors, alert spies, and physicians rested with the admiral and his chief commanders. Papyri from early Islamic Egypt show that the method of recruitment of sailors for the raiding fleets was compulsory; sailors were drawn from all provinces and included various classes of the population. In case of reluctance or fugitiveness, the local authorities had to pay the wages of men hired from another place. As for the fighting men, they were Arab emigrants and mawalis who settled in the Levantine, Egyptian, and North African frontiers. Only experienced crews and warriors with high morals who were faithful, professional, and fearless in the face of the enemy were taken onboard. Supplies for the ships’ human element included bread, butter, wine, oil, and salt.

Only a few Arabic manuals dealing with Islamic naval warfare have survived. Ibn Mankali’s handbooks, Al-Ahkam al-Mulukiyya wal-Dawabit al- Namusiyya fi Fann al-Qital fi al-Bahr and Al-Adilla al-Rasmiyya fi al-Ta‘abi al-Harbiyya, give great detail about naval preparedness and tactics. Because Islamic warships could be attacked with all kinds of weapons, their commanders were instructed to carry a large supply of spears, swords, crossbows and arrows, stones and catapults, venomous creatures sealed up in earthenware jars, and combustibles and Greek fire. Ibn Mankali describes how to be prepared against enemies, addressing such things as the following: exercises; prayers offered and speeches delivered before the actual combat; time, place, and disposition of enemy; strategic tactics and arrangement of warships; disposition of the flagship; and the flags to be used during the maritime battle for signaling purposes.