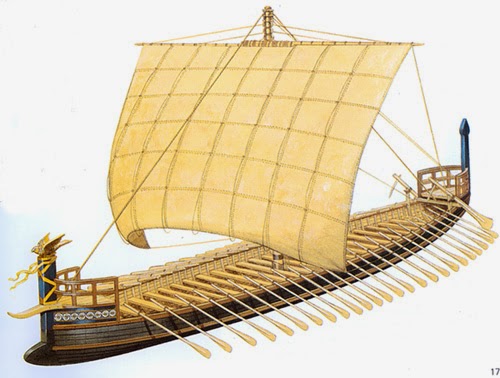 The ships which were the target of Hector's attack in the Iliad were lightly built, easily launched, easily beached and easily relaunched again. To protect the Greek ships from Trojan assault, Agamemnon was in favour of hurriedly rowing them out to sea. He was dissuaded by Odysseus, but the physical possibility of such an emergency manoeuvre was not in question. The Homeric ships carried a single sail on a yard suspended from halyards. The prow and the stern were decked, but the intervening space amidships was occupied by rowers’ benches. Odysseus, as a passenger in a Phaeacian vessel, slept in the stern, on the flat surface of the deck-not under it. There was no lower deck.

Already, in Homeric times, the construction of a merchantman differed from that of a war galley. References to merchant ships prove that they were comparatively broad built, and they apparently had a normal complement of 20 rowers. Fighting ships, which were also troopships, carried considerably more men. The rowers must, for the most part, have been fighters themselves, and there does not usually seem to have been any distinction between oarsmen and marines, such as existed on Greek warships in classical times. We learn that the rowers in Philoctetes' seven ships were all skilled archers -like their leader. On the other hand, Agamemnon provided ships for the contingent from Arcadia-an inland territory-since the Arcadians were not a seafaring people and did not possess ships of their own. The context suggests that the Arcadians were not called upon to do the rowing either.

Achilles sailed with 50 ships to Troy, and each ship carried 50 men. The Homeric narrative does not specify 50 rowers. Ships of the Boeotian contingent carried 120 men each. One cannot assume that all of them were rowers; if they were, they must have relieved each other at the oar. In any case, the number of rowers cannot always have coincided with a ship's full complement. Odysseus lost six men out of each of his ships in his fight with the Cicones, those old Thracian allies of Troy, not to mention other casualties incurred at later stages in his voyage. If the rowers were all fighting men, casualties were to be expected; thus, the same ship cannot always have been propelled by the same number of oars.

Warships seem to have been chiefly used for assaulting coastal cities and raiding littoral areas. There is no description of any naval engagement, properly speaking, between Greeks and Trojans. Sea fights, however, certainly took place in Homeric times, and the Greek ships were equipped for such fighting. When the Trojans attacked the ships on the beach, the Greeks met them with long, jointed boarding pikes, of a type used in sea fights. The pike wielded by Ajax was 22 cubits (about 36ft, 11m) long.

The Trojans do not seem to have maintained a standing navy of any importance. When Paris sailed for Greece in search of the world's most beautiful bride, a special shipbuilding programme was inaugurated for the purpose. Such at least was the story of the Cyclic poet. Presumably the coastal allies of the Trojans had navies to equal those of mainland Greece. At any rate, ships must have ferried their Thracian supporters across the Hellespont.
Posted by Mitch Williamson at 4:49 PM