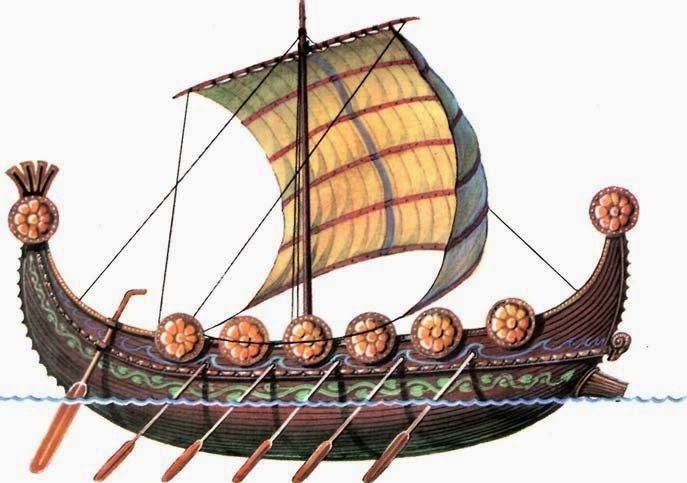 The images of Etruscan vessels are found on the tombstones of the central part of Italy (dated the 4th century B. C.). Resembling ancient Phoenician vessels by their forms these ships were differed by their sharper curve of posts and they had much in common with later vessels of North-European peoples. As in the Viking ships their oars passed through the holes in boards thus giving a possibility for more comfortable (lower) placement of rowers and for their defense by a high board. Short leather hoses closed slots between oars and a board. The vessel was steered by a single steering oar with a cross helm strengthened outside the starboard. The mast installed in the middle part of the ship carried a square sail with a yard. The upper band of planking was ornamented by a stylized image of a wave. The sternpost with two outside hanged shields was ended like a fish tail. The same shields were strengthened in the upper part of the stem and along the whole board. A figure in the form of a sheep head was installed on the bow part of the ship. It was a useful constructive element that defended the hull of the ship against the strike of an enemy's ram. The fighting metal ram was installed at the waterline level and was strengthened to the keel beam. Wide, high boarded, with a big sagging Etruscan vessels obtained sufficient seaworthiness for navigation in the Mediterranean Sea.
Posted by Mitch Williamson at 5:49 PM