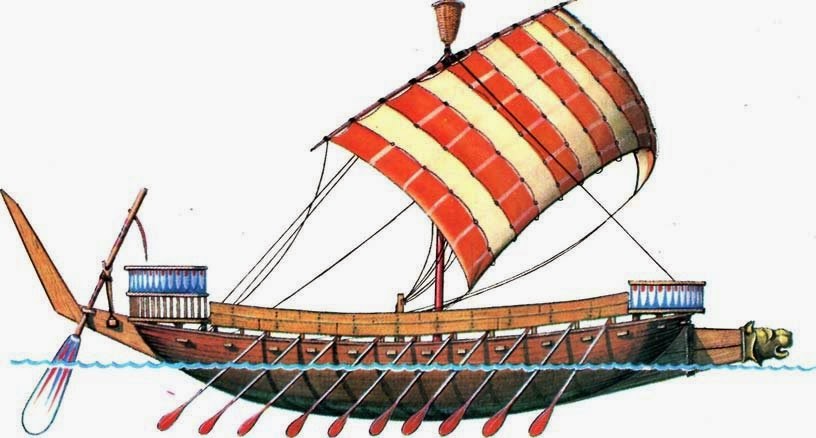 Egyptian warship circa 1200 BC

Unlike the later Greeks who developed special naval techniques (used also by Late Period Egypt), maritime battles by New Kingdom Egyptians and their opponents, the Sea Peoples, were fought by seaborne land troops. The Egyptian deployment of archers and the fact, that Egyptian ships could both be sailed and rowed, gave them a decisive advantage, despite the inferiority of the vessels themselves, which were at times quite sizable carrying up to two hundred and fifty soldiers.

But often the navy was little more than a means for getting land troops to where they were needed. Senusret III reached Nubia by ship


Master of the double cabinet, Sisatet, he saith: "I came to Abydos, together with the chief treasurer, Ikhernofret, to carve (a statue of) Osiris, lord of Abydos, when the King of Upper and Lower Egypt, Khekure (Sesostris III), living forever, journeyed, while overthrowing the wretched Kush, in the year 19."

Soldiers could also be transported at great speed to the Asiatic coast where they came upon the rebellious Canaanites without warning. Thutmose III employed this technique with great success.


Egypt lost its role of maritime superpower after the end of the New Kingdom. Phoenicians and Greeks became the main players in the Mediterranean. Continental powers like the Persians used these sea-faring nations to impose their control on the seas.

Egypt renewed its navy under Necho II, investing heavily in the development of biremes and was possibly among the inventors of the more powerful triremes in its attempt to fight off the Persians. It was unsuccessful and thereafter its fleet was at the behest of the foreign power controlling the country. Dozens of Egyptian ships were incorporated into the Persian fleet fighting the Greeks.

The last of the Ptolemies, Queen Cleopatra VII joined forces with the Roman Marc Anthony, in an attempt to preserve Egypt's independence. But her fleet was defeated at Actium, which spelled out the end of pharaonic Egypt.

Posted by Mitch Williamson at 8:04 PM