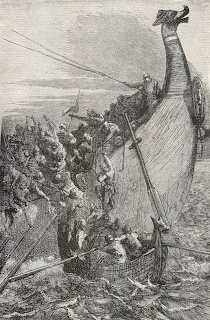 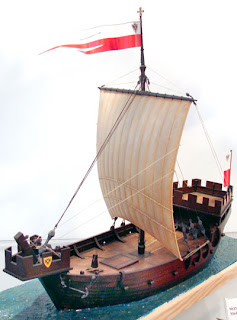 Appearance of the Cog (which is probably what the White Ship was an early example of) in the beginning of the XII Century was an important milestone in shipbuilding. Crusaders used them for their marches to the Holy Land, merchants of the Hanza union transported goods from Palestine and Africa to Europe. Cogs took part in all naval battles during the following three centuries

The year 1120 saw one of the most significant shipwrecks in English history; a tragedy that cost the lives of the flower of English nobility and would eventually plunge the nation into two decades of chaos and misrule – a period that has become known as The Anarchy. The heir to the throne of England and hundreds of scions of noble families perished when the White Ship, one of the most advanced vessels of the time, was lost with all hands. Its wreck and the potentially priceless cargo (in terms of historical and material value) it carried have never been located.

Between two kingdoms
Following the Norman Conquest of 1066, England was ruled by the dukes of Normandy. As overlords of two lands divided by the English Channel, it was routine for the Norman kings of England to shuttle back and forth between their dominions as they sought to preserve their territories on the Continent and in Britain. In 1120, Henry I, third of the Norman kings of England and youngest son of William the Conqueror, had been forced to travel to Normandy to confront the King of France, Louis VI. Accompanying him was his heir and only legitimate son, 17-yearold William Adelin. ‘Adelin’ is a latter-day rendering of ‘Atheling’ (the Saxon term for king) – he was named William the Atheling to show how the royal houses of the Saxons and Normans were unified in his person.
Henry had successfully resolved his dispute with Louis, gaining recognition for his son as the de facto Duke of Normandy, and was returning to England via the Norman port of Barfleur, from where his father had embarked for the invasion of England less than 60 years previously. The mood of the party was festive, especially since young William was habitually accompanied by a kind of ‘youth court’ – a youthful mirror version of his father’s court, which included many of the most important heirs and offspring of the noble houses of England and Normandy. With the party were his own half-brother and sister – Henry I was the most prolific father of illegitimate children in the history of the English monarchy. Despite this, William was his only legitimate son (one of only two legitimate children), and was therefore absolutely central to Henry’s dynastic ambitions.

Le Blanche Nef
On 25 November Henry was preparing to embark at Barfleur when he was approached by Thomas FitzStephen, master of the Blanche Nef, or White Ship, a fine new vessel of the highest specifications. FitzStephen’s father Airard had captained the Mora, the flagship of William the Conqueror’s invasion fleet, and now he himself begged William’s son for the honour of bearing him across the Channel in his splendid ship. Henry declined, as his own travel arrangements were already well in hand, but suggested that FitzStephen could carry his son, William Adelin, and his company. Henry boarded his own ship and departed not long afterwards, safely making the passage back to England.
Meanwhile William and his companions were feasting and drinking prodigiously, and their own departure was delayed while all the available casks of wine in port were loaded onto the White Ship. Once aboard, the partying continued, with the captain and crew apparently joining in. The company grew so inebriated that when a party of clerics led by the Bishop of Coutance arrived they were driven off with howls of derision. At least one of the passengers disembarked at this time: Stephen of Blois – possibly as a result of an attack of diarrhoea, or possibly because of an attack of common sense given the carryings on. It was a decision that would have fateful consequences.

Disaster strikes
By the time the White Ship was ready to depart everyone aboard was roaring drunk and night had fallen. On board were around 300 people, including 140 noblemen and at least 18 noblewomen. In relative terms, the Channel crossing was not especially dangerous – Henry had done it many times, while his father had made the crossing 17 times as king. But in the 12th century naval technology was still crude, and any sea journey was dangerous, particularly with a drunken crew, captain and pilot. To make matters worse, young William was keen to catch up with his father and get home first, and insisted that FitzStephen take the quickest route home.

This was to prove fatal. The correct route to take out of Barfleur harbour was to the south, avoiding dangerous shoals, after which the vessel would swing north towards England. The ship’s drunken pilot tried to cut corners by heading directly north, but succeeded only in driving the ship onto a rock called the Quilleboeuf, about 2.4 kilometres (1.5 miles) out of the harbour.

The ship began to sink, but all was not lost for William. He was quickly hustled aboard the only ‘lifeboat’, but as he was rowed to safety he heard the piteous cries of his half-sister, Matilda, Countess of Peche, imploring him not to abandon her. William ordered the boat to turn back, but as it neared the sinking ship it was overwhelmed by the number of people who tried to climb aboard and it too was lost.

This at least was the tale told by a butcher of Rouen named Berthold, who had only gone aboard to chase up a debt. He clung to one of the masts that projected above the waves, and was rescued the next morning. He was the sole survivor: few people of that era could swim, and in the dark, amidst the waves and strong currents, a watery grave was inevitable. When the news reached England none of the barons or high officers of the court dared to tell the king; it was left to a child to tell him the terrible tidings. It is said that he fainted away, and that he never smiled again.

The lost generation
The impact on the world of power politics in north-western Europe must have been tremendous, not to mention the personal toll on bereaved parents. The feeling that might have been prevalent is well captured by Winston Churchill in his account of the disaster in A History of the English Speaking People:

Two men remained afloat, the ship’s butcher and a knight. ‘Where is the Prince?’ asked the knight above the waves. ‘All are drowned,’ replied the butcher. ‘Then,’ said the knight, ‘all is lost for England,’ and threw up his hands [thereby casting himself into the waves].

The disaster has been likened to the sinking of the Titanic, which carried many rich and important people and had a colossal impact on Edwardian Britain. A more modern parallel might be the Thames’ Marchioness disaster of 1989.

For 12th-century England the sinking of the White Ship was to have grim consequences. Despite his extra-marital fecundity, Henry was unable to produce another legitimate male heir. Although he forced his barons to swear allegiance to his legitimate daughter, also called Matilda, the idea of a female ruler simply would not wash with the medieval mindset. When Henry died in 1135 most of the English barons promptly ignored their oaths and acclaimed Stephen of Blois, Matilda’s cousin and the same man who had so fortuitously stepped off the White Ship before it sailed to disaster, as king. Matilda was able to rally some support and attempted to reclaim the crown, plunging the country into nearly 20 years of civil war. It was a lawless and unstable time, when, in the memorable words of the contemporary Peterborough Chronicle, ‘Crist and alle his sayntes slept.’

12th-century treasure trove
The wreck of the White Ship represents a potential gold mine of archaeological and material significance. William Adelin and his party would have been richly caparisoned and loaded with jewels. He would probably have been accompanied by a considerable treasury of plates, goblets and other loot. Discovering this today would amount to a unique record of courtly life in the early 12th century. The ship itself would also be of tremendous importance. As the cutting edge of naval technology it could reveal fascinating insights into the evolution of ship-building, from the longships used by William the Conqueror to the medieval galleons with their high fore and rear castles.
The real issue, however, is whether there might be anything of the wreck or its contents left. Some, if not most, of the treasure aboard was probably salvaged at the time. The strong currents and tides in the area may well have washed away much of the rest. It is known, for instance, that many of the bodies were swept away to be cast ashore along the coast of Normandy for weeks afterwards. Possibly the same forces may have done considerable damage to the wreck, while shipworms and other aquatic organisms would have reduced the wooden parts of the ship unless it was quickly covered in preserving silt.

In other words, the prospects for significant salvage are not great, but the potential archaeological interest makes even a slim chance worth pursuing. Despite this, and despite the apparent agreement of all sources that it is known where the ship was wrecked, there is no record of anyone having mounted a search or exploratory dive. The local conditions would make such an undertaking difficult and perhaps dangerous, but with modern technology such as side-scan sonar and ROVs it is worth at least a preliminary investigation. Perhaps, lying in a sandy hollow beneath a sheltering rock, the bejewelled bones of William Adelin himself await discovery.