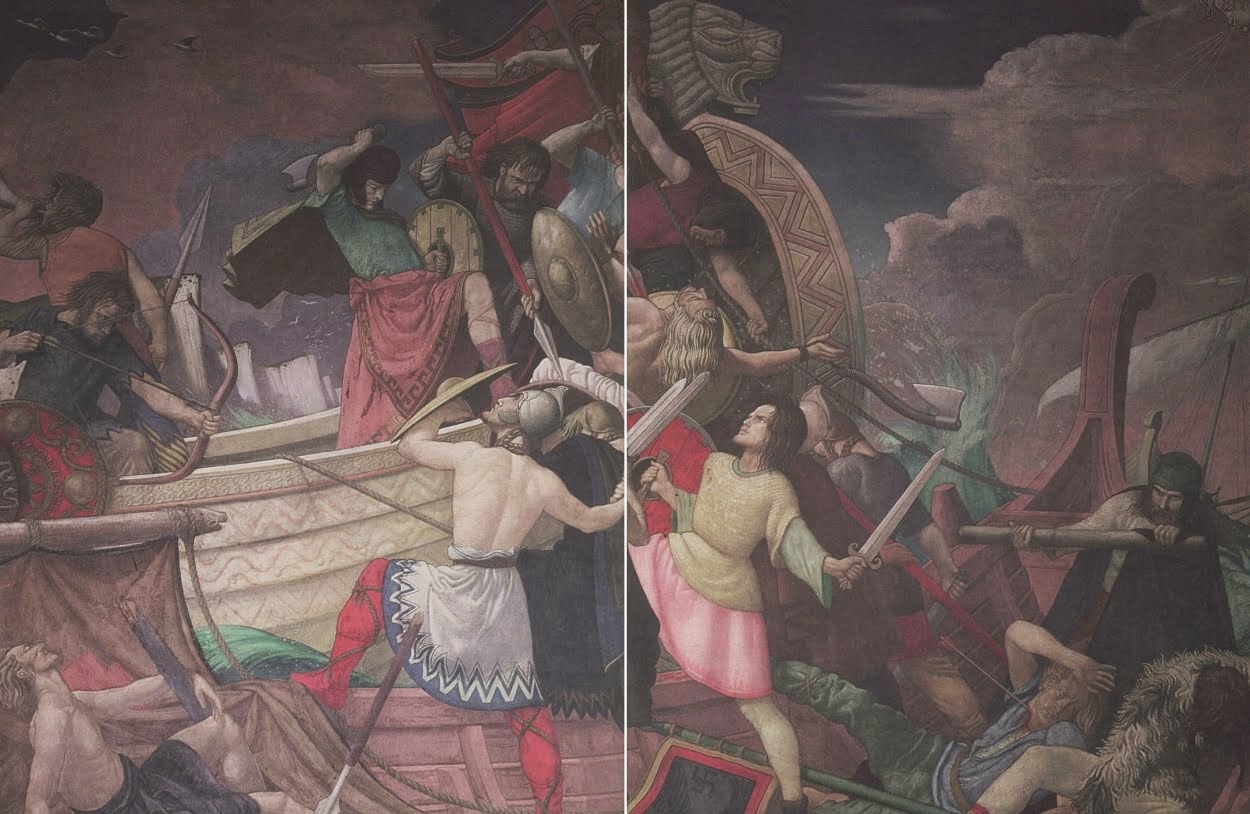 The first recorded battle in British waters took place in 719 as part of a civil war between the ruling Scottish families of the time, the Dalriata. This would have been just one of many taking place around the island, with fighting generally consisting of boarding the opposition’s boats and killing their crew. One naval engagement was certainly fought under Aethelwulf in 851(at “Acleah”, probably Ockley or Oakley in Surrey), and earlier ones, possibly in 833 and 840.

Despite the prevalence of this form of warfare, no proper navy existed anywhere in Britain until the reign of Alfred the Great, the Saxon king of Wessex who ruled from 871 to 901.

Alfred’s reign came at a time when there were increasing raids on the country by the Danes1. The invaders would sail up estuaries or approach the coast in their longboats and then come ashore. Alfred responded to the threat by constructing a fleet of large longboats, each of which could carry a hundred men, to meet and fight off the invaders before they landed. This navy’s first battle was against four Danish ships in the Stour Estuary in 882, but it was his victory over the invading forces in the Thames estuary and off the coast of Essex in 897 that won Alfred the epithet ‘the Great’. King Alfred is now considered to be, in a way, the founder of the Royal Navy.
Alfred’s successes were partly due to his building up the West Saxon navy into a fleet that could not only meet the Danes on equal terms, but defeat them in battle. According to the Chronicle of 896, when the enemy attacked the south coast of Wessex “with the warships which they had built many years before,” Alfred “bade build long ships against the Danish warships: they were nearly twice as long as the others: some had sixty oars, some more: they were both swifter and steadier and higher than the others. They were built neither on the Frisian pattern nor on the Danish, but as it seemed to the king that they might be most serviceable.” The Chronicle also records one of his victories in 882, though he was later defeated by a large Danish force of the mouth of the River Stour. Alfred also fortified the key English towns.

After a long series of seaborne raids and the receipt of many tributes from the English kings, the Danes finally decided to invade England in August, 1013. Sweyn Forkbeard mounted a successful attack on the naval and ground forces of Æthelred the Unready, but died shortly after in 1014. Sweyn’s son Canute returned with another fleet the following year and forced Æthelred into joint rule of England. Canute eventually took over upon Æthelred’s death. With a Viking in charge, the navy grew into an almost professional force, but it would be the largest the country would see for the next half a century.

Upon the death of his Danish half-brother Harthacanute in 1042, Edward the Confessor became king and the monarchy was once again restored to the Saxons. However, great problems arose as Edward abolished the navy (a permanent nucleus of warships previously maintained) during his reign and then died childless in early 1066, leaving the way open for the invasions leading ultimately to the Battle of Hastings and the deposition of Harold Godwinson by the Norman invader William I.

Williams’s navy was essentially a transport fleet while the Saxon navy was a battle fleet. At Æthelreds institution of shipsokes it can be extrapolated to 200 ships (Abels). Even a fraction of that number would rip a transport fleet to pieces. A warship could easily overtake and outmaneuver a heavily loaded sailing ship.

Why do you think Harold had the fleet out all summer 1066?
Posted by Mitch Williamson at 5:42 PM