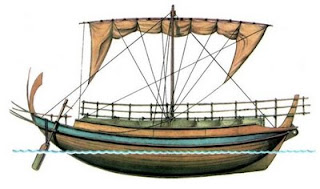 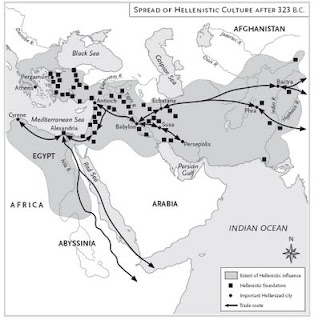 Ptolemy, who had accompanied Alexander all the way to the Indus River and back, took up Alexander’s idea of an expedition to Arabia. During his reign (323–285 B.C.), he sponsored an expedition under an admiral Philo, who sailed down along the Africa side of the Arabian Sea. Philo did not discover any new lands, but following his return the Egyptians under Ptolemy began to import elephants and ivory from Africa south of Egypt. Ptolemy I’s son and successor, Ptolemy II Philadelphus, established trading ports along the Red Sea, opened up trade with Yemen and Somalia, and sent expeditions that explored the coast of the Horn of Africa. Subsequent members of the Ptolemaic Dynasty, as these rulers of Egypt are known, sent still more expeditions to this region.

Admittedly, these expeditions were more concerned with trade, but each contact increased the store of knowledge of these little known locales. One of the most ambitious explorers of this era was a man who seemed to have combined commercial goals with sheer curiosity, Eudoxus of Cyszicus, a city in northwest Turkey. The adventures of Eudoxus are known only through the account in Strabo, the Greek geographer and historian (ca. 63 B.C.–ca. A.D. 24), who in turn was simply repeating the account of Posidonius (ca. 135–50 B.C.), another Greek-Roman historian. Eudoxus’s first expedition took place under Ptolemy VIII Euergetes II, who ruled the kingdom from 146 to 111 B.C. As the story went, “an Indian happened to be brought to the king by the guards of the Arabian [Gulf], who said they found him cast ashore alone and half dead, but who he was and whence he came they did not know because they could not understand his language.” After the Indian was taught Greek, “he promised to be a guide on a voyage to India for men chosen by the king.” Eudoxus is among those who went but when he returned loaded with precious stones and other valuable objects, Euergetes took all (or most of) his cargo. When Euergetes died, his widow sponsored another expedition to India; again, Eudoxus returned with valuable goods,again, the new king, seized all (or most all) of his cargo.

One would think that Eudoxus would quit at that, but while returning on that second voyage, he had been blown ashore on the east coast of Africa. Not having any notion of how large Africa was, he decided to sail around it and head straight for India, thus avoiding the Ptolemies—by heading first for its west (Atlantic) coast. He fitted out a ship and sailed across the Mediterranean, along the way taking on all kinds of cargo expected to trade in Africa and India, “and also physicians. . . . and carpenters besides.” Sailing through the Pillars of Hercules, he rounded the northwest shoulder of Africa, but before long his ship ran aground and was wrecked. He built a new ship and sailed a bit farther, but then turned back, intending to make a new voyage in a larger ship. In fact, Eudoxus probably had gone only slightly south of Morocco.

On his way back “he saw and noted down a well-watered and well-wooded but unpeopled island”—possibly one of the Canaries, possibly one of the Madeiras. After several adventures in northwest Africa, he made his way back to Spain, built two more ships, and organized yet another expedition with the goal of reaching India. Even Strabo remarks: “How was it that [Eudoxus] did not fear. . . . to sail again.” In any case, he sailed off once more into the Atlantic and down the west coast of Africa—and was never heard of again. Although some scholars question just how much of Eudoxus’s story is true, others accept it and regard Eudoxus as having earned a place in the history of exploration.

Posted by Mitch Williamson at 6:58 PM