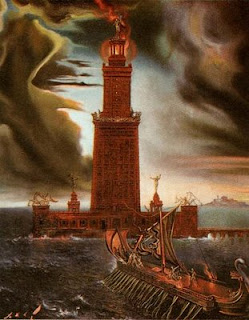 Taking the name of the long narrow island on which it stood, the Pharos of Alexandria was the most famous lighthouse of antiquity. Situated on a high mound at the end of a long peninsula, 3 miles (5 kilometers) from the city, it was a technological marvel and formed the prototype of the modern lighthouse. Since the sixth century a.d. (when it replaced the walls of Babylon) it has been listed among the seven wonders of the ancient world.

In 323 b.c. Alexander the Great died in Babylon, leaving no heir. Forty years of conflict followed as his generals fought for control of the vast Macedonian Empire. By 280 b.c. three major dynasties emerged: the Seleucids in Asia, Asia Minor, and Palestine; the Antigonids in Macedonia and Greece; and the Ptolemies in Egypt, the wealthiest and most enduring of all, who would reach their peak under Ptolemy II Philadelphos (reigned 285–246 b.c.). His capital was the grand city of Alexandria, designed by Dinocrates, personal architect to Alexander. Around 290 b.c., because of the dangerous sandbanks in the approaches to Alexandria’s harbor, Ptolemy I Soter initiated plans for a lighthouse. The work was incomplete when he died five years later. In 281 his son Ptolemy II Philadelphos commissioned the engineer Sostratus of Cnidus to build a great lighthouse on the eastern point of the island of Pharos, reached across a causeway named the Heptastadion. There is a tradition that structural and other calculations were made at the famous Alexandrian library.

Hellenistic accounts like those of Strabo and Pliny the Elder describe a tower faced with glistening white marble, crowned with a bronze mirror whose reflection of the sun could be seen 35 miles (56 kilometers) off shore. Apocryphal accounts claim the mirror was also a secret weapon used to burn enemy ships at sea. Indeed, most descriptions are sketchy, and popular images of the Pharos have been based on an interpretation of coins, terra-cottas, and mosaics published by Herman Thiersch in 1909. The most detailed description of the Pharos was made in 1166 by the Arab traveler Abou-Haggag Al-Andaloussi (to whom Thiersch did not have access), portraying a structure composed of three battered tiers: the lowest was square, 183 feet (56 meters) high, with a cylindrical core; the middle was a 90-foot-high (27.5-meter) octagon with a side length of 60 feet (18.3 meters); and the third was a cylinder 24 feet (7.3 meters) in height. There are few accounts of the interior of the great tower, except to say that it had many rooms and corridors. Fuel for the nightly bonfire was mechanically lifted through an internal shaft. The fire could be seen for about 100 miles (160 kilometers).

Including the foundation pedestal, the lighthouse soared to about 384 feet (117 meters). A wide spiral ramp gave access to the top, where there was a huge statue, possibly representing either Alexander the Great or Ptolemy I Soter in the role of Helios, the sun god. Some later accounts identify the figure as Poseidon, but more recent scholarship suggests it was Zeus Soter (Zeus the Savior). Still others believe there were statues of Castor and Pollux. Whatever its subject matter, the sculpture took the total height above 440 feet (135 meters), about as high as a forty-story office building. The Pharos was the second-tallest building in the world until the Eiffel Tower was constructed 2,000 years later. The monument was dedicated to Ptolemy Soter and his wife Berenice, and an inscription read, “Sostratus, the son of Dexiphanes, the Cnidian, dedicated this to the Savior Gods, on behalf of those who sail the seas.”

The Pharos served the mariners of the Mediterranean for about 1,500 years. In a.d. 642, the Arabs conquered Egypt and moved their capital to Cairo. In 796 the upper story of the lighthouse collapsed. Later, Sultan Ibn Touloun (reigned 868–884) built a mosque on the partly ruined tower. In the middle of the tenth century, an earthquake shook Alexandria and caused another 72 feet (22 meters) of masonry to fall. Despite frequent and sometimes extensive repairs being undertaken by the Arabs, earthquakes continued to have a cumulative effect: no fewer than twenty between 1303 and 1323 meant that the Pharos finally toppled some time before 1349. By then Al-Malik-an-Nasir had begun to build a similar lighthouse beside it but the project was halted at his death. Around 1480 the Egyptian Mameluke Sultan Qait Bey built a fortress over its ruins, using its stones for walls.

In the early 1990s the Egyptian government began building a breakwater to protect the fortress from storms. The project was postponed while archeologists from the Egyptian Supreme Council of Antiquities and the French Centre d’Études Alexandrines searched the harbor. Since 1996 they have found over 2,000 objects, columns, capitals, thirty sphinxes, and—most significantly—two colossal statues (one of Ptolemy I and another of a female torso) scattered over more than 5 acres (2 hectares) of the seabed near Alexandria. It is believed that the finds include the ruins of the fabled Pharos.
In September 1998 the U.S.$70 million Alexandria 21st Century Project was announced by the Fondation Internationale Pierre Cardin, claiming the support of UNESCO and proposing to build a 475-foot-high (145-meter) glass-covered concrete lighthouse on the site of the original Pharos. Happily, it came to very little.