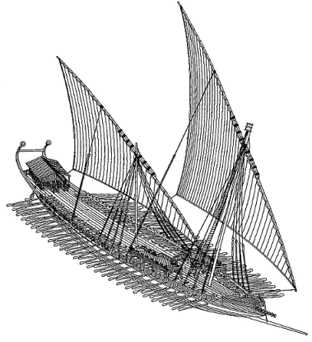 This is from HISTORY AND ARCHAEOLOGY OF THE SHIP - LECTURE NOTES, Undergraduate Teaching Materials originally compiled by John Illsley, former Lecturer in Medieval History, School of History and Welsh History University of Wales, Bangor

“The Roman trireme, together with the Liburnian, dominated the Mediterranean until the last stages of the Roman Empire but the continuing trend was for Roman ships, both galleys and cargo ships, to become lighter. In 323 AD the Emperor Constantine defeated a fleet of 350 triremes of the Eastern Emperor Licinius with a fleet of 200 liburnians, smaller and lighter than Roman triremes. The fifth century historian Zozimus identified Constantine’s Liburnians as triacontors, descendants of the thirty oared open galleys of the early first millennium Greeks, though Morrison suggests that he actually means pentecontors, which in turn means Liburnians (Long ships and Round Ships p50). Naval warfare had thus returned full circle to an emphasis on speed and manoeuvrability, though not necessarily for ramming. The later Romans reverted to the small galleys with single oarsmen rowing on one bank, almost exactly analogous to the Greek galleys of one thousand years earlier. The reasons for this development may have more to do with politics and economics than with advances in ship design. In all probability the building, maintenance and crewing of large complex oared warships was beyond the capacity of the later Empire.

Two hundred years later the Eastern Emperor Justinian was using the same simple triacontor derivative as the mainstay of the Byzantine navy. In its new incarnation the triacontor came to be known as the Dromon, or racer (585) (55) (583) (581). It would be unwise to push too far the implication that the Dromon was a lineal descendant of the 8th century BC triacontor or pentecontor. The latter were, after all, simply open rowing boats with certain structural characteristics determined by the means by which they were built and the environment in which it was intended to be used. The Dromon is more accurately a product of reverse evolution, paring away the complexities of large galleys in search of simpler and more cost effective solutions. In the process the technology of the triremes and the polyremes was lost, never to be recovered, and the Dromon provided a foundation for a new cycle of naval development which produced ships which had little or no lineal connection with those of antiquity. “
Posted by Mitch Williamson at 10:41 AM