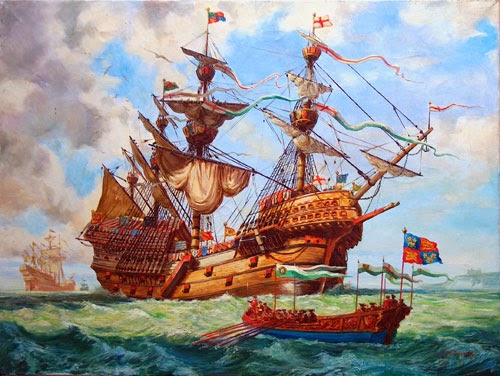 I never saw so large and so beautiful a construction’ Luca di Masa degli Albizzi, Florentine Captain of the Galleys, 1430.

The greatest of all medieval ships, Henry V’s the Grace Dieu was a remarkable vessel of a similar size to HMS Victory , although with her towering castles she looked very different. Launched in 1418, she was more than two hundred feet long and had an estimated displacement of 2,750 tons. Her main armament consisted of archers who would fire down on enemy vessels from the imposing forecastle. In addition lumps of irons were hurled onto the ships below. She held the distinction of being the last ship to be built for an English king for fifty years.

On account of her undistinguished career, the size and design of Grace Dieu have attracted considerable criticism. In fact when she was completed, the role she was intended to perform no longer existed. Grace Dieu was the last of Henry V’s large ships including Trinity Royal, Jesus and Holy Ghost of the Tower. They were built to combat the formidable Genoese carracks, allied to the French, which contested control of the English Channel. The forecastle of Grace Dieu was fifty-two feet high and would have eclipsed the Genoese vessels, but by 1420 Henry had achieved undisputed mastery of the Channel.

Grace Dieu sailed on one voyage from Southampton in 1420 under the command of William Payne and was then laid up with the other large royal ships at Burlesdon on the River Hamble. There is no evidence she went to sea again, but nevertheless made a considerable impression on those who saw her. She came to a rather sad end, catching fire and burning out on the Hamble in 1439. No one believed the size of the ship until the wreck was surveyed in 1933. Previous examinations had wrongly concluded it was either a Danish galley or a mid-nineteenth century merchant ship.

Further reading:
Posted by Mitch Williamson at 10:17 AM