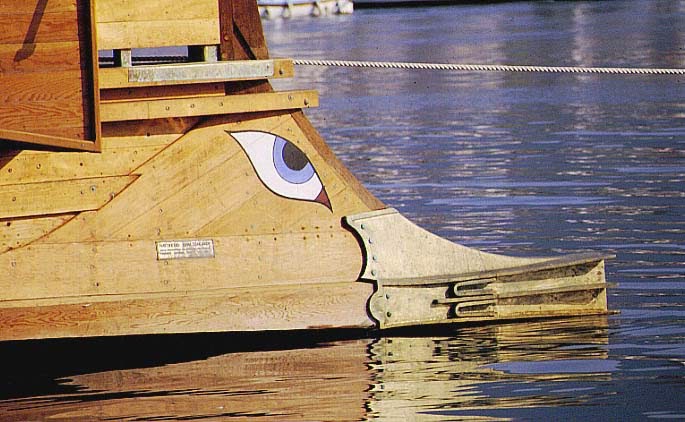 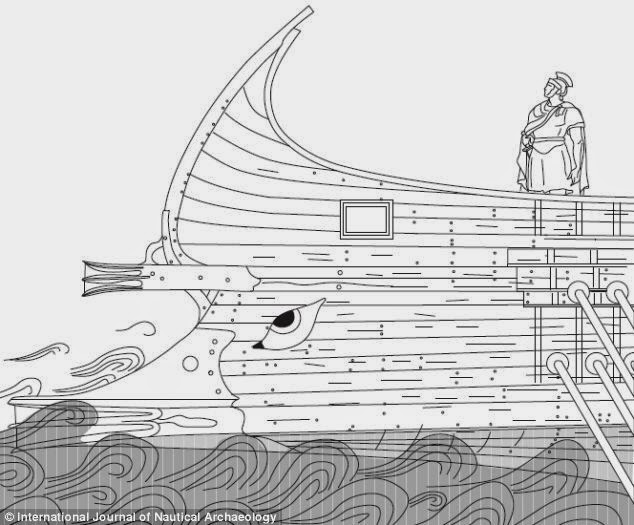 For centuries the pentecontor, the 'fifty-man' ship with a single bank of oars, was the standard Mediterranean warship. This vessel was very long and slender, expensive to build, hard to manoeuvre and not very seaworthy, especially when using the great technological innovation of ninth-century naval warfare, the ram. The ram, a heavy beam sheathed in bronze and attached to the keel under the water-line, first appears in art in about 850 BC.

It seems to have been a Greek invention. With the addition of the ram, the ship itself became an instrument of war, rather than just transport or a platform for warriors. A well-trained crew could rapidly bring their ship about to ram the relatively unprotected stern or side of an enemy vessel, then back water to let water in, swaluping the enemy craft: unballasted lightweight fighting ships were actually too buoyant to sink. A clever crew could even hope to shear off the enemy's oars with their vessel, passing close beside the opposing ship and pulling in their own oars at the last second. Their victims would be left unable to manoeuvre.

Rams in Battle
The first recorded battle won by ships using rams was in 535 BC, but they must have seen service well before that time. In this battle, the Phocaeans (inhabitants of a Greek city-state who had resettled in Italy) met a combined Carthaginian-Etruscan fleet twice the size of their own off the coast of Sardinia. The Phocaeans won the day, thanks to a very high level of training that enabled the whole fleet to penetrate through the enemy line, then swivel and ram the sterns of enemy ships. This manoeuvre - the diekplous or 'breakthrough' - is one of the two main naval manoeuvres made possible with the ram. The other, the periplous ('sailing around'), was easier, running ships around the enemy's flank to take his line from the rear.

Use of a ram puts a premium on speed sufficient to penetrate an enemy hull while avoiding the enemy's own rams. But how to increase speed? The only source of power available during battles was human muscles. An ambitious ruler could not simply increase muscle power by increasing the length of his ships to contain more oarsmen. The pentecontor was already disproportionately long and correspondingly unseaworthy. So already in the eighth century BC, there was experimentation with adding a second level of oars, creating a bireme, a two-level vessel in which two oars could operate in the same length of ship. The oldest picture of a bireme is an Assyrian relief from Sennacherib's palace in Nineveh, dating to 701 BC. The new ships were at least one-third shorter and more compact and sturdier than single-banked galleys, while having the same amount of muscle power available to move them in the water. From the bireme it was a short step to the trireme, a three-banked ship rowed with one man to an oar, seated in three ranks: in the hull, at the deck level and on an outrigger that projected from the gunwales over the water. The trireme, with 170 rowers propelling it at speeds of up to 10 knots for short periods, became the dominant battle ship of the ancient world. The Olympias, a very impressive replica trireme built in 1987, has demonstrated the great manoeuvrability and power of these vessels. The replica is seaworthy under both sail and oar, and can travel for hours at 4 knots, with half the crew rowing at a time. It can execute a 180-degree turn in one minute, with a turning arc no wider than two and a half ship lengths. Clearly this was a ship to be feared.

Little use was made of this innovative technology for a long time, however. The problem was cost. It is very expensive to build and outfit a trireme; even more expensive was paying the wages of the rowers. The oarsmen required months of intensive training to be able to work as a team. Contrary to popular fiction, these rowers were almost never slaves, both because the oarsmen might be required to fight and because it was simply too expensive to buy and maintain slaves for occasional naval use. Instead the crews of warships were recruited from among the poorer citizens, who were unable to afford the heavy equipment required for infantry fighting or the time away from their regular work, unless they received wages. Between the cost of the ships and the cost of the rowers, only a developed state with strong economic organization could maintain a fleet. In the Mediterranean, political structures which had sufficiently developed to support a navy did not exist anywhere except Egypt and Syria before about 500 BC.
Posted by Mitch Williamson at 12:51 PM